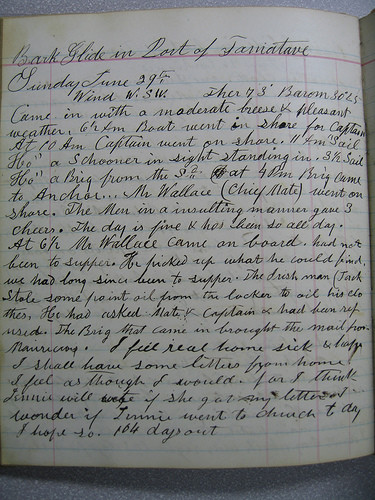 The Beinecke Library has acquired a manuscript journal kept by Charles Benson, an African American sailor who served as steward on board the Salem, MA, based merchant vessel Glide, during a voyage to and from Madagascar in 1879 and including details of a second voyage in 1880 from Boston to Zanzibar. Benson, a member of a prominent black family in Salem, began his career as a sailor in the 1850s when he was a young man. The journal entries demonstrate Benson’s years of experience at sea (in his 50s, he was the oldest man on board the Glide), his knowledge of medicine, nutrition, sailing, weather, and other practical matters important to any sea-faring man. The journal also records Benson’s inner life, his family conflicts and difficulties, and his criticism of other sailors and, indirectly, of Captain Beadle and his leadership. In addition to his writings, Benson has added drawings, images clipped from periodicals, and other ephemeral documents to the journal. Images: Pages and inserts from the Charles Benson journal at the Beinecke Library.