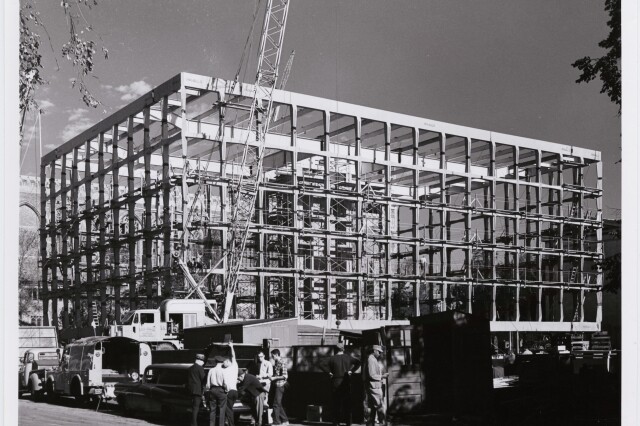 The Beinecke Rare Book & Manuscript Library inspires engagement with the past, in the present, for the future. One of the world’s largest libraries devoted entirely to rare books and manuscripts, it is Yale University’s principal repository of literary archives, early manuscripts, and rare books.

Designed by Gordon Bunshaft of the architecture firm Skidmore, Owings & Merrill, the Beinecke Library opened in October 1963. It was the gift of three Yale alumni—Edwin J. Beinecke, 1907; Frederick W. Beinecke, 1909S; Walter Beinecke, 1910—and their families, who intended it as “a symbol of the loyalty and devotion of three brothers” and as “a source of learning and…an inspiration to all who enter.”

Bunshaft conceived of a cathedral-like exhibition hall that continues to inspire today. More than 200,000 visitors come through the main revolving doors each year from across New Haven, around the nation, and beyond to see the building and its permanent and special exhibitions and to attend concerts, readings, and conferences. Through its vast digital library and through books and essays published from research, the Beinecke Library reaches millions more online and in print.

Special public exhibitions are arranged throughout the year and are open to all without admission charge. The Gutenberg Bible, the first Western book printed from movable type, and John James Audubon’s Birds of America are on permanent public display on the mezzanine. On the ground floor, visitors can see the 1742 Library of Yale College, the first books in the original Yale library, as well as a collection of incunabula, the earliest printed books in the West, from 1455 to ca. 1500.

The building’s design includes a six-story glass-enclosed tower of book stacks, holding approximately 180,000 volumes, and large “windows” made of translucent Vermont marble panels, an inch and a quarter thick, in a Vierendeel truss of steel clad in granite. The marble panels protect the collections from damaging direct sunlight while absorbing and diffusing the exterior light in warm hues on the interior.

The exterior framework gestures to the golden ratio: fifteen marble blocks run across the face of the building, five run vertically, and ten run along its depth, representing the ratio of 3:1:2. This is also a nod to the collections, as the pages of many early books and manuscripts are laid out in this proportion, considered pleasing to the eye and reverential to the text.

The research level and most of the stacks are on two underground floors that extend beneath the plaza. Registered readers may consult the collections directly in the reading room. The Beinecke Library welcomes nearly 10,000 research visits annually, with about half from Yale and half from beyond campus. The library serves as a nexus for original scholarship in a wide range of fields: from literary and cultural studies to the history of science, music, theater, and art; the history of the book, photography, graphic design, and architecture; social, intellectual, and political history; medieval, Renaissance, and eighteenth-century Europe; American literature; Western Americana; nineteenth-century imperialism; African American culture; British literature; gay, lesbian, and transgender studies; transatlantic Modernism; postwar counterculture; contemporary American poetry; and more.

The courtyard adjacent to the reading room features a sculpture garden by Isamu Noguchi in an assemblage with representations of the earth (pyramid), sun (circle), and chance (cube). The sculptor described it as being “nowhere, yet somehow familiar. Its size is fictive, of infinite space or cloistered containment.”

In 2015 the library’s Technical Services—cataloging, archival description, acquisitions, accessioning, and digitization work—consolidated operations in a state-of-the-art facility at 344 Winchester Avenue. The Bunshaft building underwent a comprehensive renovation in 2015–16, including conservation and restoration of its historic architecture and replacement of security and mechanical systems. The renovation doubled available classroom space. The library now hosts more than 600 class sessions each academic year, with courses from more than 50 Yale academic departments and schools and nearly 8,000 students attending.