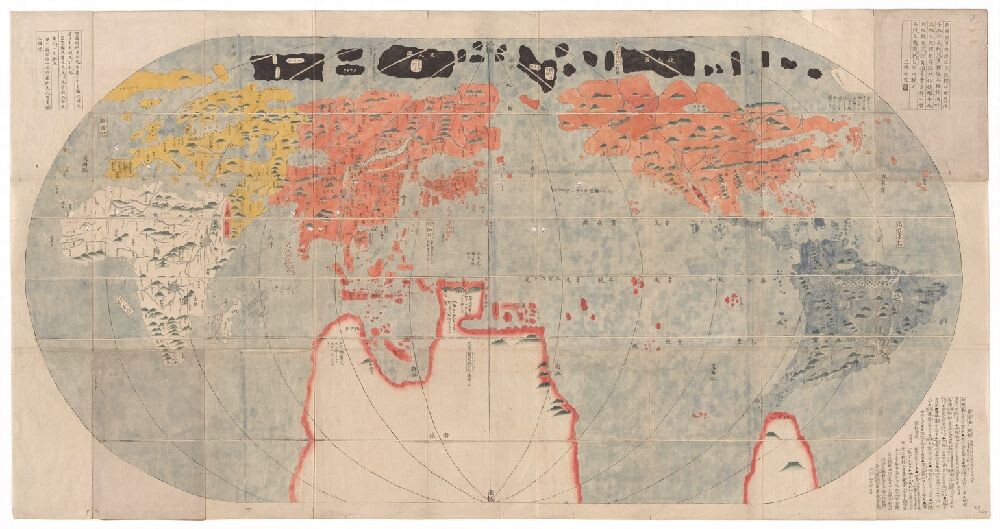 Asian world maps before the modern period are extremely rare and Yale has no manuscript maps that date earlier than 1800. From that date forward, we have several printed maps that help to understand how some Asian cultures viewed their position in the world. The maps in the these cases are from China, Korea, and Japan. Korea had an ancient indigenous mapping tradition that was replaced by the importation of Chinese maps during the medieval period. The maps in the left and center cases are derived from a single map that was originally offered to demonstrate a Buddhist pilgrim’s route through Asia. As in the West, most Asian cultures had a verbal tradition rather than one of a graphic-cartographic type,  so maps in the premodern period were not common. Maps helped explain the spread of Buddhism from India to China, Korea, and Japan, and many such maps are oriented with East at the top; most in the collection at the Beinecke Library, however, are not. Korea is shown with a great number of mountains and rivers, which is also how the territory was described in literature.

In the same manner that Europeans took Jerusalem or the Mediterranean to be the center of the world, the Chinese chose to depict China at the center of their world maps, with significant regions such as Japan, Korea, and India in close proximity. Like European maps, these examples often highlight areas of religious importance, but they also are less concerned with trade.

The center case contains a very large map of Korea that shows the influence of Chinese and European maps, although it remains within the framework of the premodern mapping tradition. The Korean map on the right was designed to help administer Korea during the Joseon dynasty (1392–1897); the one on the left, like the Chinese maps, is based on a Buddhist pilgrimage account, and it helped place the important areas of the world in a cultural context, even if the regions on the map are vaguely defined.

The maps on the right are Japanese, and although they were made during different periods, each places Japan at its center. North and South America are poorly defined or marginalized, and Japan, especially in the bottom-right example, is inflated well beyond geographic proportion. 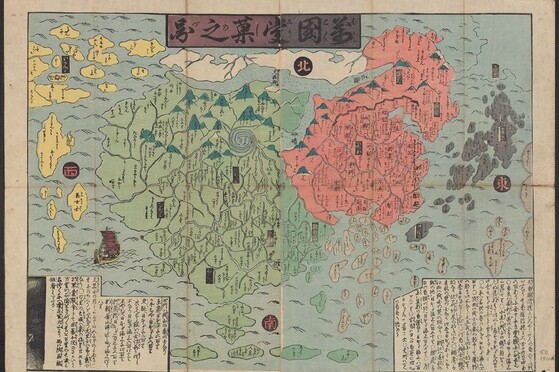 50 1800A Map of Asia and Europe, presumably based on Buddhist or Tibetan Sources

13 1830 Korean map of the Eastern Hemisphere