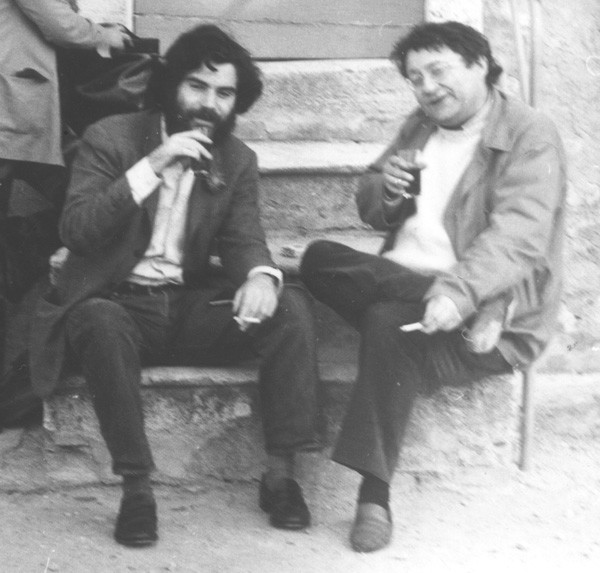 The Beinecke Rare Book & Manuscript Library at Yale University today announced its acquisition of the papers of Italian writer and activist Gianfranco Sanguinetti, a key figure in the Situationist International avant-garde protest movement in the 1960s and 1970s.

The archive features more than 650 letters between Sanguinetti and Guy Debord, the French theorist, writer, and filmmaker who founded the Situationist International [SI], a group of intellectuals and artists that blended Marxist theory and 20th century avant-garde art into a comprehensive critique of capitalist society. The majority of these letters have never been published.

“It would be extremely difficult to write a complete history of the Situationist International without this archive,” says Kevin Repp, curator of modern European books and manuscripts at the Beinecke Library. “Sanguinetti was a driving force in the movement and his papers, including his rich correspondence with Debord, provides extraordinary insight into crucial moments of the European post-war counterculture.”

The archive consists of 48 boxes of correspondence, writings, documents, ephemera, and photographs.  The manuscript material is remarkably dense and substantive, documenting not only the relationship between Debord and Sanguinetti, but also the far more extensive network of friends and members of the SI as well as their concrete links to social and cultural-political activism in this period.

The SI’s theories and tactics influenced the May 1968 uprisings in France – a period of general unrest marked by general strikes and occupations of factories and universities. They continue to influence radicals, and social movements.

Sanguinetti wrote to Debord in the 1968 uprisings’ aftermath.  A close friendship quickly ensued, with Sanguinetti playing a leading role in the formation of the Italian section of the SI.  Sanguinetti became Debord’s primary source of news about Italian social and political unrest, which seemed a perfect proving ground for SI tactics, and the two continued to collaborate long after the movement was dissolved in 1972.

The archive includes an autograph manuscript and multiple corrected typescripts, bearing annotations in Debord’s hand, of Sanguinetti’s most influential work: “Rapporto Veredico sulle ultime Opportunità di salvare il Capitalismo in Italia” (“The Real Report on the Last Chance to Save Capitalism in Italy”). Published in 1975, the “Rapporto” is pseudonymous pamphlet written from the aristocratic perspective of “the Censor,” a well-informed Italian Conservative. It accuses the Italian state of orchestrating the Milan bombings of 1969 in order to rally public opinion against protest movements.

The archive includes preparatory notes and outlines of conversations documenting Debord’s role in conceiving and composing the pamphlet.

Other highlights include drafts of the statutes of the Italian section of the Situationist International; original manuscripts, typescripts, and proofs of Internazionale Situazionista, no. 1 (sole issue published, 1969), the Italian section’s journal.

The archive also features the original manuscript of “Rimedio a Tutto” (“Remedy for Everything”), Sanguinetti’s book about the Movimento ‘77; a wave of protest that swept across Italy in 1977.  Most of the 466-page manuscript is unpublished, though two chapters were published in 1978 as  “Del Terrorismo e dello Stato” (“Terrorism and the State”).

The archive is part of the Beinecke Library’s major collection development initiative to document the postwar avant-garde and counterculture in Europe, including movements such as the Situationists, Lettrism, Sound and Concrete Poetry, Provos, and student and autonomist movements in France, Germany, and Italy, particularly relating to the Movimento del 77.  Major archival acquisitions include the Bismuth-Lemaître papers, Gil J. Wolman papers, Jacqueline de Jong papers, Henri Chopin papers, and Gianni Bertini papers.

The Beinecke Rare Book & Manuscript Library is one of the world’s largest libraries devoted entirely to rare books and manuscripts and is Yale’s principal repository for literary archives, early manuscripts, and rare books. Researchers from around the world use the Beinecke’s extensive collections to create new scholarship.