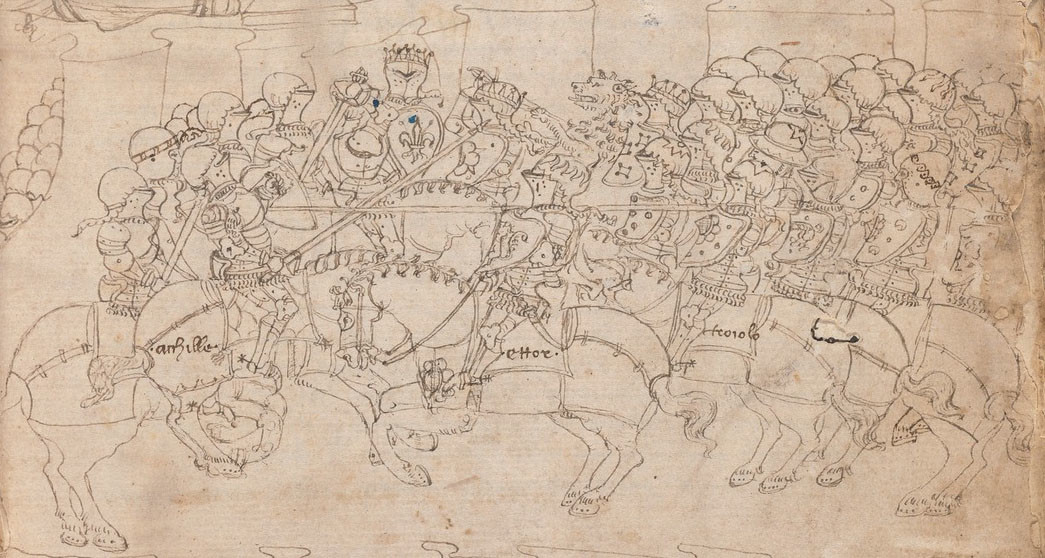 From the Prisons of Napoli to New Haven

In this, our first installment, we are pleased to present Beinecke MS 1137, acquired in 2007. MS 1137 is a fifteenth-century, Italian manuscript on paper, that contains two primary texts: an Italian translation of Guido dell Colonne’s Historia destructionis troiae and Boccaccio’s Filostrato. This dramatic artifact hails from the prisons of Napoli, where a certain Florentine named Tedine di Ghiugliadore finished copying the Filostrato on January 30, 1413 and the Historia on April 10, 1414.*

Despite the order in which they were copied, Tedine chose to bind the Historia first, prefacing it with a full-page pen and ink illustration of the Trojan war.** In this exquisitely detailed image, three ships approach the walled city “Tenedon” while Greeks and Trojans face off outside the city walls. In a charming transposition, Tedine not only re-imagines the epic warriors as medieval knights, but gives the Florentine coat-of-arms to the brave warrior who approaches Achilles in the foreground. Thus, Tedine casts himself and his Florentine comrades as the noble but doomed Trojans. In this context, Boccaccio’s Filostrato – the tragic tale of a Trojan hero who looses his love to the Greeks – makes perfect emotive sense: this fallen soldier seems to have called on Boccaccio as a literary balm, consoling himself by empathizing with Troilo’s tale of personal loss in the midst of epic turmoil.

** For a complete digitized copy of the manuscript, and an image of this illustration, see our digital library.