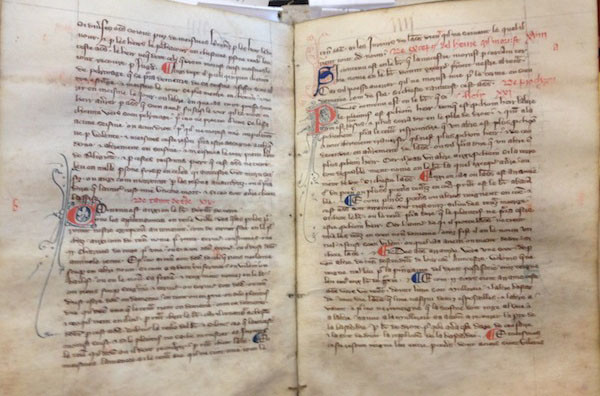 From Westminster to New Haven

Osborn MS 185 Item 11, acquired in 2013 as part of the famed Anthony Taussig collection, is a fourteenth-century English manuscript containing an incomplete copy of the Britton. Written in Anglo-Norman, the Britton is derived from the thirteenth-century legal treatise known as the Bracton, and was used from Edward I’s reign as a handy reference book for the underpinnings of English Common Law.

This copy of the text seems to have been made in London, in a copying center that had at least two exemplars to draw from: the order of the text and the order of the titles in the rubrication do not match. The rubricator in some cases noticed the discrepancy between this text and his exemplar, and attempted to fix it. For example, on folios 41v-42r (see image above), he renumbered two titles and placed the letters “b” and “a” next to those titles in an attempt to reorder the text for his reader.

The popularity of this text, as implied by the text’s formulaic layout and the multiplicity of exemplars used to make it, may encourage us to reconsider the text’s importance to the teaching of Common Law in the Inns of Court. A second manuscript copy of the Britton on Yale’s campus (Yale Law MssG B77 no.1 ) features flourished initials, textual formatting and folio size similar to Osborn MS 185 Item 11, only heightening the sense that this book was regularly produced and widely circulated.*

This manuscript also boasts several interesting codicological features: on folio 46r a tree of consanguinity has been drawn in by the scribe and rubricated by the rubricator (see Folio 46r, below); unlike most copies of the Britton, this manuscript features regular rubrication and several examples of beautifully flourished initials (see Folio 21v, below); furthermore, this manuscript shows signs of attention in the early modern era. As well as the medieval stitching on the spine of the book, stab stitching can be seen in the left margin of the folios (see image, below).

* Thanks to Mike Widener, Rare Book Librarian & Lecturer in Legal Research Lillian Goldman Law Library, for bringing this manuscript to our attention.

Flourished Initials Unlike many other copies of the Britton, Osborn MS 184 Item 11 features careful rubrication and beautifully flourished initials. This text was important enough to its original owner that significant resources were used to make it a beautiful – as well as practical – reference work.

Early Modern Presence: The stab stitching in this manuscript suggests continued care of and attention to this text into the early modern era.