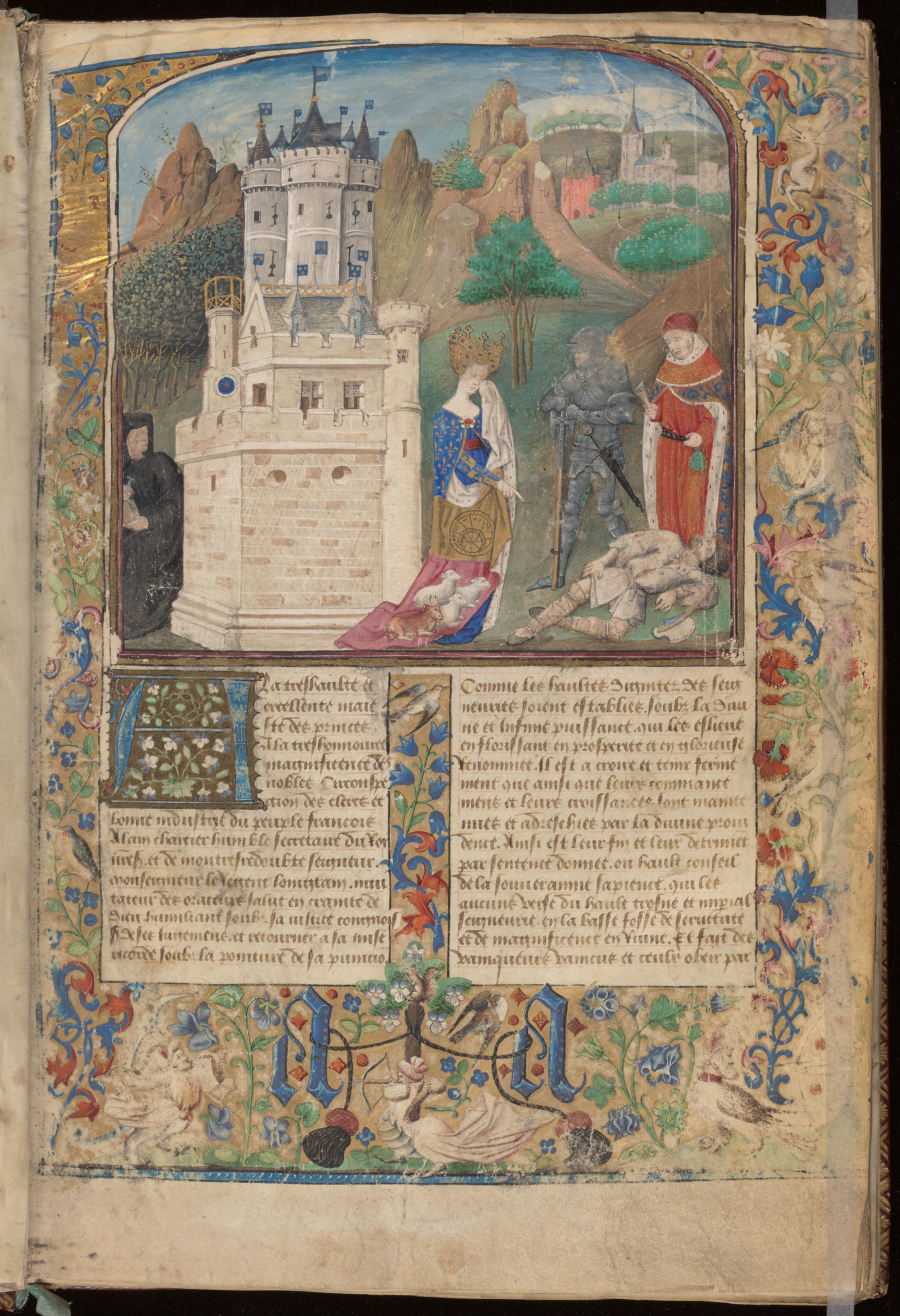 The Beinecke Library recently acquired the Clumber Park Chartier, considered the finest illustrated manuscript of Alain Chartier (c. 1386-c. 1430), one of the most influential poets of the later Middle Ages. The manuscript, made in France circa 1455-1460 and circa 1475, is available for research by scholars and students at the library. The complete work has also been digitized and can be viewed on the Beinecke digital library.

“The Clumber Park Chartier is a marvelous addition to the Beinecke Library’s deep holdings of medieval illuminated manuscripts,” said Edwin C. Schroeder, the library’s director, “and this extraordinary French manuscript follows the recent major acquisition of the Takamiya Collection of medieval English manuscripts, celebrated last fall with a very popular public exhibition. We are delighted to make the Clumber Park Chartier available to scholars working in the library and, likewise, to make it available to the public online.”

This new acquisition joins more than 90 medieval French manuscripts held by the Beinecke Library and is the earliest manuscript in the library of work by Chartier.

“The field of medieval studies has an amazing vitality right now,” according to Raymond Clemens, curator of early books and manuscripts at the Beinecke Library. “We certainly see that here at Yale, in the number and energy of graduate students, faculty, and visitors keen to explore and understand the dynamic world that medieval manuscripts make available. The Clumber Park Chartier is a particularly gorgeous volume in terms of its art and a particularly significant volume given the texts it contains. I am sure that it will both be the subject of intense scholarship for itself and a gateway for scholars and visitors into the vast and growing collection of medieval manuscripts, in many languages, here in the Beinecke Library.”

Chartier was a civil servant under Charles VI and Charles VII, including service as notary and secretary to the latter from before his accession. Christie’s describes Chartier as “one of most influential late medieval poets and authors, writing political-social treatises in Latin and prose and verse in French, where he is ranked with Dante for his influence on the development of the vernacular.”

“He is now especially famed for his innovative and provocative exercises within the conventions of love poetry,” Christie’s notes. “The ‘Belle Dame sans Mercy,’ in particular, provoked a lively debate over the freedom of the Lady to refuse her suitor, which Chartier seemed to deny … Revered and imitated throughout the 15th and 16th centuries, he became the epitome of medieval chivalry and courtly love in the 19th century.”