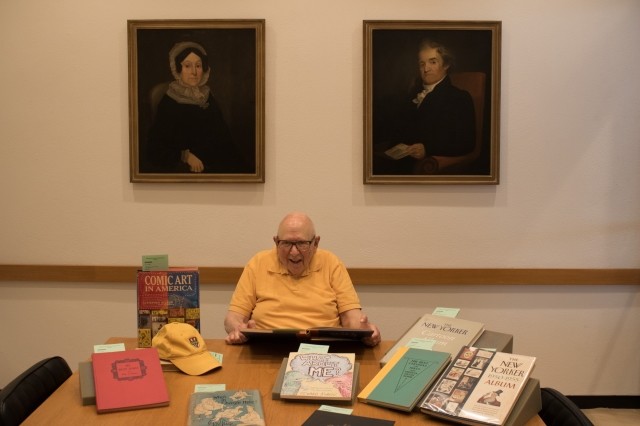 William “Bill” Nightingale ’53 has been an active alumnus of Yale for 65 years. Among his latest connections with campus, Nightingale has given his collection of more than 300 cartoon books to the Beinecke Rare Book & Manuscript Library.

The Beinecke Library has long held interesting and important books of humor, from the tales of Poggio Bracciolini’s Facetiae in a manuscript from Lombardy ca. 1450, to Rodolphe Töpffer’s Les Amours de Mr. Vieux Boisprinted in Geneva in 1839, to Cold Fusion, from McSweeney’s in San Francisco in 2008, attributed to “Dr. and Mr. Doris Haggis-on-Whey.”

The archival collections are likewise rich in wit and humor, with highlights including the Helen E. Hokinson Cartoons for The New Yorker, 15 boxes with more than 340 cartoons  cover drawings, and concept sketches in ink, pencil, watercolor, crayon, and charcoal on paper that were created for The New Yorker magazine by Helen E. Hokinson between 1926 and 1949, given to the library in 1980 by her longtime collaborator, James Reid Parker, who was trustee for her estate, as well as nine boxes of Parker’s own papers, many documenting his work with Hokinson, donated in 1998 to the Beinecke Library by Mr. and Mrs. Kenneth Nesheim.

The Hokinson and Reid papers are among a substantial and growing set of collections and archives of the literary and performing arts of American humor, with other stand-outs including the Saul Steinberg Papers, the Garry Trudeau Papers, and film and television collections such as the Steven H. Scheuer Collection of Television Program Scripts and the African American Television Scripts, both of which document many well-known situation comedy programs.

“The research interest in American humor writing continues to grow as historians and literary critics cite the impact of comedy, cartoons, and other amusements on the fabric of American life,” says Timothy Young. “The Beinecke Library’s collections of writings related to humor continue to grow. We hold extensive runs of magazines, books of essays, and comic books - and have recently added the papers of such brilliant minds as Tom Davis and David Rakoff. The William Nightingale Yale 1953 Cartoon Book Collectionbuilds up our holdings documenting the world of 20th century sophisticated cartooning with great flair.”

The Nightingale collection features an early printing of Peter Arno’s Parade, first published in 1929, and includes works down through the 20thcentury into recent years. The books in the Nightingale collection serve as good scholarly accompaniment to other collections in the library, allowing researchers to consult its printed works together with serials held by the Beinecke Library and the archives of relevant artists and writers. For example, the Nightingale collection includes four books of Hokinson’s cartoons, from the first edition of When Were You Built, 1948, to the posthumously published There are Ladies Present, 1952, that complement her papers and permit readers to see her sketches alongside later published versions. “My collection includes the great cartoonists who made The New Yorker their home from 1930-2000, and set the standard for cartoons in the U.S.,” he explains.

“My interest in cartoon books started with grabbing Peter Arno and Charles Adams volumes from my parent’s library when I was in 7th and 8th grades. It continued at a slow pace until I got to college,” recalls Nightingale. “My desire to collect was spurred on by my need to search for missing volumes of my favorite cartoonists. As a cartoonist, myself, I enjoyed getting my cartoons in my high school newspaper and at Yale I became the cartoonist for the Yale Daily News, thanks to classmates, Bill Donaldson and Jim Thomson, who ran the News and to Gaddis Smith, the next year’s chairman. I was also the cartoonist for the Fort Dix Post, where I contributed weekly gag and sports cartoons.”

Nightingale has had a long career in the world of advertising and media. Trained at McCann/Erickson, he served as media director at three agencies and is currently chairman/media strategy at Cason Nightingale. He donated his books to spur the continued growth of cartoon humor in the library’s collections – and with hopes that his books will have both scholarly and personal benefit for current and future generations of students. “My goal was to have Yale students recognize the value of humor in their lives and to be able to grab a volume as a break from studying at the library,” the alumnus notes.

“Alumni have been essential to building library collections at Yale from early on in the 18thcentury to the present,” says Beinecke Library Director Edwin C. Schroeder. “Bill Nightingale’s gift of his cartoon book collection is fitting for Yale, given our longstanding interest in comedy and cartoons – and his gift is a whole lot fun, too.”

A version of this story was published in YaleNews on August 7, 2018.