Beinecke Library reopens, a ‘gem’ for scholars and students 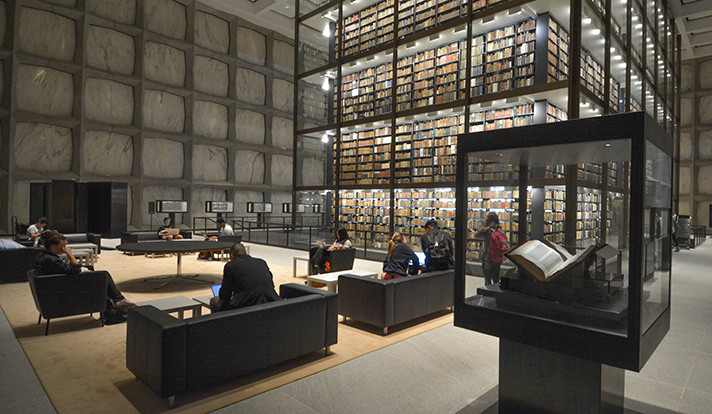 Students studied on the couches on the Beinecke’s mezzanine level on reopening day. (Photo by Michael Marsland)

Researchers returned to the reading room of Yale’s Beinecke Rare Book & Manuscript Library on Sept. 6 following a 16-month renovation that has prepared the iconic building for its next chapter.

“It was exciting to walk through the front door again,” Beinecke Director Edwin “E.C.” Schroeder said. “It looks very much the same, but in many ways it is different. We have new classrooms and new exhibit preparation space. We’re excited to begin using these new spaces.”

The project doubled the number of classrooms in the library from two to four. One of the new classrooms will function as a lab space in which students will be able to study the physical structures of books and experiment with inks, papermaking, and printing.

Yale faculty toured the new classrooms during an open house on Sept. 6.

Bruce Gordon, the Titus Street Professor of Ecclesiastical History at the Yale Divinity School, said he was “very excited” to bring students to the library to study collection material.

“It is always a memorable experience for the students,” Gordon said. “It transforms a class when you can go beyond a textbook to see what a book or a woodcut in the 16th century looked like. I’m already imagining bringing students here.”

Yale College Dean Jonathan Holloway praised the addition of the two new classrooms, which flank the access services desk across the courtyard-level lobby from the reading room.

“The Beinecke is an incredible gem for scholars, but too often undergraduates don’t discover it until their senior years,” Holloway said. “The addition of the classrooms is a lovely opportunity for undergraduates to become exposed to the library and its world-class resources.”

The library operated a temporary reading room and classroom in Sterling Memorial Library from May 2015 through July, providing researchers, faculty, and students access to collection material. The libraries’ access services staff would don hardhats and safety goggles to pass through construction zones on their way to retrieve collection material from protected areas in the building’s basement.

The day the library reopened, students occupied the couches and chairs on the library’s mezzanine level, surrounded by the translucent marble and the volumes lining the stack tower.

The bulk of the renovation involved upgrading the library’s mechanical infrastructure — its plumbing, electrical, heating, and cooling systems — much of which was original to the building. Machinery in the building’s sub-basement, including room-sized air handlers and chillers, was replaced with state-of-the-art equipment. The building’s security and fire-suppression systems were also upgraded. New lighting was installed in the stack tower.

Barbara Shailor, senior research scholar and senior lecturer in the Department of Classics and a former director of the Beinecke Library, said she was “eager” to return to the reading room.

“I’m a little choked up about this,” said Shailor, former deputy provost for the arts who first visited the Beinecke as an intern in 1970. “Those were a hard 16 months.”

The Beinecke will host an open house for Yale students on Saturday, Sept. 24, and will open its doors to public for a community day on Saturday, Oct. 8 from 10 a.m. to 4 p.m.

The Beinecke Rare Book & Manuscript Library, located at 121 Wall St. in New Haven, is one of the world’s largest libraries devoted entirely to rare books and manuscripts and is Yale’s principal repository for literary archives, early manuscripts, and rare books.