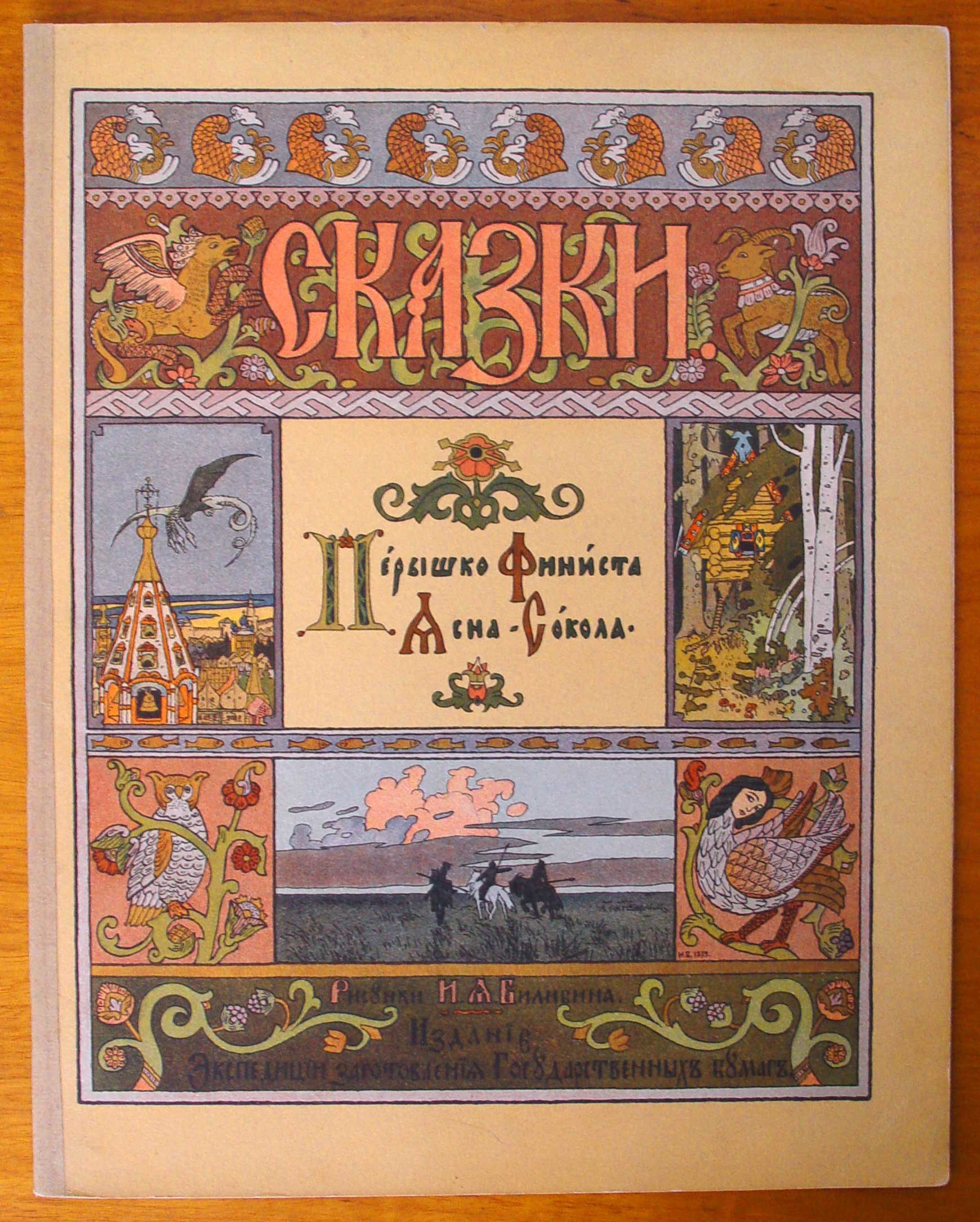 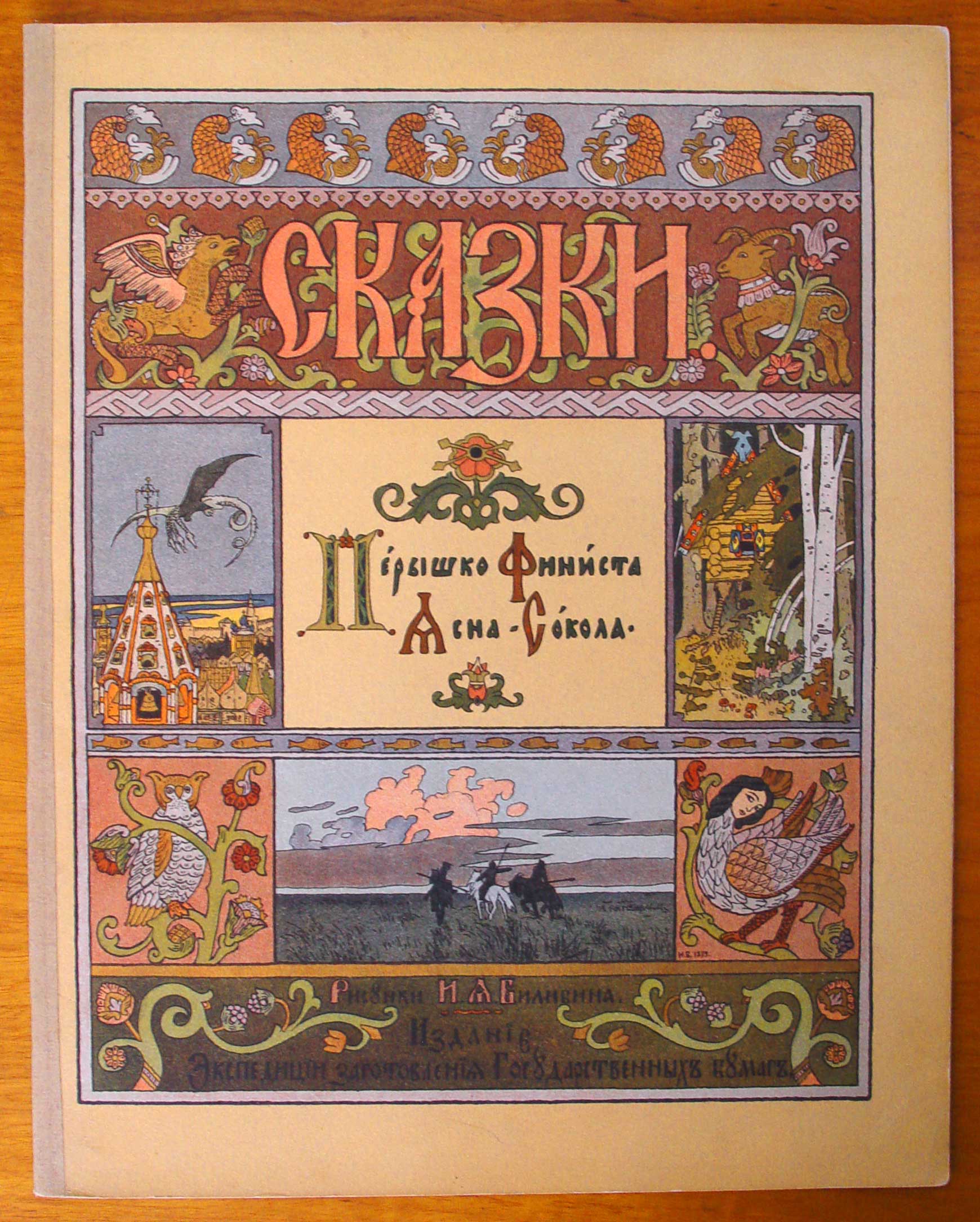 A complete set of six folktales lavishly illustrated by Ivan Bilibin expands the Beinecke’s holdings of Russian graphic art and, more particularly, the Mir Isskustva (World of Art) group. Published in St. Petersburg between 1901 and 1903, the six volumes date from the period just after Bilibin had joined the group, and several of the illustrations in them were displayed at Mir Isskustva exhibitions.Drawing on an ecclectic mix of traditional art forms–the icon, the lubok, Persian miniatures, and medievel book illustration–Bilibin fuses them together with contemporary currents of the late 19th century to create a rigid and highly stylized unity that marks the culmination of the style russe as it was propagated by the “World of Art.” 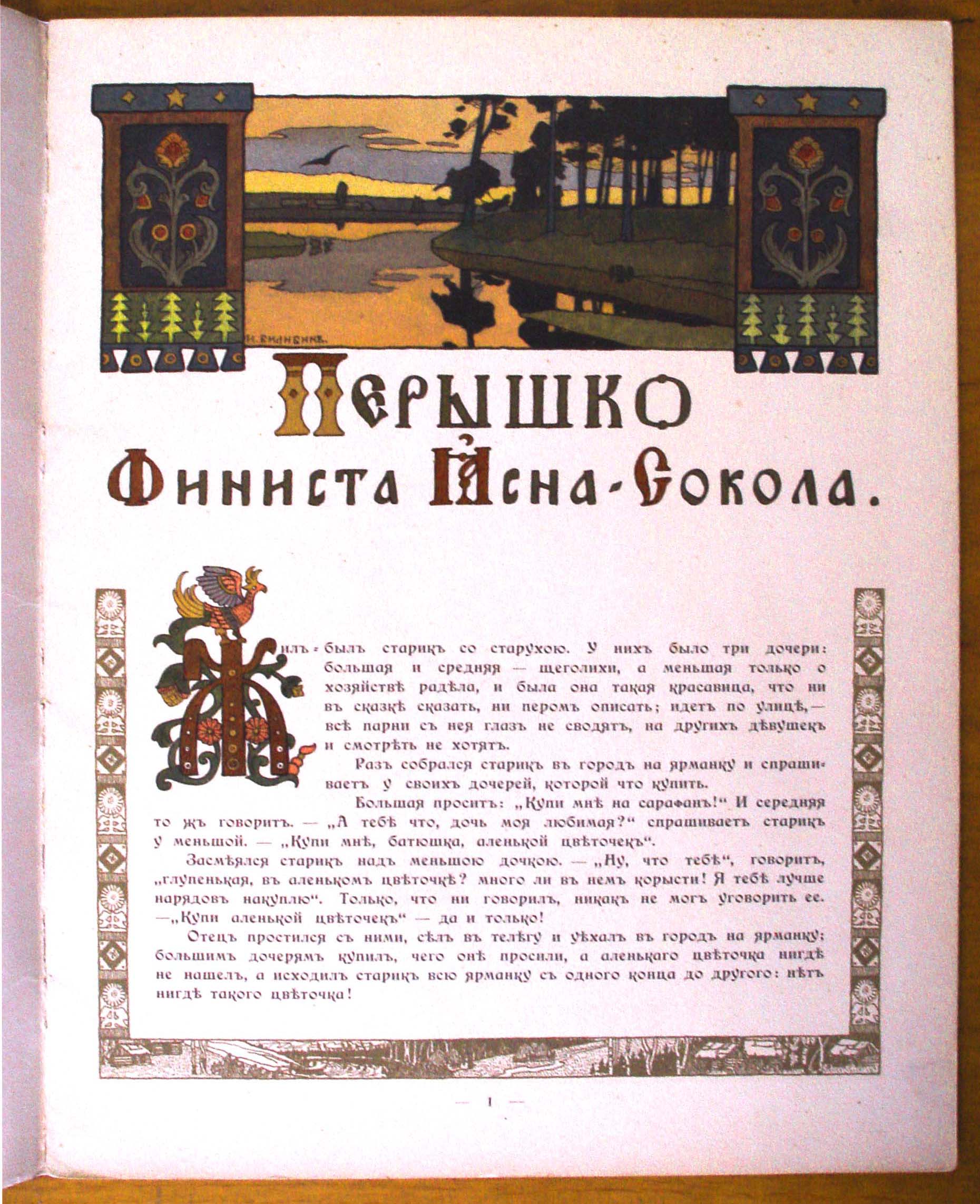 Bilibin had studied under Il’ia Repin at a private art school founded by Pricess Tenisheva, one of Mir Issustva’s most important patrons and a fervent supporter of the revival of Russian folk art at the turn of the 20th century. Introduced to the group by Leo Bakst in 1899, Bilibin wrote several important treatises on Northern Russian peasant art of the 17th and 18th centuries.  Yet while enamored of early modern sytles, Bilibin rejected all notions of attempting to revive or recreate them, insisting instead that a new genuinely Russian style could emerge only through direct engagement with modern artistic currents. Here Bilibin took his cue not so much from the English arts and crafts movement of Ruskin and Morris, but instead from the German Kunstgewerbebewegung, which likewise embraced the modern and emphasized the importance of innovation in graphic design. “[O]nly the Germans, and not the French, understand the art of the book,” Bilibin later wrote, reflecting the lasting influence of his exposure to these currents during an early study visit in Munich before the turn of the century. Like many others in Mir Isskustva, Bilibin was attracted to stage design as well as book design, and he worked on sets for Nikolai Rimsky-Korsakov’s Snegouochka in Prague in 1904 and Sergei Diaghilev’s production of Boris Godunov in 1908. When the first Russian Revolution broke out in 1905, Bilibin joined many others from the Mir Isskustva circle in contributing to  the stunningly illustrated satirical magazines that briefly flourished in the absence of censorship After the Revolution was crushed, however, Bilibin returned to a more moderate and anti-political stance. Leaving Petersburg for the Crimea in 1917, he avoided the brung of the Bolshevik revolution, and after a five-year sojourn in Egypt, he settled in Paris in 1925. Bilibin eventually returned to the Soviet Union, however, and he died in Leningrad in 1942. 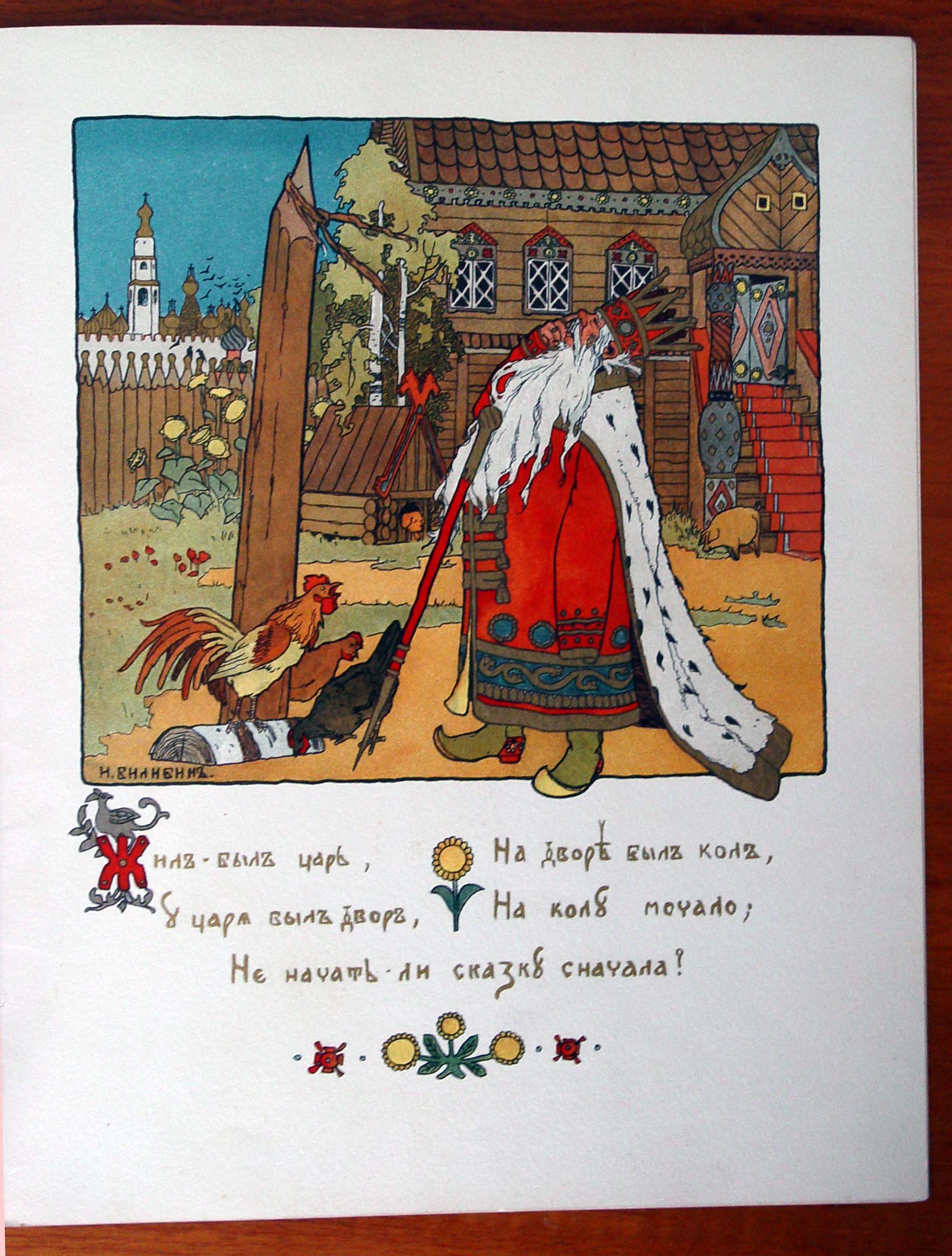 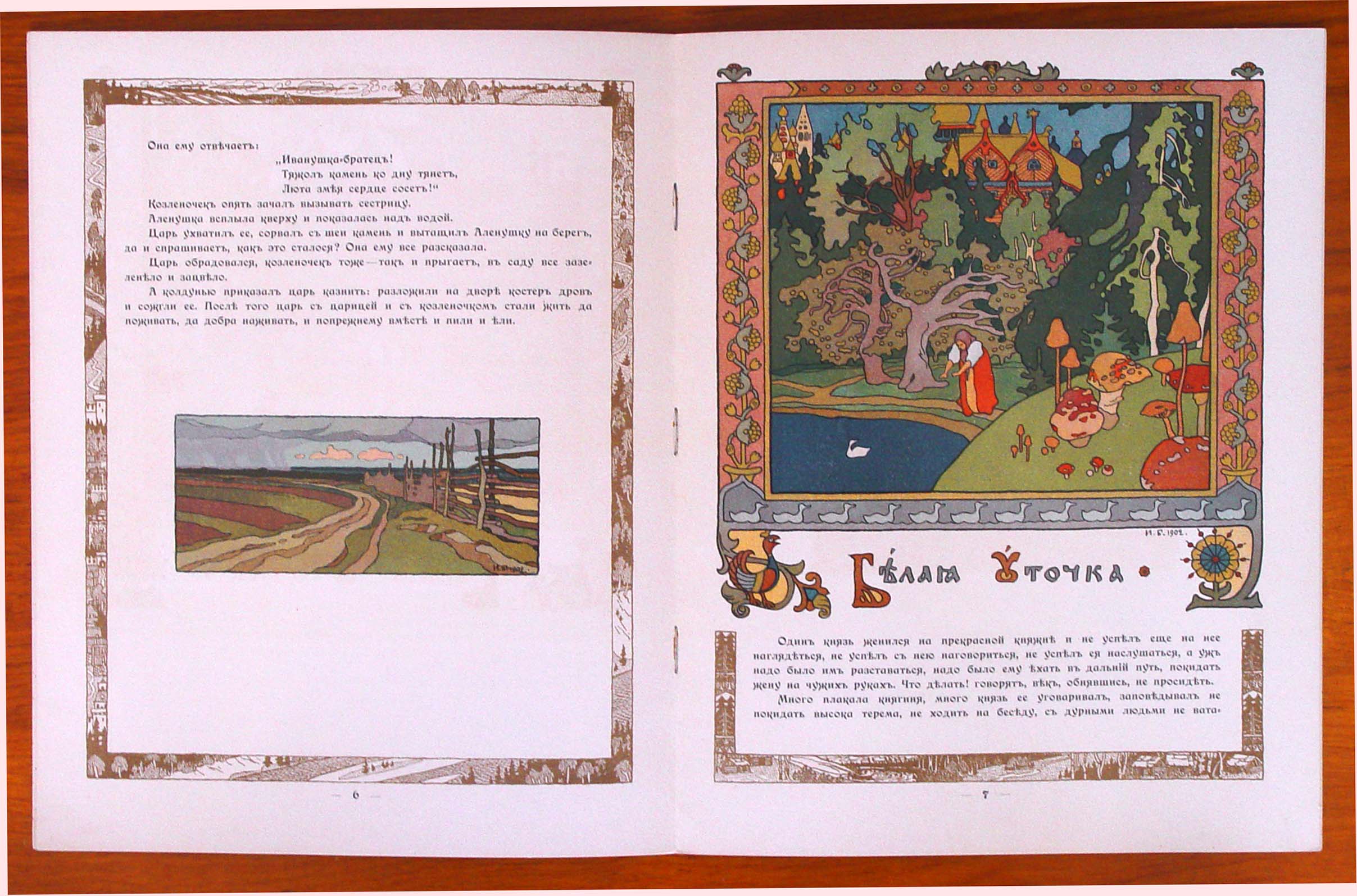 More of Bilibin’s striking images can be found, alongside those of his Mir Isskustva comrades, in Beinecke’s collection of Russian satirical magazines from the Revolution of 1905. A large portion of the collection has been digitized and is publically available at: http://beinecke.library.yale.edu/digitallibrary/russiangraphic.html.