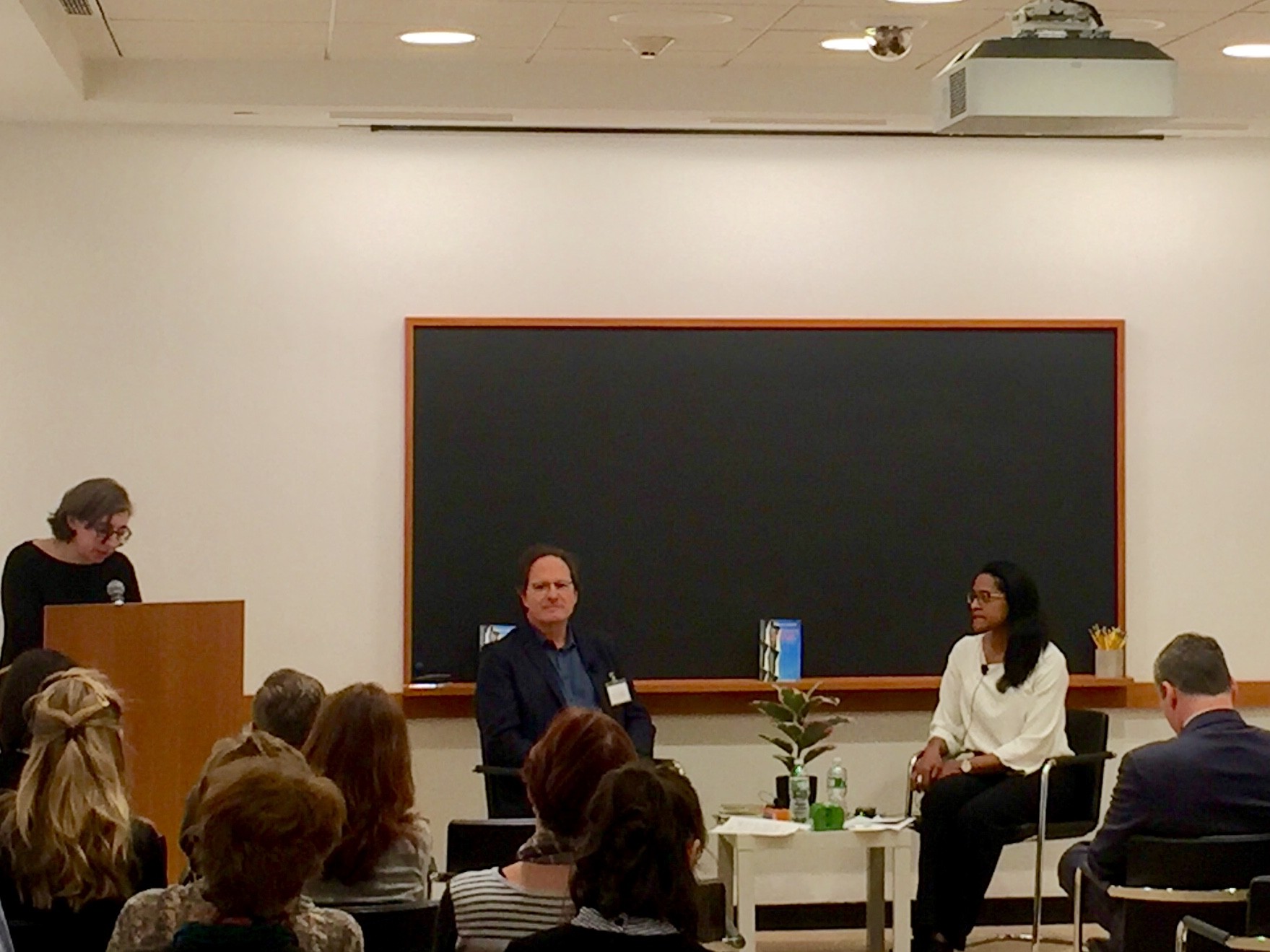 “I would not be a writer but for this place,” Emily Bernard ’89 ’98 Ph.D. said at a symposium on biography at the Beinecke Library on March 29, 2019. “I came to the Beinecke and discovered my life.”

Bernard, the Julian Lindsay Green & Gold Professor of English at the University of Vermont, was one of six noted authors in conversation at the symposium organized by Karin Roffman ’04 Ph.D., lecturer in the humanities and English and associate research scientist and scholar in American studies at Yale.

You can listen to recordings of the symposium on the Beinecke Library SoundCloud channel.

Presented jointly by the library and Public Humanities at Yale, featured three conversations on the art and craft of biography:

Attended by faculty, students, staff, and members of the public, the symposium offered insights on the “treasure hunt” that is, Bird said, the work of the biographer. The conversations also highlighted the value of the treasure, as Bird declared: “Biography is the most powerful form of history.”

Roffman said it was “very special to be able to hold this symposium at the Beinecke, where the collections are so vast and so diverse and the devotion of the library to the enterprise of creative research, thinking, and writing is deep and longstanding.”

In her introductory remarks, Roffman pointed out that “so many biographies have emerged from the study of materials found at the Beinecke that they are too numerous to name,” including most of the books published by the speakers in the March 29 conversations.

“I know that I couldn’t do my own research without this library and the forward thinking curators who acquire materials I need even before I know I need them,” Roffman said. “In teaching, too, I know I speak on behalf of my colleagues and students when I mention the thrill of being able to hold class here.”

Roffman pointed to her current undergraduate class on literary biography as an example: “It’s an incredible privilege to be able to work with original letters and manuscripts, to thumb through Langston Hughes’s desk memos, to read his first impressions of Paris, and to see these raw materials that were later used to build several important biographies of Harlem Renaissance artists … There’s such a sense of excitement and appreciation for the atmosphere that is maintained here, which makes so much learning possible.”

Nancy Kuhl, curator of poetry in the Yale Collection of American Literature, reflecting on the event, observed that the symposium “cast light not only on the breadth and depth of the Beinecke Library’s collections, on the value and cultural significance of the daily work done here, and the library’s fellowships and other special programs.”

Roffman and Bernard, Kuhl noted, first began working as researchers in the Beinecke Library when they were Yale students and both of their first books are drawn from Beinecke collections: Bernard’s Remember Me to Harlem: The Letters of Langston Hughes and Carl Van Vechten and Roffman’s From the Modernist Annex: American Women Writers in Museums and Libraries.

Roffman took a Master Class during her time as a graduate student at Yale, while Bernard returned to campus several years ago to teach a master class in the library about researching African American history and Roffman will teach one in May 2019 on literary biography.

Before she came back to New Haven to join the Yale faculty, Roffman was also awarded a Beinecke Visiting Research Fellowship to conduct research related to her next book, The Songs We Know Best: John Ashbery’s Early Life. Bernard was the inaugural James Weldon Johnson Fellow, dedicating a year in the reading room researching her second book: Carl Van Vechten and the Harlem Renaissance: A Portrait in Black and White.Roffman and Bernard’s second books were each heraldedas a New York Times notable book.

Blight, the Class of 1954 Professor of American History and Director of the Gilder Lehrman Center for the Study of Slavery, Resistance, and Abolition (GLC) at Yale, was about to turn in the manuscript for this book to his publisher when the Beinecke Library received a gift of three important letters from Douglass to a Massachusetts abolitionist. He read the letters soon after they arrived at the library and quickly revised his manuscript to incorporate quotations from them. Blight gave a talk in 2018 to an enormous crowd on the library’s mezzanine about the letters and their author to honor the 200thanniversary of Douglass’ birth.

As part of his intensive research for Custer’s Trials: A Life of the Frontier of a New America, T.J. Stiles spent time in the Beinecke Library reading room consulting numerous archives and items in the Yale Collection of Western Americana. Stiles won the 2016 Pulitzer Prize for History for his biography of George Armstrong Custer.

Langdon Hammer, the Niel Gray, Jr. Professor of English,has researched three books in Beinecke Library collections: Hart Crane and Allen Tate: Janus-faced Modernism, O My Land, My Friends: The Selected Letters of Hart Crane, and James Merrill: Life and Art,the latter named by the New York Times as one of the ten best books of 2016. He is currently researching his next book, a biography of poet Elizabeth Bishop, again making use of Beinecke collections.

Roffman and Hammer are both among the many Yale faculty who regularly teach undergraduate and graduate classes in Beinecke Library classrooms, and Blight and his colleagues in the Yale GLC often bring public school teachers and others to sessions on site with collections materials. Research conducted by students in Roffman’s semester-long undergraduate Beinecke class “Poetry and Objects” will be featured in a summer 2021 exhibition in the public exhibition hall.

Adina Hoffman, an inaugural winner of the Windham-Campbell Prize administered by the Beinecke Library,  researched her new book about novelist and screenwriter Ben Hecht (Ben Hecht: Fighting Words, Moving Pictures) at the library. She both worked in literary archives and referred frequently to rare little magazines from the Modernist era that are available in only a few libraries.

“The work of these scholars—and countless others—is rooted in Beinecke Library collections,” Kuhl said, “and it is also dependent in many ways on the work of Beinecke Library staff in all departments and on the library’s academic and research programs. This one symposium showcased so many of the ways Beinecke staff together provide access to collections through swift accessioning, detailed and thoughtful description, and robust services provided to readers; it also reflects ways Beinecke further enables research with programs that allow students to develop their skills as researchers, with fellowships that make it possible for scholars to work steadily in our reading room, and with awards that give writers time and space to work.”

Kuhl pointed out the impact this scholarship has well beyond the Yale campus: “The books by Hoffman, Blight, Hammer, Bernard, and Roffman—and countless others—expose our collections to a wide-range of curious readers who may themselves never conduct research on site. These books activate the collections for a wide audience and together with our many and varied public programs, events, and outreach efforts they make the dynamic collections we steward available broadly both now and for the future.” 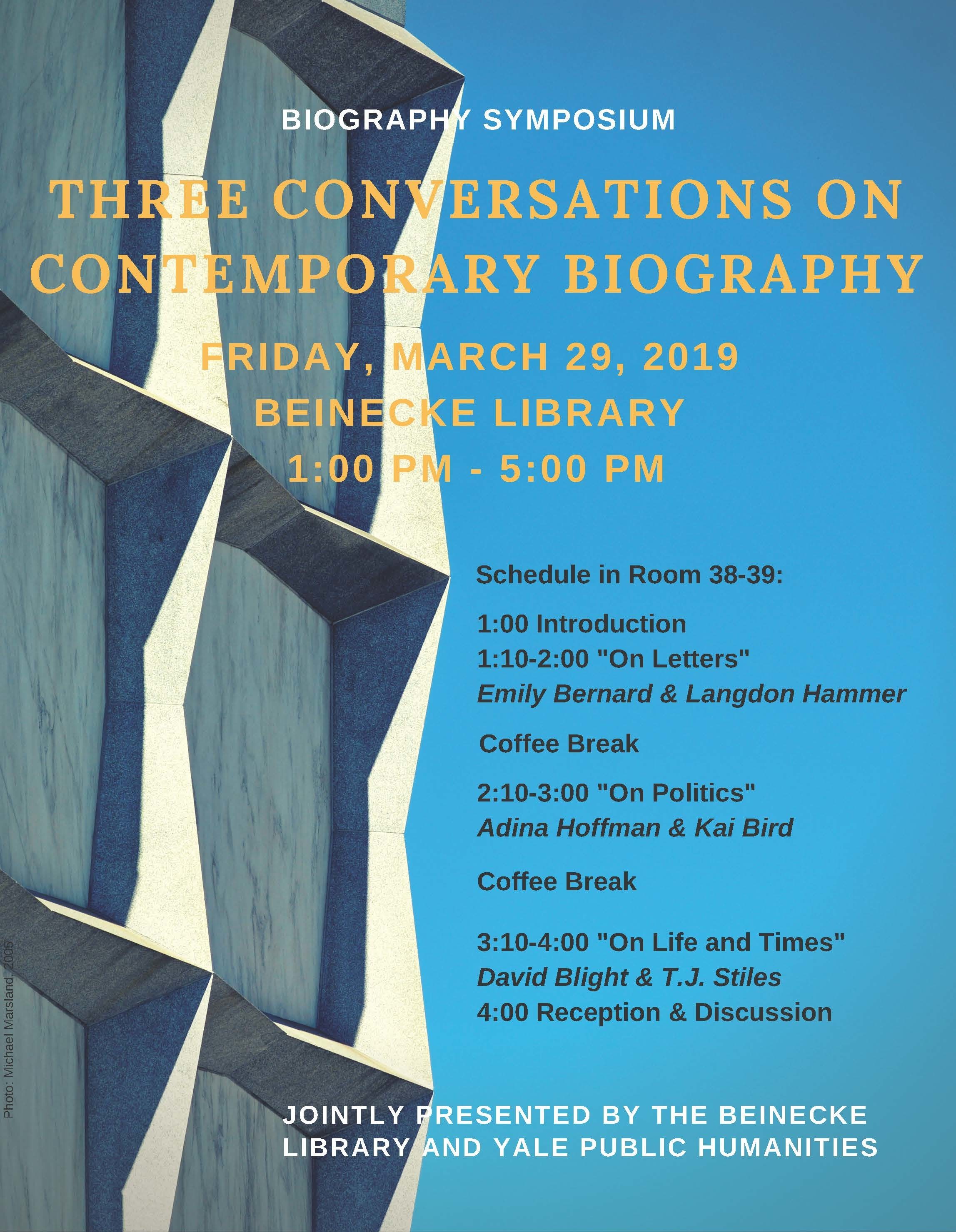