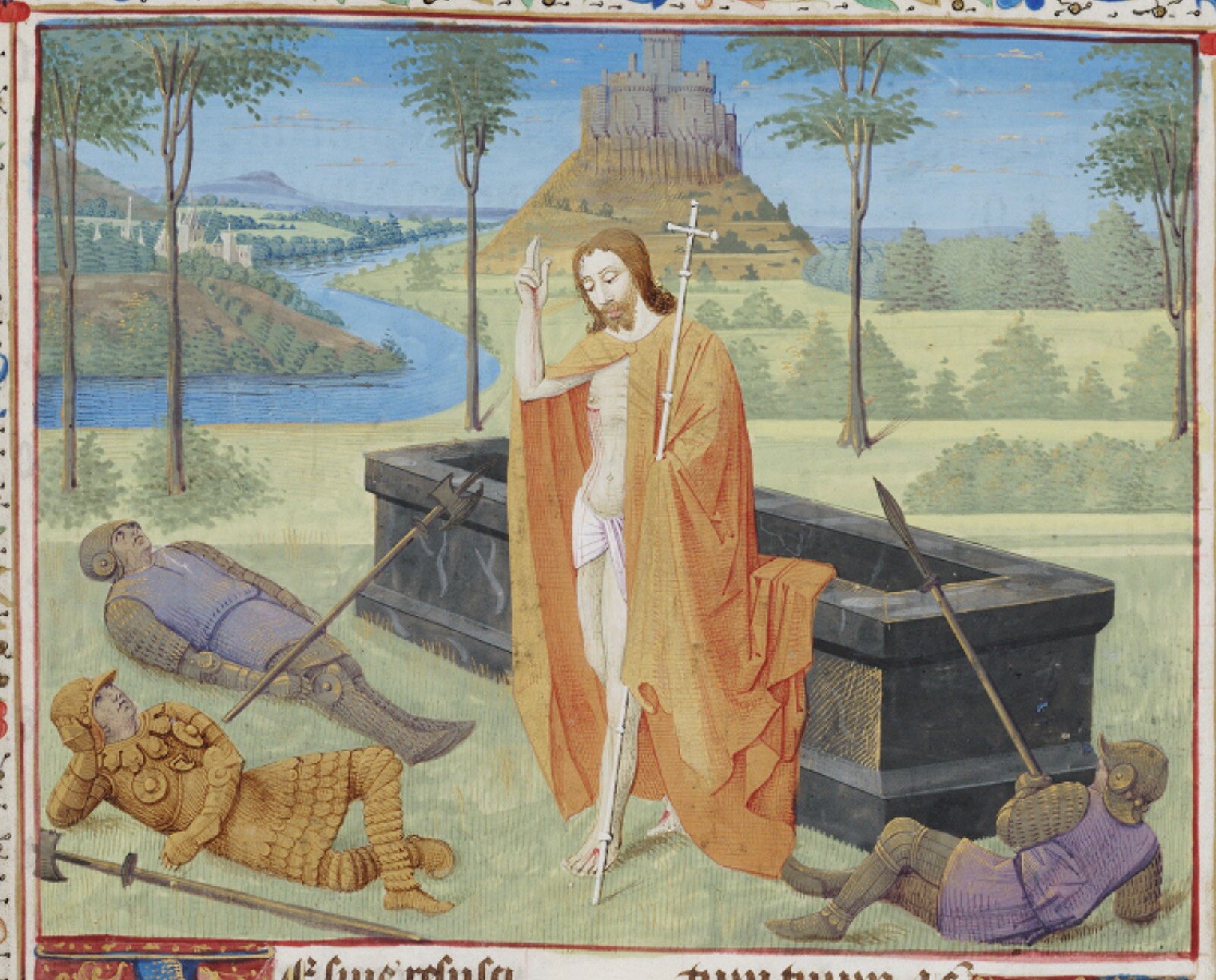 Easter is the most important movable feast in the Christian calendar.  A moveable feast (short for feast day) is a celebration that is not calculated according to the traditional solar calendar.  The date of Easter changes each year according to a complicated formula based on the lunar rather than the solar calendar.  Many litugical books have tables specifically desgined to determine the date of Easter each year, such as the one below from Newberry Library MS 82, f. 2r.  (For more information on Easter Tables, see Clemens & Graham, Introduction to Manuscript Studies, pp. 198-202) 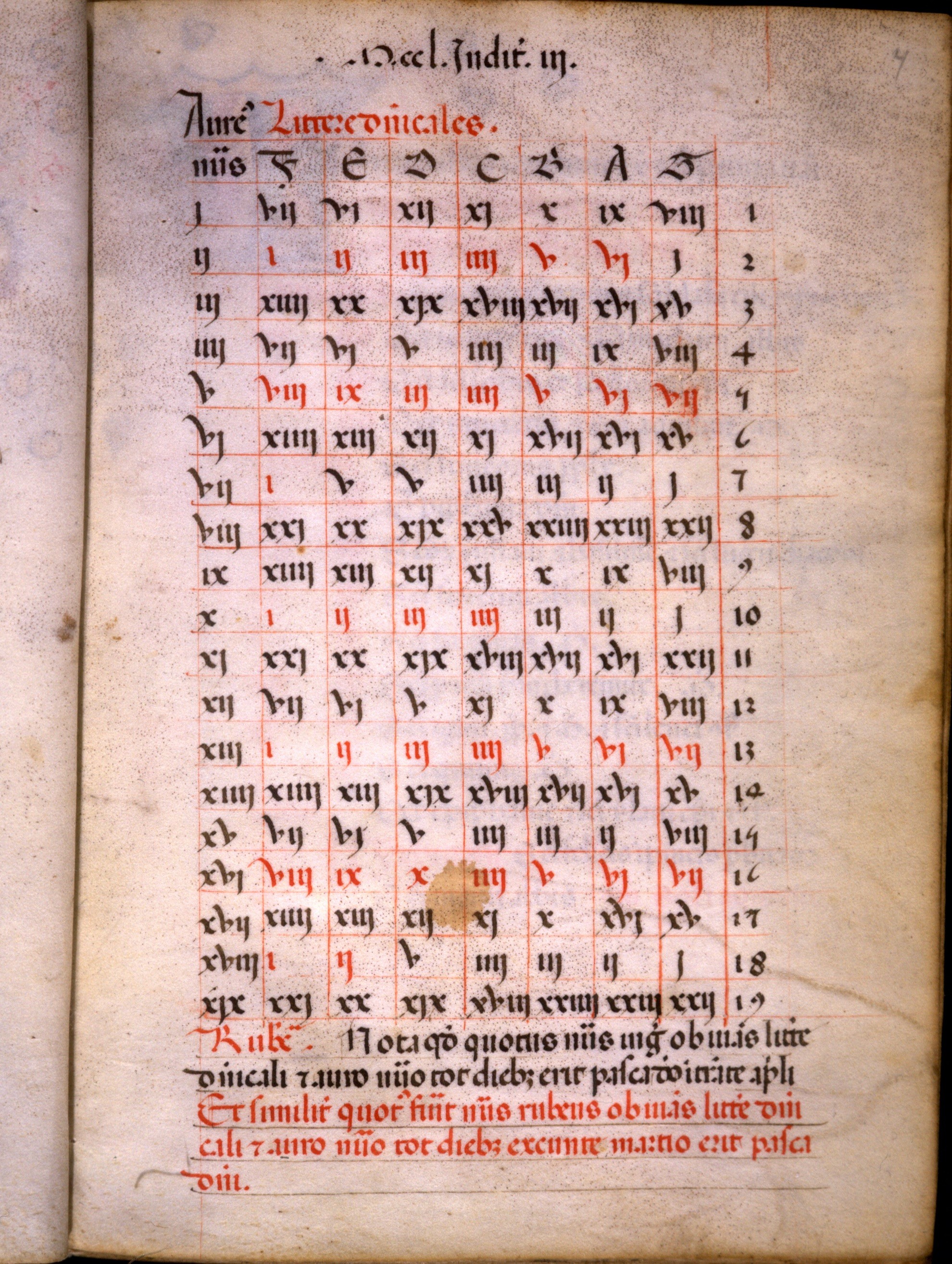 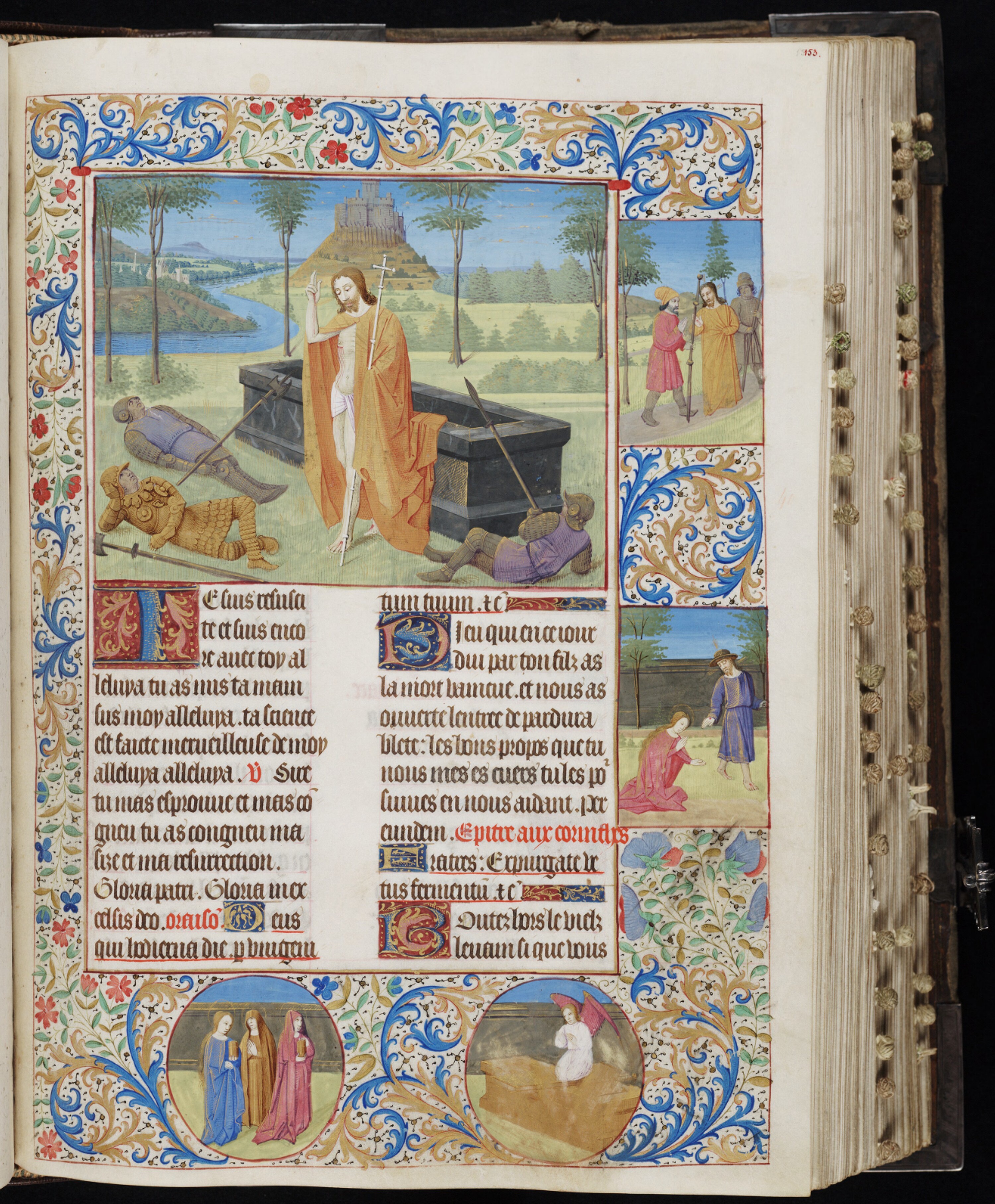 This image is taken from a single folio in a late fifteenth century French Missal, Beinecke MS 425, once called the “Fouquet Missal,” but no longer attributed to the artist Fouquet.  The Missal was a grand one composed for a wealthy family.  The text is entirely in French and is richly illuminated.  This scene shows the moment of Jesus’ resurrection, with the tomb thrown open and the guards so frightened that they “shook and became like dead men” [MT 27:4]

The events in the scenes from bottoms right to top left depict the events that immediately followed the resurrection.  In the first roundel (lower left), the three Marys carry enbalming spices to the tomb to annoint Jesus body but find the tomb empty (second roundel, bottom right) and an angel on top of the tomb explaining that Jesus had been resurrected, as he promised [MT 27:6].  The third scene shows Mary Magdalen, who in the gospel of John mistook the resurrected Jesus for the gardener, falls to her knees to embrace Jesus, but is told by him, “Noli me tangere! (Do not touch me!) [JN 20:17].  The four gosepls contain conflicting information about the details of the resurrection and the illumination reconciles those into a single narrative.  The last scent (upper right) shows Jesus demonstrating his wound to Thomas, the disciple who was not present when Jesus first appeared to the other apostles.

Although one of the most important aspects of the life of Jesus of Nazarath, images of the resurrection are less frequest than those of Jesus’ execution, likely because of the emphasis in late medieval piety on the role of the suffering body in the redemptive process.  Beinecke MS 425 includes several full page illuminations of the resurrection or empty tomb.  A full facsimile of Beinecke MS 425 is available on in our Digital Library.