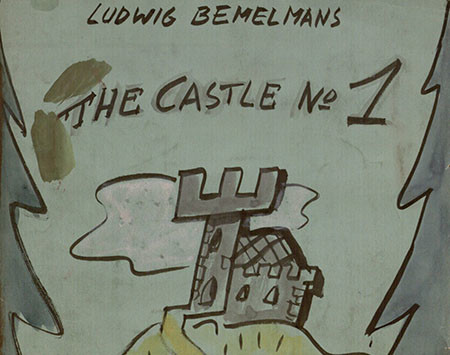 Mention the author and illustrator Ludwig Bemelmans, and most people think of his yellow-hatted heroine, Madeleine. Bemelmans won a Caldecott in 1954 for Madeleine’s Rescue, the third book in the series.

Perhaps less well known is a book he wrote only two years before Madeleine’s debut. The Castle Number Nine, published by Viking in 1937, is the story of how the good Baptiste becomes a servant of Count Hungerbury-Hungerbury and invents a new language. It is set in the Austrian Tyrol, where Bemelmans was born in 1898.

As is typical in children’s book publishing, Bemelmans used a visual mockup of rough sketches and blocks of typescript to guide the flow of text and illustration for the final published version.  Of interest to scholars of the material text are the many changes Bemelmans and his publisher made from the dummy stage to the final version, including, most obviously, the title.

The Beinecke Library holds a range of original artwork from many prominent children’s book artists – including R. André, Maxfield Parrish, E. H. Shepard and others – in the Betsy Beinecke Shirley Collection of American Children’s Literature. Betsy Shirley’s personal bequest of manuscripts, artwork and other ephemera is fully catalogued in the online guide to her collection: http://hdl.handle.net/10079/fa/beinecke.shirley and many original works of art are featured in Timothy Young’s Drawn to Enchant: Original Children’s Book Art in the Betsy Beinecke Shirley Collection (Yale Univ. 2007).