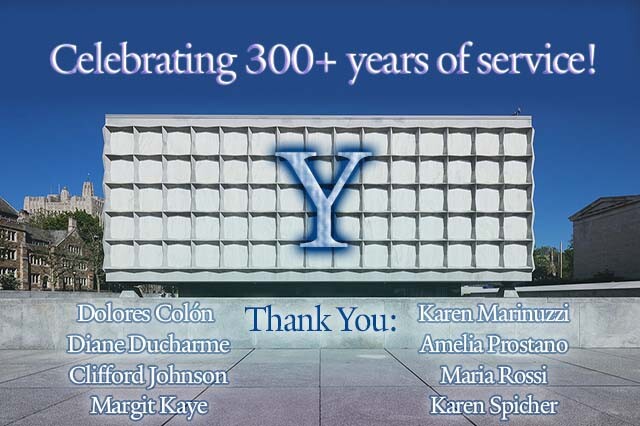 “Beinecke Library is an inspiration to all who enter, onsite or online, thanks to the outstanding work of staff across the library,” said Michelle Light, associate university librarian for special collections and director of the Beinecke Library. “They make our collections accessible for faculty, students, scholars, and the public.”

“As 2021 ends, we especially celebrate and enthusiastically thank eight retiring staff members – Dolores Colón, Diane Ducharme, Margit Kaye, Cliff Johnson, Karen Marinuzzi, Amelia Prostano, Maria Rossi, and Karen Spicher – who collectively have devoted more than 300 years of stellar service to Yale University. Their legacy is extraordinary and will be an ongoing source of inspiration for my colleagues and me.”

The outstanding Beinecke Library staff members retiring in December 2021 are:

Dolores Colón started working in Sterling Memorial Library 30 years ago and transferred to Beinecke Library a year later where, except for the time she spent working for the union, she spent her career. During her long tenure she worked in both Technical and Public Services, with work that involved all the variety of materials in the collections and patrons who use the library. She most enjoyed working with her colleagues and particularly with patrons.

Coworkers have appreciated her dedication, hard work, and sense of humor. Having also served as an Alder for the City of New Haven for a number of years, many also enjoyed her tales of New Haven life and politics. Dolores plans to spend her retirement continuing to give back to her community in various volunteer roles. Her personality and drive will be sorely missed.

Diane Ducharme began her archival career 40 years ago as a student assistant in Manuscripts and Archives in 1981, moving to a position in Beinecke in 1985. Diane has expertly processed and cataloged everything from modern literary collections to Medieval and Renaissance manuscripts. Diane was also a central contributor to the Beinecke’s project to retrospectively convert the printed long-form descriptions of all early manuscripts into the MARC format, enhancing access and visibility for these manuscripts.

Much of Diane’s work over the years focused on the James M. and Marie-Louise Osborn Collection and other materials from the early modern period. This included the Boswell Collection, which Diane processed and then highlighted as co-curator of the exhibit, “The Making of Boswell’s Life of Johnson”; it also included a wealth of individually acquired commonplace books, letters, documents, recipes and other evidence of life in this period. Diane developed strong expertise in cataloging single manuscripts at a time when professional descriptive standards did not fully address the requirements of this work. This experience informed her work as one of the authors of Descriptive Cataloging of Rare Materials: Manuscripts, or DCRM(MSS), an essential resource in the descriptive standards cannon, and her work as a co-creator and instructor of the RBMS workshop on the standard.

Over the past decade Diane also contributed to collection development for early modern material and co-taught Beinecke’s course in Latin paleography, as well as co-curating two exhibitions. Diane also led a popular series of workshops for staff entitled “Practical Paleography,” covering difficult English scripts and giving her colleagues greater confidence in their work with earlier materials. Diane mentored many Beinecke student employees, several of whom were thus inspired to become librarians and archivists—one more way in which she leaves an impressive legacy that extends well beyond Yale.

Cliff Johnson, who works in the Beinecke’s Digital Services Unit, is retiring after 34 years of service. Over the past decade, Cliff has been working tirelessly to ensure that whatever we digitize is findable and described accurately. Just recently, in fact, Cliff corrected the misidentification of the pianist accompanying Billie Holiday in a photograph from the James Weldon Johnson collection. A penciled transcription on the back of the photograph guessed that the musician was Jutta Hipp. With one look, however, Cliff knew that the transcription was in error, and he was able to determine that it was most likely Corky Hale playing the piano that night instead.

Cliff is the only person to log over 1 million interactions in Ladybird, the system that the library uses to track digital projects. The 1,038,048 interactions registered by Cliff in his day-to-day work just goes to prove how instrumental Cliff has been behind the scenes, working to improve Yale’s digital library for people across the globe.

Margit Kaye has helped students, faculty, and visiting scholars pursuing research in Yale’s magnificent cartographic resources to navigate the collections for more than a half century.

Margit began at Yale 56 years ago in 1965 on the serials team in Sterling Memorial Library (SML).  Two years later, she moved to the Map Collection where she quickly assumed principal responsibility for public service, working with a wide range of patrons, from inexperienced freshman to the world’s foremost experts in the history of cartography. Working for six curators, she has been a constant source of information about the globes, maps, charts, and atlases that make Yale’s cartographic collections among the most significant in the world.

In the difficult months after the discovery of Forbes Smiley’s thefts of maps from Yale and elsewhere, Margit played an essential role in documenting the damage Mr. Smiley caused. Her careful analysis allowed the University to identify and recover multiple maps that Smiley denied he had taken from Yale.

Recognized as “the Collection’s best champion,” when it was housed in SML, Margit continued that role when these historic resources were transferred to Beinecke Library in 2015. One of her final projects this fall was to complete an online guide to Yale’s rare maps and the reference works that describe them. No one will be surprised if that guide remains in use for nearly as long as Margit has served.

Karen Marinuzzi started working at the Beinecke Library 1978, has worked here for 43 years, and is currently the longest serving staff member in the history of Beinecke Library, a place where every day she had the opportunity to learn something new, see incredible acquisitions, and work with amazing, dedicated curators.

Some of the highlights of her time at Beinecke were examining the Gutenberg Bible, Galileo’s Istoria … with his autograph and manuscript notes, and Thomas More’s prayer book with his annotations made during his time in the Tower of London, as well as meeting many well-known people, and most of all shaking hands with and having a conversation with Joe DiMaggio as Bart Giamatti was giving him a tour of the ground floor of Beinecke.

Amelia Prostano started her career at Yale 38 years ago in the Acquisitions Department of SML in 1983, then transferred to the Beinecke Library in 1985. She is still astounded by the spectacular material she’s been fortunate enough to work with throughout nearly four decades at Beinecke — time enriched by continuous learning experiences such as readings, lectures, exhibitions, and conversations.

Highlights of her time include being a founding member and organizer of Local 34, Federation of University Employees, which has truly been a life-changing experience. She is so proud of what the union has accomplished, and the future impact of that work. Another highlight was working on the exhibit ‘Celebrating Italian Festivals’ with curator Bob Babcock in 2007.

Amelia enjoyed working with all Beinecke staff but will especially miss her extraordinary printed acquisitions colleagues/friends. Their support and sense of humor have made it a pleasure to come to work every day.

Maria Rossi began her Yale career 45 years ago in Beinecke gluing bookplates into books in 1976. As a result of on the job training and hard work, she advanced through the ranks to become an Acquisitions Assistant in Beinecke Technical Services.

In 1991 she left Beinecke in a lateral move to work as a curatorial assistant in the Yale Center for British Art, Department of Rare Books and Manuscripts. This move broadened her knowledge of special collections throughout Yale and beyond and she became a valued source of information for reference, exhibition research and pre order searching for all YCBA collections. She left the Center after 20 years of service to return to Beinecke Printed Acquisitions as an acquisitions assistant where she remained until retirement.

Due to a knee injury, Maria has had to say goodbye to her beloved sports of skydiving, spelunking and vert skateboarding. In retirement she will continue her interests in automata, flipbooks, drawing, and outsider art.

Karen Spicher joined the Beinecke Manuscript Unit (MSU) 25 years ago in 1996 as a project manuscript cataloger, moving to a permanent processing archivist position in 1999. Over her career at Yale, she has processed and cataloged material representing a wide range of times, places, and subject matter, from modern manuscript collections to eighteenth-century materials.

In particular, she has put to excellent use her expertise in music, rooted in her experience as a violinist and strengthened through her passion for description; her work on the Frederick R. Koch Collection, a large collection focused largely on music and musicians, is one prominent example of her skill in this area. Karen also drew on this expertise as a co-author of Descriptive Cataloging of Rare Materials (Music) and the recently published Archival Description of Notated Music.

Karen has long been a leader in manuscript cataloging at Yale and beyond. She developed and documented manuscript cataloging procedures; she also founded the Manuscript Cataloging Committee (MCC) in 2003 and served as chair for more than a decade. To succeed MCC, Karen proposed and initiated the Archival and Manuscript Description Committee (AMDECO), and was a founding member of the AMDECO-sponsored Reparative Archival Description Committee (RAD). To all this work she has brought detailed focus and a strong user-centered perspective that has sustained and continuously improved access to special collections materials in all their complexity. She has also carefully mentored her colleagues, passing on her knowledge and expertise to a new generation of archivists in Yale special collections.