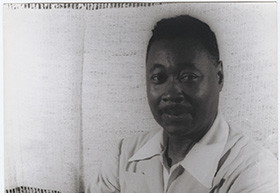 Claude McKay (1890-1948), one of the major figures of the Harlem Renaissance, wrote several collections of poetry, novels, short stories, non-fiction, and autobiographical books. He lived in the United States, primarily in New York, from 1913-1919, and then spent most of the next 15 years in England, Russia, France, Spain, and Morocco before returning to New York in 1934.

The McKay Collection consists of letters, manuscripts, personal papers, subject files, photographs, and memorabilia. The collection features MacKay’s correspondence with many writers and figures in the African-American community from the first half of the 20th century, including Langston Hughes, Countee Cullen, James Weldon Johnson, Carl Van Vechten, Harold Jackman and Arna Bontemps. There are drafts of published and unpublished poetry collections, novels, autobiographical writings, and short story and essay compilations, including The Selected Poems of Claude McKay (1953), Harlem: Negro Metropolis (1940), “Romance in Marseille” (an unpublished novel written in Spain in 1930), and My Green Hills of Jamaica (1979), McKay’s autobiography of his youth. McKay contributed to liberal and socialist journals, such as Sylvia Pankhurst’s Worker’s Dreadnaught and Max Eastman’s The Liberator.

The collection includes various pieces of non-fiction, most in draft form, as well as a few polemical newspaper articles, dating from the 1930s, in which McKay responds to critics of his literary work and views on labor. McKay was well received in Soviet Russia in the early 1920s, and there are photographs of Lenin, Trotsky, and other high ranking party officials, and of McKay addressing the Fourth Congress of the Communist International in the Throne Room at the Kremlin in Moscow.