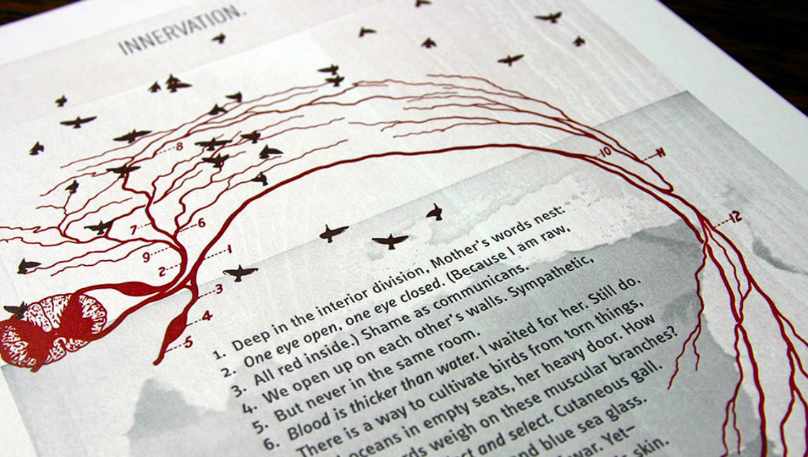 The dynamic and diverse world of contemporary Asian American poetry is well represented in the Yale Collection of American Literature as the highlights below will attest.

Additional materials in many formats can also be found in the collection using the library’s various collection research tools: books, magazines, broadsides, and other ephemeral publications can be located in Orbis, Yale Library’s catalog for printed materials (limit your search to Beinecke collections using the Advanced Search feature); literary archives, personal papers, manuscripts, correspondence, photographs and other documents can be identified by searching Archives at Yale; some of these resources can be viewed in the Beinecke’s Digital Library (see, for instance: gay and lesbian writers and literary figures photographed by Robert Giard).

Extraordinary materials in the Beinecke Library are linked below. For more information and resources about Asian American poetry and poems by the following writers and many others visit: Asian American Writers Workshop; Kundiman ; and Asian American Voices at the Poetry Foundation.

Mei-Mei Berssenbrugge is a well-known contemporary poet, associated with both the New York School of poets and the Language poets. Her poetry is notable for its long-lined style and shifting range: it mixes the formal and the familiar, the scientific and the humanistic. The Beinecke has a large collection of Berssenbrugge’s papers including writings, correspondence, photographs, and teaching materials. Berssenbrugge’s correspondence also includes letters from a multitude of other contemporary poets including Asian American poets such as Jessica Hagedorn, Garrett Hongo, Myung Mi Kim, Maxine Hong Kingston, and Alan Chong Lau.

As well as an award-winning poet, Marilyn Chin is an anthologist, translator, educator, and novelist. Her work is known for its direct style, embracing and exploring Chin’s identity as both an Asian American and a feminist. The Beinecke’s collections include an early submitted copy of Chin’s book The Phoenix Gone, The Terrace Empty to BOA Editions publishing house, and Chin’s typescript translations of 32 poems by Ai Qing. Both are noteworthy examples of Chin’s writing and publication process.

Lauded for the epic scope and lyricism of his poetry, Li-Young Lee has published numerous collections. His work is influenced by his experiences of flight from Indonesia, the country of his birth, and of his parents’ Chinese heritage. His work can be found in a few different places in the Beinecke’s collections, most notably in correspondence and manuscripts sent to BOA Editions publishing house. These archives offer another insight into the world of poetry publication. In some of his letters Lee writes about his ambitions as a poet, and his questions about poetry in the modern world.

Timothy Liu is the author of several award-winning books of poetry, and the editor of Word of Mouth: An Anthology of Gay American Poetry. His poems stretch the boundaries of language, playing with form and linguistic tropes. The Beinecke’s BOA Editions papers contain an unpublished manuscript of Liu’s, entitled With Chaos In Each Kiss. The Beinecke also has Word of Mouth, and Liu’s correspondence with several writers including Brian Evenson, Stephen Sandy, and Douglas Crase.

With Chaos In Each Kiss Call Number: YCAL MSS 635, accession 3

Hoa Nguyen is a poet, teacher, and co-editor of the small press and journal Skanky Possum. Her poetry is notable for its shifting between phrases, and the space between these points of language. The Beinecke has several pieces of Nguyen’s hand-written correspondence. This includes letters from Nguyen to Larry Fagin, in which she writes about Texas and America. It also includes a wealth of correspondence with Kevin Killian and Dodie Bellamy, including letters that discuss Nguyen’s life and poetry.

Monica Ong works at the intersection of poetry and visual art. Her poetry bursts out of the confines of the page, using images and objects to explore the history of Chinese medicine and bodies in diaspora. The Beinecke has recently acquired several poem-objects by Ong including x-ray lightbox poems, letterpress broadsides, and a series called “The Onset” of poems on medicine bottles. These recent acquisitions will become available for research in the coming months. Ong’s first book of poetry, Silent Anatomies, is already available at the Beinecke and in other Yale collections.

Prageeta Sharma’s poetry is—as she puts it—a portrait of cognition. Where other tell a story, she paints a mind. The winner of numerous awards and author of several collections, Sharma teaches at Pomona College where she also heads a conference on race, creative writing, and literary studies. The Beinecke has several files of Sharma’s poetry, mostly relating to the publication process. One interesting resource is an early version of Sharma’s book The Opening Question in the papers of poet Peter Gizzi. These poetic drafts often have Gizzi’s comments, an example of dialogue between contemporary poets.

Arthur Sze’s poetry is celebrated for many reasons: its images, its lyricism, its attention to the mind and perception. His poems are meticulous and wide-ranging—drawing from the traditions of both American and Chinese poetry. The Beinecke has recently acquired Sze’s papers, documenting his poetry and life since his first major publication in 1972. This exciting new acquisition will become available for research in the coming months. It includes his work notebooks, writing materials, translations, and extensive correspondence with other poets in the YCAL collection. A great deal of Sze’s correspondence is already available in the papers of other poets. He has a particularly rich correspondence with Mei Mei Berssenbrugge, including exchanges of drafts.

Over the course of his career as a poet, editor, and teacher, John Yau has published poetry, fiction, and art criticism. Yau is the son of Chinese emigrants, and his work plays with boundaries. He explores the space between genres, languages, legacies, and cultures. He is known for his playful attention to linguistic detail. The Beinecke houses many documents relating to Yau including journal submissions, and a wealth of correspondence with other poets including John Ashbery,  Mei Mei Berssenbrugge, Douglas Crase, Rachel Blau DuPlessis, Barbara Guest, and Paul Violi.

The Asian American Literary Review is a biannual literary magazine. It publishes poetry, prose, and other literary art by writers who—as said in its website—“consider the designation ‘Asian American’ a fruitful starting point for artistic vision and community.” Its issues are often of a creative nature. The most recent issue, for example, was released as a box labeled “Open In Emergency” and consists of a poster, a deck of tarot cards, ten letters, and a pamphlet, among other things. The issues of this magazine are available for research at the Beinecke.

Above: an image of a print from Monica Ong’s “Silent Anatomies” artwork, taken from her webpage: http://www.monicaong.com/gallery

Beinecke Top Tens gather (approximately) ten related items to give an at-a-glance look at some of the Library’s interesting, important, strange, compelling, beautiful holdings. They are meant not as a comprehensive resource, but as an invitation to seek onwards. To suggest a list subject, contact us: Top Ten Ideas.