“A Corpse View’d after 84 yrs. Burial” and Other Miscellanies 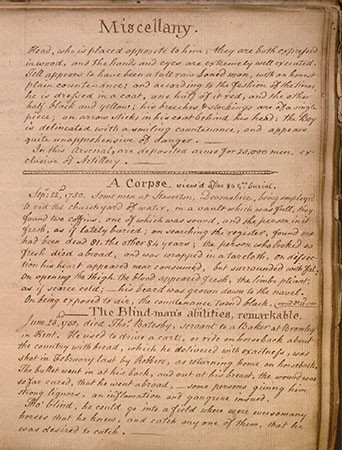 Commonplace books are often a delightfully rich source of the wit and wisdom of centuries gone by. The commonplace book compiled by James Moore of East Dereham in Norfolk is no exception.

In addition to poems, epigrams, and snatches from Shakespeare, Moore recorded tales and incidents that doubtless caused him wonder. Such as “A Corpse. view’d aftrer 84 yrs. burial,” in which Moore records a pithy description of how on Sept. 22nd 1750:

“Some men at Stowerton, Devonshire, being employed to rid the churchyard of water, in a vault which was full, they found two coffins, one of which was sound, and the person in it fresh, as if lately buried; on searching the register, found one had been dead 81, the other 84 years; the person who looked so fresh died abroad, and was wrapped in a tarcloth, on dissection his heart appeared near consumed, but surrounded with fat; on opening the thigh the blood appeared fresh, the limbs pliant, as if scarce cold; – his beard was grown down to the navel. On being exposed to air, the countenance turn’d black.”

The volume has a surprisingly detailed plan for provenance inscribed on the verso of the front flyleaf, suggesting how dearly the compiler valued it:

Whether Anna Moore ever received the book is unclear. The manuscript, along with three other commonplace books, was purchased for the James Marshall and Marie-Louise Osborn collection at an unnamed sale sometime between 1959 and 1963, and they were stored in one of Osborn’s famous liquor cartons. Osborn transferred ownership of his impressive collection of English books and manuscripts to Yale in a series of gifts beginning in the late 1950s, when the collection grew too large to be contained in his home.