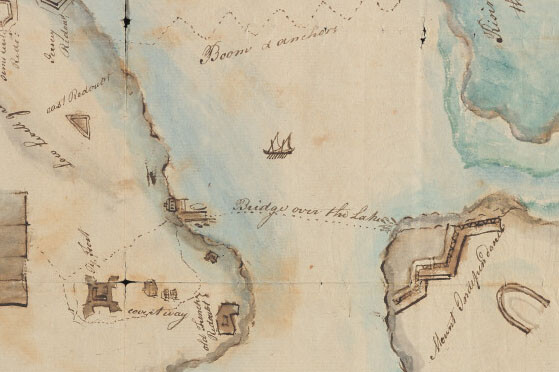 This holiday season saw the addition of many new items to our Digital Library, including several works created for children. Among these are a John R. Neill illustration for the eighth book in L. Frank Baum’s Oz series, Nordic characters and scenes sketched by Ingri and Edgar Parin D’Aulaire, and images of the Beautiful Saralee Dolls created by Sara Lee Creech. These items supplement the Beinecke’s collection areas in children’s entertainment and education.

Some recent additions exemplify facets of life either extraordinary or mundane. This watercolor map was used to plot military strategy during the American Revolutionary War, while this diary contains an observer recording the comings and goings of the mail via packet boat. Other additions seem to be simultaneously singular and everyday—like this deck of 19th century Tarock cards that uses the occasion of an ordinary card game to impart key battles and dates from The Napoleonic Wars to its holder. Or, take this 17th century omnibus of dirty jokes which arranged sacred subjects to speak in sexual and scatological registers, revealing no firm division between the sacred and profane.

Library users continue to consult Beinecke holdings to make sense of their political realities. A newly digitized poem by survivor A. J. Smitherman combines group portrait photography, lyric, and eulogy to document the devastation white mobs brought to Greenwood in the Tulsa race massacre after Black men prevented a lynching. A two-volume set of lithographic prints and text contains the racist perspective of Richard Bridgens, a plantation owner and proponent of slavery, and prompts one to examine how primary sources can aid white supremacy. Ten issues of Black Mask speak to a variety of political projects in late-1960s New York including a direct action against the Museum of Modern Art, advertisements for Black Panther Party members running for election in Alabama, photographs of anti-war protests, and accounts of the police brutality which ended these protests. These newly digitized works show instances of colonial and extrajudicial violence as well as resistance to subjugation.