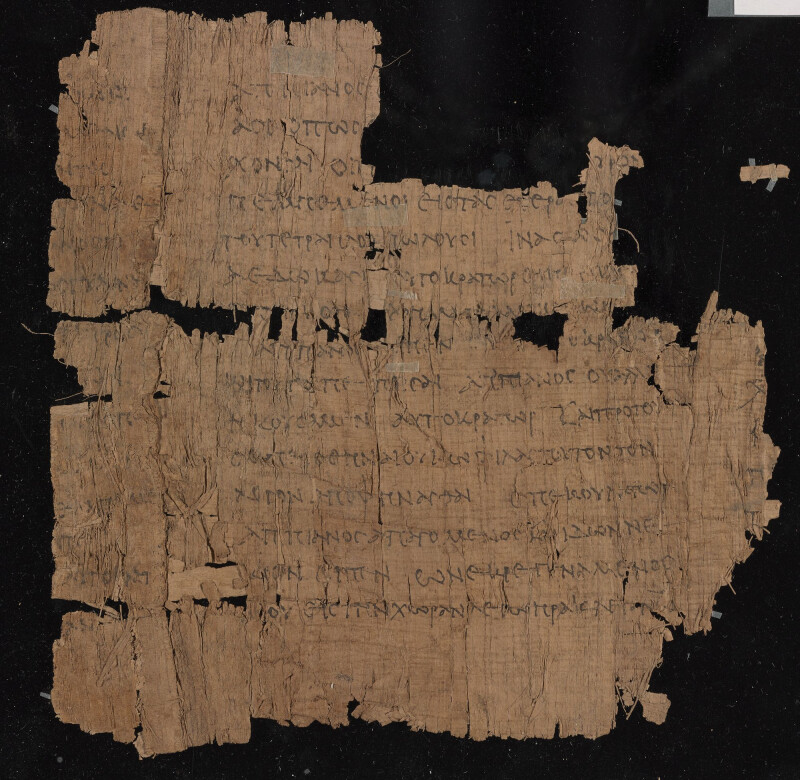 In 1936, Yale classicist Charles Bradford Welles published an article treating a “dirty and ragged scrap” of papyrus that Yale had acquired from an Egyptian dealer in Paris a few years prior. It had turned out that the unassuming scrap (P. Yale Inv. 1536) contained a fragment of the Acta Appiani, a text in Greek thitherto known only from a sister fragment owned by the British Library. The latter, known by the shelfmark Papyrus 2435, had been unearthed in 1897 at the site of the ancient Greco-Egyptian city of Oxyrhyncus (modern Al-Bahnasa). It just so happens that the text of the Yale fragment immediately precedes that of the British Library fragment so that they form a continuous, if incomplete, narrative. How the Yale fragment came to be in the possession of a dealer in Paris three decades later is anyone’s guess, but it is fortuitous that a second portion of the text survived.

The Acts of Appian constitutes one of a series of accounts about citizens of Alexandria who were martyred when confronting the Roman emperors on behalf of their native city, often over disputes with the local Jewish populace. This set of texts is known variously as the Acta Alexandrinorum or the Acts of the Heathen (or Pagan) Martyrs; they date to first few centuries of the Common Era. The texts adopt the narrative format of legal trials in which representatives of the city of Alexandria defiantly assert their rights and are summarily punished with torture and even execution for their presumption. Despite their non-Christian nature, the Acts closely resemble Christian hagiography of the era which also frequently assumed the form of judicial proceedings concluding with the martyrdom of the saint.

In the Acts of Appian, dated to the early third century, an Alexandrine representative named Appian verbally spars with the Roman emperor, evidently Commodus (161–192 CE), the infamous son of Marcus Aurelius. The text of the Yale fragment begins in medias res with Appian accusing Commodus of profiteering from the export of unspecified Egyptian goods (Welles suggests papyrus, the principal writing substrate of the day). The emperor then calls for an executioner (σπεκουλάτωρ / speculator) to lead Appian away. On his way out, Appian begins to address a corpse but gaps in the papyrus render most of what he says illegible. When the text picks up, now on the British Library fragment, Appian converses with one Heliodorus, possibly the son of the erstwhile Roman general and ill-fated usurper Gaius Avidius Cassius and grandson of the royal Julia Cassia Alexandra and Gaius Avidius Heliodorus, prefect of Egypt under Hadrian and Antoninus Pius. According to Welles, this historical Heliodorus may have been included in the narrative because of his family’s ties to Alexandria and their persecution under Commodus. Heliodorus tells Appian to accept his fate and do his city proud, he himself to follow shortly.

After this first threat of death, the emperor recalls Appian in an attempt to elicit a reconciliation. Appian proceeds to call him a tyrant and unfit to rule as his father did because of his “tyranny, love of evil, ignorance.” Unsurprisingly, the emperor again orders for him to be taken away but grants him the right to wear his ornaments of rank, including a fillet (a type of headband) and white shoes. Appian uses the privilege to his advantage by stirring up the crowd and calling attention to the perceived injustices committed against one of his station. As a result of the hubbub, the emperor again calls Appian back. The Alexandrine ambassador dryly inquires as to who recalled him from his meeting with Hades and certain martyrs whose story came earlier in the collection. He also impugns the emperor’s character again, calling him “brigand chief” in Welles’ translation. After sparring over their relative nobility and the emperor’s supposed greed, Appian launches into a history lesson of Egypt from the time of Cleopatra and Julius Caesar, at which point the fragmentary text ends. Although the remainder of the account is lost to time, barring further discoveries, the defiant envoy almost certainly meets his doom at the behest of the Roman emperor like the former martyrs that he invokes.

The Acts of Appian are fascinating for many reasons, not least because they give us a glimpse into the misgivings harbored by the Greek populace of Roman Egypt towards their overlords in the early 3rd century CE. The survival of multiple fragments also gives us a better sense of the dating of this copy of text because they were copied on pieces of papyrus recycled from different registry office rolls. The text of the registry office rolls was written on the recto (front) side of the papyrus; these rolls were then flipped over and the text of the Acts of Appian was copied on the verso (back) side when they were no longer needed for their original purpose. While the British Library fragment contains abstracts of contracts and transactions such as the sale of slaves and property divisions, the Yale fragment features a register of confiscated lands that appropriately dates to the time of Commodus, apparently making reference to the 25th year of his reign. One wonders whether the scribe of the Acts selected this particular document as the substrate for Appian’s story in order to heighten the reader’s impression of its historicity, should the reader bother to investigate what was inscribed on the reverse.

Even though the two sections of the papyrus roll have been separated for well over a century and perhaps much longer, curatorial teams at the Beinecke Library and the British Library have collaborated to reunite the two fragments digitally, making high-resolution images of both available online. Links to each can be found below; we encourage you to explore them for yourselves. Thanks to initiatives to virtually rejoin scattered fragments of textual and material culture such as these, who knows what future discoveries lie in store?