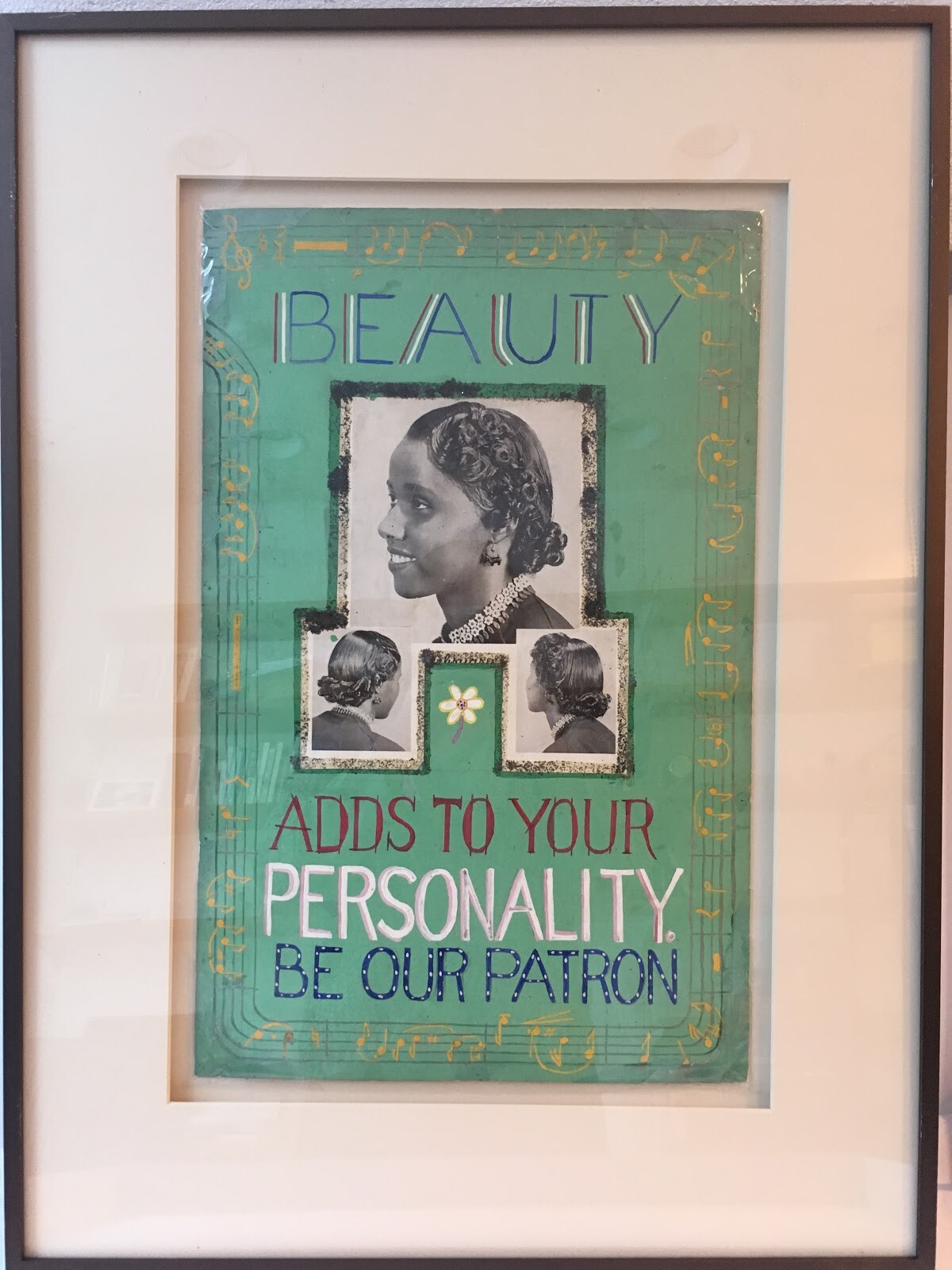 For more details about the context of these placards, see below the transcription of the 1939 newspaper article, “Harlem Fair Group Stages Fashion Show,” which is pasted on the poster in Box 3 of the collection.

Green poster with grey musical staff border with yellow notes. “BEAUTY ADDS TO YOUR PERSONALITY. BE OUR PATRON” in red, white, and blue ornamented lettering. A flower is painted in the middle of the poster next to three photos of a woman, one of her profile and two of the different sides of her hairstyle. The photos have glittery borders.

Dark purple poster with white and lavender border. Written in pencil on the back of the poster are the words: “Marcel Roll” “College Girl Curls” “Up sweep” and “Ev’n Tide”. They are written in the four corners of the poster, matching the corresponding pictures on the front. “Novel arrangements, making hair styling interesting and dramatic for the coming fall season. All photos on this page posed especially for the Apex News and copyrighted. Reproduction, whole or in part, strictly forbidden without written permission from Apex News” typed on a piece of paper and taped to the back of the poster, and “And be convinced” written in pencil underneath. Five photos of women with labeled hairstyles. “CURLEY TOP MAKES THE OLD LOOK YOUNG AND THE YOUNG LOOK YOUNGER” written at the top of the poster.

Tan poster with black glitter border. “HAIR STYLING” written at the top, “GLAMOROUS” and “BEAUTY” written down the sides next to a photo of a woman and a second photo of the back of her hair. “By EXPERTS At MODERATE Cost” written at the bottom. Ornaments include colored lines and a flower. Decorative handwriting.

Cream colored card-shaped poster of the Queen of Diamonds. “STYLED FOR A QUEEN WITH YOU IN MIND” written in big letters, and inside a painted banner is written: “CURLEY TOP Makes the old look young and the young look younger”. The text is red, green, yellow, and purple. In the center of the poster are two photos of a woman, highlighting different angles of her hairstyle.

Cream colored poster in the shape of an ace of diamonds. “TRUMPS! AND WIN LIFE’S GAME THRU’ THIS STYLE OF ROMANTIC CHARM”. A photo of a woman alongside a photo of the back of her hairstyle, pinned with flowers. Below the picture is written “NEW LINES”. The poster is cut in the shape of a card with rounded corners. Some smudging of the text.

1939 dark purple poster with thin white border and thicker lavender border. “‘THE WAY TO A MAN’S HEART IS THROUGH HIS STOMACH’ IS NOT TRUE! ‘LOOKS’! NOT COOKS WINS ROMANCE!” Photos of two women and their hairstyles. “Be our patron” is penciled lightly on the back of the poster. The photos are bordered in red and white and the calligraphy is detailed and decorated. Some of the words are written on painted banners.

Light pink poster with half white border. “DEEP RIVER AS STYLED & STAGED BY US AT THE FAIR!” written at the top. Pasted next to a photo of the back of a woman’s hairstyle is a clipping of a 1939 newspaper article from The Chicago Defender entitled “Harlem Fair Group Stages Fashion Show.” “READ OF OUR Success! IN ABOVE CLIPPING” is written beneath the article. Click here* to read the full text of the article.

Pink Poster with purple border on two sides. “HAIR COLORING” written at the top with “COLORING” in rainbow letters. “WE DYE - WHILE OTHERS TRY” is written beneath the heading. In green boxes are the words: “YOUTH APPEARS AGE DISAPPEAR,” “TINTS AND BLEACHES CHANGES YOUR FEATURES,” and “HAIR DYED TO PERFECTION TO SUIT EVERY COMPLEXION”. Three rectangles with two rows in each rectangle hold real hair samples. The first rectangle is labeled twice with “Progressive” and contains ten shades of hair, all labeled with a descriptive title (such as “Light Amber Blonde”) and a corresponding Number. The other two rectangles are labeled “INSTANT” and each contain eleven hair samples. Every hair sample is attached to the board with a circular metal pin.

Tan poster with brown glitter border. Written in different colors and with ornamented letters: “IF IT IS / STYLES / WE HAVE MANY / FOR YOU”. Three overlapping triangles are placed between four glitter-bordered photos of women’s hairstyles.

Cream colored poster shaped like a Queen of Hearts card. “TRULY THE STYLE” written at the top and “FOR A ‘QUEEN’ LIKE YOU” written beneath a photo of a woman’s profile and hairstyle. Her photo is outlined in red, yellow, and green.

Green poster with darker green border. Six photos of women’s hairstyles, including two photos which only show the back of their hair. The photos are bordered and connected to one another by maroon lines. Glitter appears in splotches or on the corners of these borders. “A WOMAN’S WEALTH IS HER CONSTANT BEAUTY” written in different styles down the middle of the poster and “STYLE,” “BEAUTY,” “GLOSSY,” AND “CHARM” written on the sides of the poster. Flowers drawn at the bottom.

Pink poster with a green, white, and blue border. A piece of the bottom right corner is missing. Large photo, bordered with glitter, of a seated woman with the words “YOU TOO CAN HAVE CHARM AND BEAUTY LIKE THE ‘QUEEN OF EGYPT’ LET US BRING OUT YOUR HIDEN BEAUTY.” Written with different colors and styles. A moon and star and a circle with the number 7 are both small icons in the top right corner.

Full text of the newspaper article pasted on the poster in Box 3:

“500 Pack Auditorium For Unit’s First Affair of Kind / New York, July 14—The Negro Industrial Fair, which had its grand opening June 24, presented its first fashion revue last Thursday under the guiding hand of Miss Rheba Smith. An appreciative audience of 500 persons filled the auditorium. Continuous applause greeted the appearance of each model. In the first group were the creations of Miss Evelyn Gray. Miss Gray and Miss Marguerite Roberts were the models. / The second group, which was sponsored by Miss Clara Miles, presented a number of new hair styles created by Miss Miles. The models, all of whom were exquisitely gowned, wore dresses created by Harlem designers and dressmakers. / The models and their creations, in the order of their appearance, were: Miss Alberta Winter, representing ‘Romance;’ Miss Cleatha Coleman, ‘Swing;’ Irma Johnson, ‘Baby Curls;’ Grace McHillard, ‘World’s Fair—Style of Tomorrow;’ Miss Clara Reynolds; ‘Deep River;’ and Miss Leeman Powell, ‘The Vamp.’ / As soon as out-of-town visitors begin to appear in larger numbers, it is the intention of the management to present regular fashion shows every day, in order that local dressmakers, hairdressers, and designers can show their wares to the best possible advantage. / Special programs are being arranged for Thursdays and Saturdays in addition to the fashion shows, it was announced, beginning Thursday, July 13, which will be ‘Free Merchandise Day.’ / Saturday, July 15, will be ‘Youth Day.’ High school and college graduates for the preceding year will be the guests of honor. The subject for the day will be ‘Negro Youth Looks Ahead.’ Prominent citizens have been invited to address the graduates and interpret the fair. Program will start at 5 p.m. Thursday, July 20, a play, ‘The Ten Virgins,’ written and directed by Rev. John W. Robinson, pastor of the Christ Community church, will be presented at 8:30 p.m.”