“E for Executioner”: The ABCs of William Nicholson 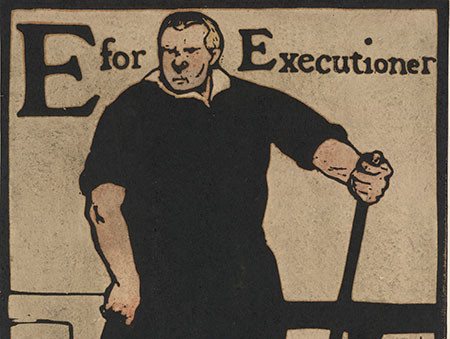 ABC books are designed to teach children their letters, paving the way toward reading. They developed from horn books of the fifteenth century and rely upon a simple formula of matching each letter of the alphabet to an easily recognizable – or unforgettable – figure.

William Nicholson’s 1898 An Alphabet is a beautiful example of the genre. Part primer, part cautionary tale, Nicholson injects a strain of menace into the illustrations that helps to drive the abecedarian lessons straight home.

What child would be likely to forget the butcherly stance of the executioner in “E for Executioner,” or the red-handed shame of the robber, pilloried, in “R Is for Robber”? V could only stand for Villain in Nicholson’s alphabetic imaginings, and the dark visage of the figure who looms over the letter is an unmistakable sign of trouble.

Not all of Nicholson’s letters are so grim, however. “F is for Flower Girl,” for example, shows a rosy-cheeked girl proffering a basket of pink posies. The Huntsman who adorns the letter H is a dashing figure, as handsome as the L for Lady.

Nicholson was an English painter and engraver, as well as an illustrator and author of children’s books. He was born in Newark-on-Trent in 1872 and briefly attended Hubert von Herkomer’s art school at Bushey and, later, the Académie Julien in Paris.

After designing a successful poster series, the painter James McNeill Whistler in 1896 recommended Nicholson to the publisher William Heinemann, who commissioned An Alphabet and first published it in London in 1898. The Beinecke holds an edition-de-luxe, printed in New York by R. H. Russell from the original woodblocks. Each print is hand colored and signed by Nicholson.