An Early Edition of Don Quixote 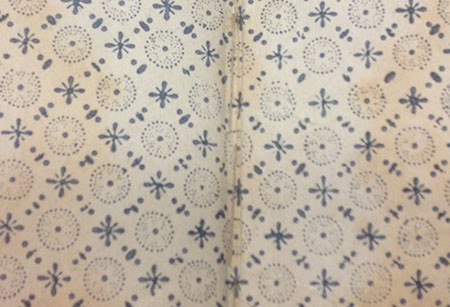 That ingenious gentleman from La Mancha, familiarly known to readers as Don Quixote, was introduced to the world by Miguel de Cervantes y Saavedra in 1605. Francisco de Robles purchased the rights to publish the book, and Part I appeared for the first time in print in Madrid early that year.

Immediate success followed, and the book has been pirated, reprinted, and republished countless times and in countless places from the seventeenth century to today.

This early edition from the Beinecke’s collections, printed in Brussels in 1611, features lovely printed endpapers patterned in the style of the dominotiers of France, a guild whose work included wood engraving and paper design. The dominotiers, well known for their decorative paper wall hangings, got their name from the dominos, or the black, hooded cloaks worn by their members.

The imagiers, members of the dominotiers, were so called because they used woodblock techniques to print portraits and scenes from the Bible. As their craft developed, they began printing flowered designs and other patterns with names and descriptive legends that ran along the paper margins. The papers were tremendously popular and were used for all sorts of household decoration.  Hence the name images populaires  for papers patterned in a style similar to those of Don Quixote’s.

But the imagiers’ innovations led to a dispute in the seventeenth century with the guild of printers and booksellers.  The printers’ guild claimed that the dominotiers infringed on their exclusive rights to use type. Rather than risk having their equipment confiscated, the dominotiers largely gave up the practice of including legends on their papers.

The paper decorators who followed kept in mind the popular and stylish designs produced by the dominotiers, and many found their way into the endpapers of books, particularly in the eighteenth century.

The volume of Don Quixote appears to have been rebound in the eighteenth century, and the endpapers were likely to have been produced and inserted at the time of its rebinding.