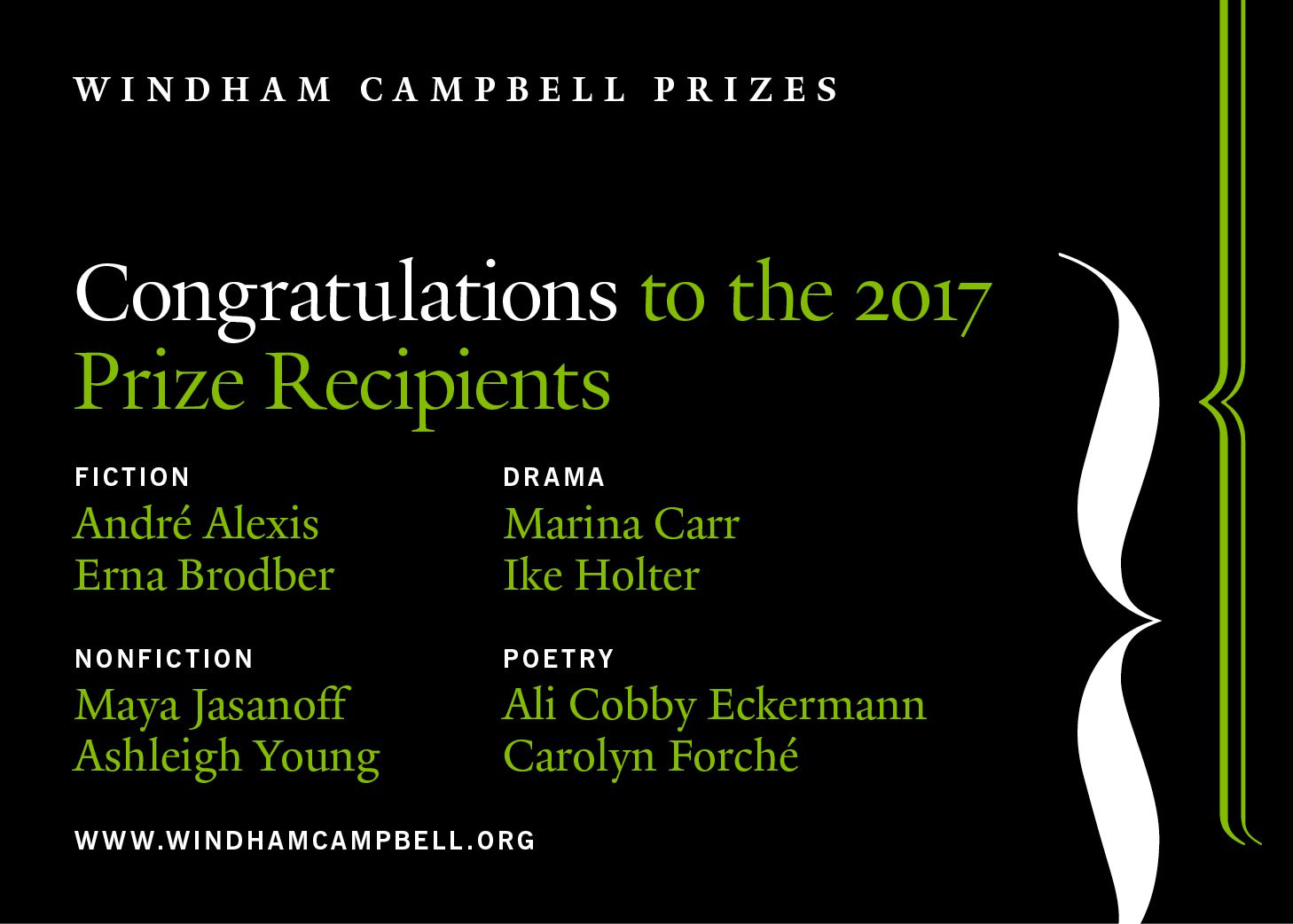 The director of the Windham-Campbell Prizes at Yale University made the call of a lifetime to eight unsuspecting writers this week, and informed them that they will be recognized with a $165,000 individual prize to support their writing. This year’s recipients of one of the world’s richest literature prizes for the first time include poets, alongside writers of fiction, nonfiction, and drama. The awards will be conferred in September at an international literary festival at Yale, celebrating the honored writers and introducing them to new audiences.

Established in 2013 with a gift from the late Donald Windham in memory of his partner of forty years, Sandy M. Campbell, the Prizes are celebrating their fifth year of existence. English language writers from anywhere in the world are eligible. Prize recipients are nominated confidentially and judged anonymously. The call that Prize recipients receive from program director Michael Kelleher is the first time that they have learned of their consideration.

This year’s Windham-Campbell Prize recipients are: in fiction, André Alexis and Erna Brodber; in nonfiction, Maya Jasanoff and Ashleigh Young; in poetry, Ali Cobby Eckermann and Carolyn Forché; and in drama, Marina Carr and Ike Holter.

Biographies of each of the eight recipients appear below.

The Windham-Campbell Festival will take place from September 13-15, 2017 at Yale, and begins with an awards ceremony and an invited speaker who gives a talk entitled, “Why I Write.” This year’s keynote will be delivered by Karl Ove Knausgård. Yale’s campus is in New Haven, Connecticut, two hours by train from both New York and Boston, and all events are free and open to the public.

The Windham-Campbell Prizes are administered by the Beinecke Rare Book and Manuscript Library at Yale.

Biographies of the 2017 Windham-Campbell Prize Recipients:

André Alexis was born in Trinidad and grew up in Canada. He is the author of many books, including six novels, a short story collection, and a book of nonfiction. Across all genres, he works in astonishingly clear, supple prose that propels readers through the complex philosophical questions—How does an awareness of mortality shape consciousness? What is the relationship, if any, between love and reason?—that have pre-occupied him through two decades of work. Alexis’s books refashion old forms: his debut novel Childhood (1998) makes use of footnotes, graphs, and lists, while Beauty and Sadness (2010) blends fiction and essay. His latest project is a five-part series of novels that he describes as a “quincunx.” Beginning with Pastoral (2014) and continuing through Fifteen Dogs (2015) and The Hidden Keys (2016), each book has attempted to resuscitate a forgotten or neglected genre: the pastoral, the apologue, the quest narrative. He has received many honors, including the 2015 Scotiabank Giller Prize.

Activist, scholar, and writer Erna Brodber has, over the course of a four-decade career, established herself as a major voice in Caribbean literature. Her distinctive poly-vocal narratives draw upon the oral and scribal traditions of the African diaspora, echoing sources as diverse as the folk tales of Anansi the spider-god and the modernist novels of James Joyce. Her protagonists contend with destructive magical forces, in the process recovering their own lost or stolen histories—what Brodber describes as “the half [that has] not been told.” In Myal (1988), Louisiana (1994), The World Is a High Hill (2012), and Nothing’s Mat (2014), she skillfully uses elements of Afro-Jamaican cosmology to convey the richness of diasporic traditions, as well as the danger of forgetting them. For Brodber, the past is never dead—an idea she literalizes in Myal, where “spirit thievery” and zombification become a powerful trope for the psychological and political legacies of colonial exploitation. A winner of a Prince Claus Award (2006), the Musgrave Medal (1999), and the Commonwealth Writers’ Prize (1989), Brodber holds an Honorary D.Litt. from the University of West Indies at Mona (2011). She lives in the village of Woodside, Saint Mary, Jamaica.

Maya Jasanoff is the Coolidge Professor of History at Harvard University and the author of two award-winning works of nonfiction. The first, Edge of Empire: Lives, Culture, and Conquest in the East, 1750-1850 (2005), investigates Britain’s expansion into Egypt and India through the lens of European art collectors. Her most recent book, Liberty’s Exiles: American Loyalists in the Revolutionary World (2011), was praised by critic and historian Linda Colley as “vivid, superbly researched and highly intelligent.” It tells the previously untold story of the more than sixty thousand loyalists who fled the United States in the years following the American Revolution, settling in places as diverse as Jamaica, Nova Scotia, and Sierra Leone. Liberty’s Exiles won numerous distinctions, including the George Washington Book Prize and a National Book Critics Circle Award. Jasanoff has been an ACLS Charles A. Ryskamp Fellow, a Cullman Center Fellow at the New York Public Library, and a Kluge Fellow at the Library of Congress. Her book reviews and essays have appeared in numerous publications, including The Guardian and The New York Review of Books. Her new book The Dawn Watch: Joseph Conrad in a Global World will be published by Penguin Press in November 2017.

Born and raised in Te Kūiti, New Zealand, Ashleigh Young is the author of the critically acclaimed book of poetry Magnificent Moon (2012) as well as the essay collection Can You Tolerate This? (2016). A series of twenty-one personal essays, Can You Tolerate This? tells the story of a girl growing up in a small New Zealand town and making her way as an adult into the wider world. But Young’s meditations on her own autobiography always lead outward, toward the lives and experiences of others. Her work reveals unlikely connections and resonances, discovering echoes between the lives of a little girl in Te Kūiti, a stone-collecting postman in rural southwestern France, and an American boy born with a second skeleton. An editor at Victoria University Press, Young is also a creative writing tutor at the International Institute of Modern Letters, Victoria University of Wellington.

Ali Cobby Eckermann is an Aboriginal poet and visual artist from South Australia who has published and performed her work around the world. Her debut collection of poetry, Little Bit Long Time, was published in 2009 as part of the New Poets Series of the Australian Poetry Centre. Since then, she has produced a substantial and formally innovative body of work, including the award-winning 2015 collection Inside My Mother. Eckermann has described Inside My Mother as an “emotional timeline” of the Stolen Generations, the thousands of children of indigenous descent—among them Eckermann herself, as well as her mother and son—taken from their families by the Australian government. Eckermann’s other books include the prose memoir Too Afraid to Cry (2013), which was awarded a Tangkanungku Pintyanthi Fellowship, and the verse novel Ruby Moonlight (2012), which was named the New South Wales Book of the Year and also won the Kenneth Slessor Prize for Poetry. In addition to her work as a writer, Eckermann is also the founder of Australia’s first Aboriginal writers retreat, and has edited a special issue of the journal Southerly on Aboriginal writing.

A native of Detroit, Michigan, Carolyn Forché is the author of five books of poetry, including the forthcoming In the Lateness of the World (2018). Her many honors include a Los Angeles Times Book Prize (1994), a James Laughlin Award (1981), and the Yale Younger Poets Prize (1976). Over the course of her long career Forché has come to believe that a keen attentiveness to historical, political, and social forces enriches literary art, as well as making it a powerful site of resistance. Her ground-breaking anthologies collect what she calls “poetry of witness,” and her own work illuminates some of the darkest moments in twentieth century history, including the Holocaust, the atomic bombings of Hiroshima and Nagasaki, and the Salvadoran Civil War. Forché is also Professor of English and Director of the Lannan Center for Poetics and Social Practice at Georgetown University, and has been recognized for her extensive work as an editor, translator, and human rights activist.

Marina Carr is a singular voice in world theater. The author of more than a dozen critically acclaimed plays, she came to international attention with The Mai (1994), the first in a trilogy of plays inspired by the works of Euripides and Sophocles. Like its successors Portia Coughlin (1996) and By the Bog of Cats (1998), The Mai doesn’t so much adapt as reinvent its source material, finding an ancient darkness in the hills and valleys of contemporary rural Ireland. Carr’s persistent focus in both the “Midland Trilogy” and her other work is female experience in its most mythic and paradoxical aspects: the power and vulnerability it embodies, the desire and disgust it provokes. In Ariel (2002), a sixteen-year-old girl suffers violence at the hands of her father, a religious fanatic; in Woman and Scarecrow (2008), a dying woman—mother to eight children and wife to an unfaithful husband—considers her failed struggles to gain agency in her own life. Hecuba, which premiered at the Swan Theatre in Stratford-upon-Avon in September 2015, continues to explore the cultural and political marginalization of women. Carr, who teaches at Dublin City University, is the winner of a Puterbaugh Fellowship (2012), the E. M. Forster Award (2001), and a Susan Smith Blackburn Prize (1997), among many other honors.

Ike Holter has emerged from Chicago’s indie scene to become one of American theater’s most exciting young artists. His breakthrough play Hit the Wall, first presented at Chicago’s Steppenwolf Theatre Garage in 2012, established his reputation for exquisitely written dramas featuring multi-generational, multi-racial casts. Set in Greenwich Village in June 1969, Hit the Wall is both a loving character study and a propulsive historical thriller, detailing the lives of the Village’s motley inhabitants—drag queens and stoners, cops and freedom fighters—in the hours leading up to the bloody police raid at the Stonewall Inn. Holter’s 2014 play Exit Strategy brings his examination of resistance and violence to contemporary Chicago as, over the course of a failing public school’s final year, administrators, students, and teachers battle civic apathy, low test scores, funding cuts, a rodent infestation, and casual violence. His most recent work, Sender, premiered at A Red Orchid Theatre in April 2016. Combining what Charles Isherwood of The New York Times has called “sharp characterization and crisply funny dialogue,” Holter’s plays establish a new kind of political poetry: at once oracular and defiant, it bears witness to invisibility and injustice, echoing Hit the Wall’s choral incantation: I was there.