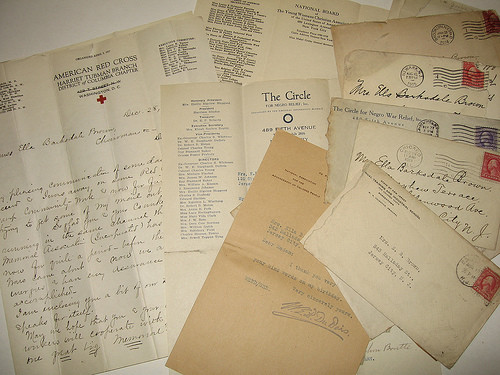 Ella Barksdale Brown, educator, anti-lynching activist, suffragist, and journalist, was born in Milledgeville, Georgia, and was a member of the first graduating class of Spelman Seminary (later Spelman College) in 1887. According to her obituary, she was born to former slaves, Jefferson Barksdale and Julia Lamar Barksdale on June 22, 1871. Ella Barksdale married John M. Brown in Georgia in 1898, and they moved to Jersey City, New Jersey, in 1901 where John worked for the Pullman Company. The couple had four children: Marcia, Jefferson Barksdale, Mildred, and Miriam. Among Brown’s accomplishments as an educator and activist, she is credited with introducing the study of African American history to Jersey City public schools. She is also credited with persuading the New Jersey Federation, in 1949, to designate March fifth as Crispus Attucks Day in New Jersey.

Brown was also a journalist who wrote for well known African American newspapers of the early twentieth century including The Chicago Defender and The New York Amsterdam News. A devoted educator, she was sought after by area Jersey City high schools and community organizations to deliver lectures on African American history. Her community and national activism gained her personal acquaintance with some of the leading civil rights proponents and African American leaders of the early twentieth century including W. E. B. Dubois, Booker T. Washington, Paul Robeson and James Weldon Johnson. Some of the community organizations she was most involved with were the National Association for the Advancement of Colored People, the Circle for Negro War Relief, the New Jersey Civil Rights Bureau and the National Association of Colored Women.

The correspondence documents Ella Barksdale Brown’s personal and professional relationships including those with figures and organizations prominent in the civil rights movement. The printed materials document her interest in education and particularly her life as an educator. Her personal writings include two speeches/essays entitled “The Negro’s Burden” and “The Negro’s Contribution” (both undated) plus other short writings that document her work as a civil rights activist, educator and anti-lynching activist. A group of financial papers document Brown’s and her family’s ownership of property in New Jersey and Georgia.