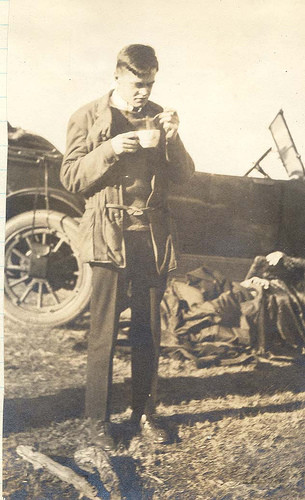 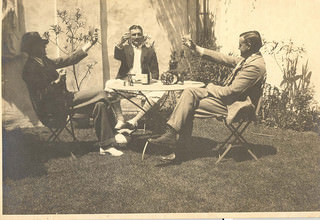 The Farwell Knapp Papers, containing correspondence with the poet H. Phelps Putnam, are now available for use at the Beinecke Library. Putnam’s poetry gained prominence in the twenties and thirties but has since gone largely unnoticed. In his foreword to The Collected Poems of H. Phelps Putnam (1971), Edmund Wilson writes, “It has seemed to me strange that the name of Phelps Putnam should have vanished so quickly from memory” (v). Over the course of his brief career, Phelps Putnam published two books: Trinc (1927) and The Five Seasons (1931).

Born in Massachusetts in 1894, Putnam attended Philips Exeter Academy before enrolling at Yale University. A member of the secret society Skull and Bones, Putnam is also categorized as part of the Renaissance generation at Yale, which includes alumni such as Stephen Vincent Benét, Henry R. Luce, Archibald MacLeish, Cole Porter, and Thornton Wilder.

After graduating, Putnam traveled to Europe and worked a series of odd jobs, which included a brief period as an assistant editor for The Atlantic Monthly press and writing advertising copy for an insurance company. Putnam’s first book of poems, Trinc (Rabelaisian for drink), was published in 1927. Following Trinc, Putnam set to work on an epic, to be titled The Earthly Comedy, which would, he planned, recount modern life and feature characters such as Bill Williams and his alter ego Bigelow Hasbrouck. The publication of The Five Seasons (1931) features these characters and marks the beginning of Putnam’s work towards producing The Earthly Comedy. Putnam never produced The Earthly Comedy before his death in 1948, perhaps thwarted by his ill health (asthma and alcoholism) and the paralyzing ambition of his plans. As F.O. Matthiessen acknowledges in his essay “To the Memory of Phelps Putnam,” Putnam “sketched a poem too vast ever to be able to shoulder the weight of writing it” (The Collected Poems of H. Phelps Putnam, 200).\Putnam wrote little in his later years; his later work consists largely of poetry published in various magazines and lyrics for a musical c llaboration with Harl McDonald entitled Songs of Conquest: Cycle for Chorus of Mixed Voices (1937).

Putnam’s love life appears to have superseded his poetic reputation. Twice married (to Ruth Peters and Una Fayerweather), Putnam had numerous affairs, including trysts with Katharine Hepburn and painter Russell Cheney. In her autobiography Me, Hepburn writes of Putnam:

I took one look at him and I was stricken with whatever it is that strickens one at once and for no reason when one looks at a member of the opposite sex. He absolutely fascinated me. I flew up onto a pink cloud [ … ]. (88). The Farwell Knapp Papers contain Putnam’s correspondence with Farwell and Helen Bayne Knapp as well as Farwell’s journals with observations and comments about Putnam and their circle of friends. Knapp, who was a tax lawyer, met Putnam while both were at Yale and members of Skull and Bones. Putnam in fact introduced Knapp to Helen Bayne, who Putnam had met in Colorado through her uncle Russell Cheney. Helen Bayne provided comfort for the depressive Putnam, especially in 1929, as Putnam struggled to overcome his relationship with Katharine Hepburn. At this time Helen joined Putnam in New York and the two had a brief affair. Of this period Putnam wrote to Helen:

For pain shared and taken as you shared and took mine is pain forgotten. But I know that the way you treated it and me made it something less horrible and killing. You said ‘You shall go on and write your poetry.’ And I think it likely that I shall’ (March 27th, 1929, Folder 111, Farwell Knapp Papers, Yale Collection of American Literature, Beinecke Rare Book and Manuscript Library).

The Farwell Knapp Papers provide useful insight into Putnam’s personal life and career. Knapp’s journals are also interesting in that he wrote extensively about his health and sexuality. (HD)