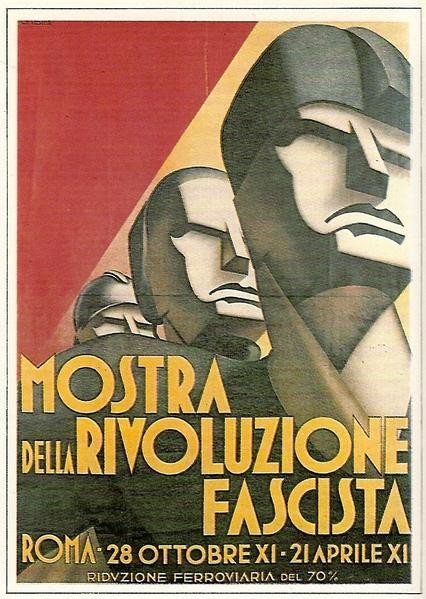 Interesting events–both real and imagined–you may not have known about Fascist Rome. Mussolini famously had a flair for the dramatic.  As the leader of the powerful Fascist party in an Italy on the verge of civil war, he came to power by threatening a violent coup, the “March on Rome.”  Supported by some 30,000 Fascist supporters waiting just outside Rome, some armed with farm tools, Mussolini was confidently, if naively prepared to face the Italian armed forces.  His gamble worked: King Victor Emmanuel folded under pressure and appointed Mussolini Prime Minister on October 30th, 1922.  In a pompous display, the march triumphantly paraded through Rome anyway. (Though the Duce himself took the express train, save for a few photo opportunities.)  This symbolic spectacle that heralded Mussolini’s inauguration became one in a series of mass-media events that both popularized and legitimized the Fascist party itself. 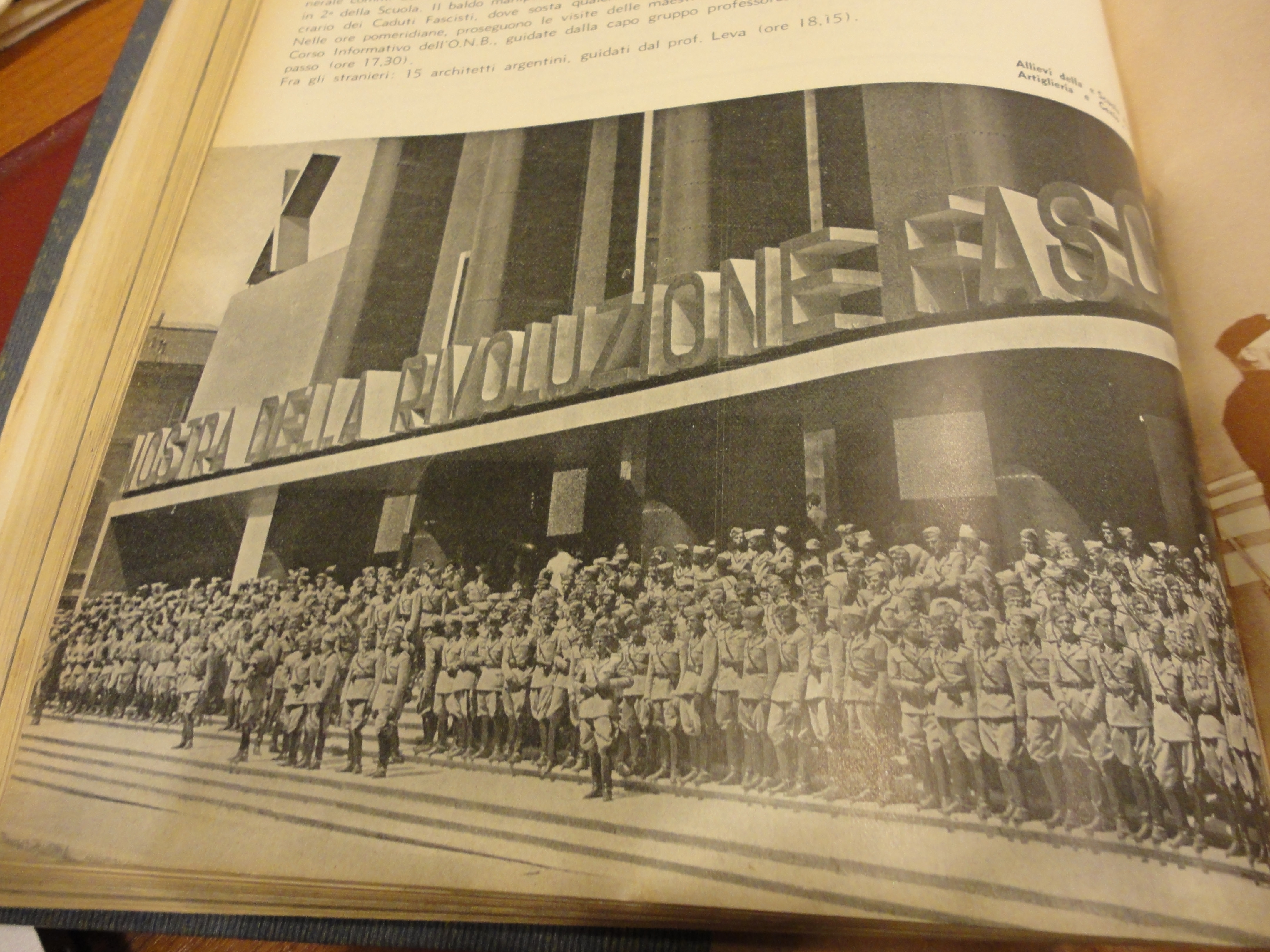 Front facade of Palazzo at the Mostra

Ten years later, the Mostra della Rivoluzione Fascista or “Exhibition of the Fascist Revolution,” told the story of Fascism’s rise to greatness, bringing together items and relics–newspapers, letters, albums, manifestos–from all over Italy.  It was a wildly popular propaganda machine, attracting 3 million visitors. Making use of contemporary styles in graphic arts and architecture, the Mostra both modernized and monumentalized the Fascist aesthetic experience. 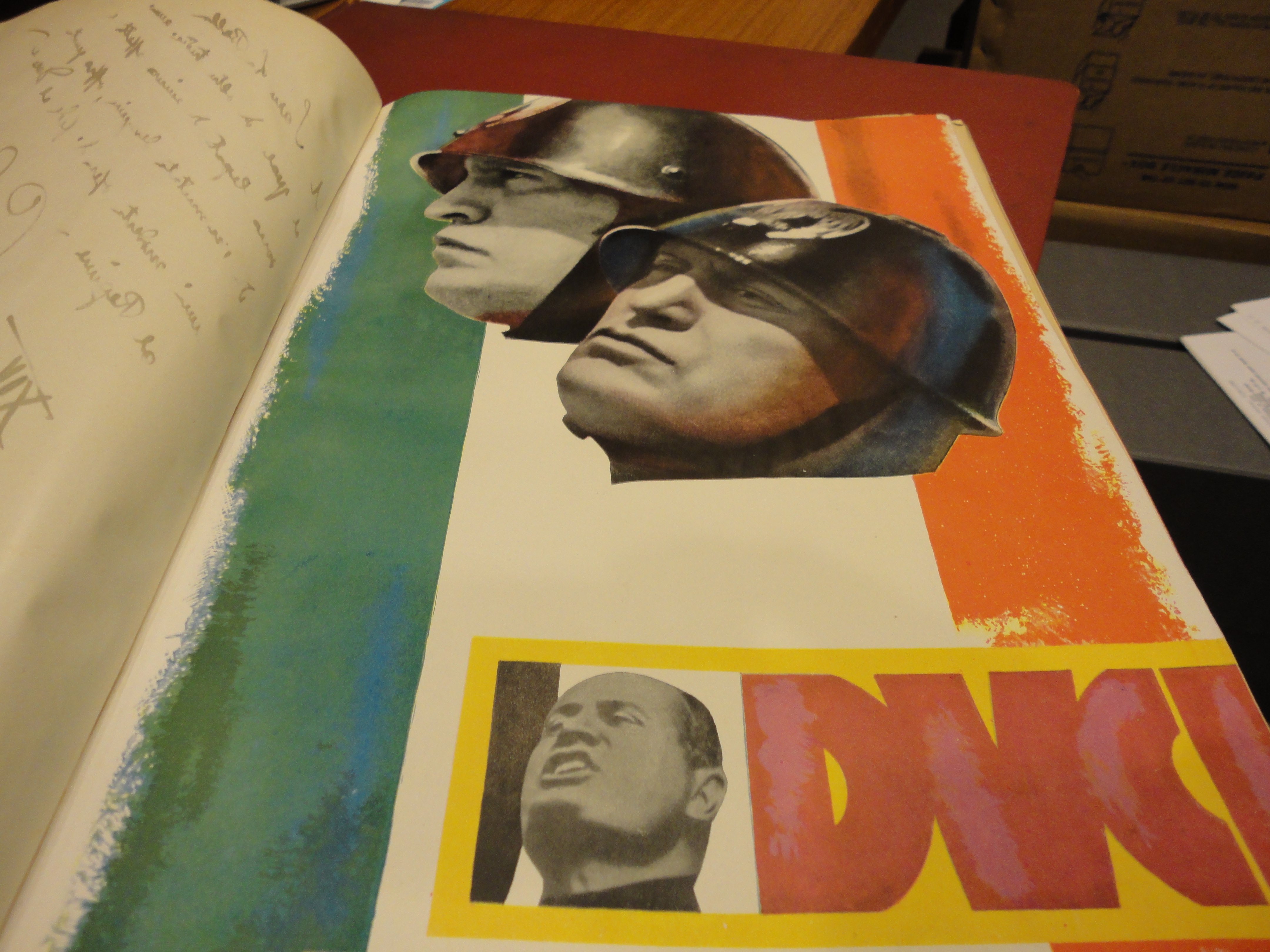 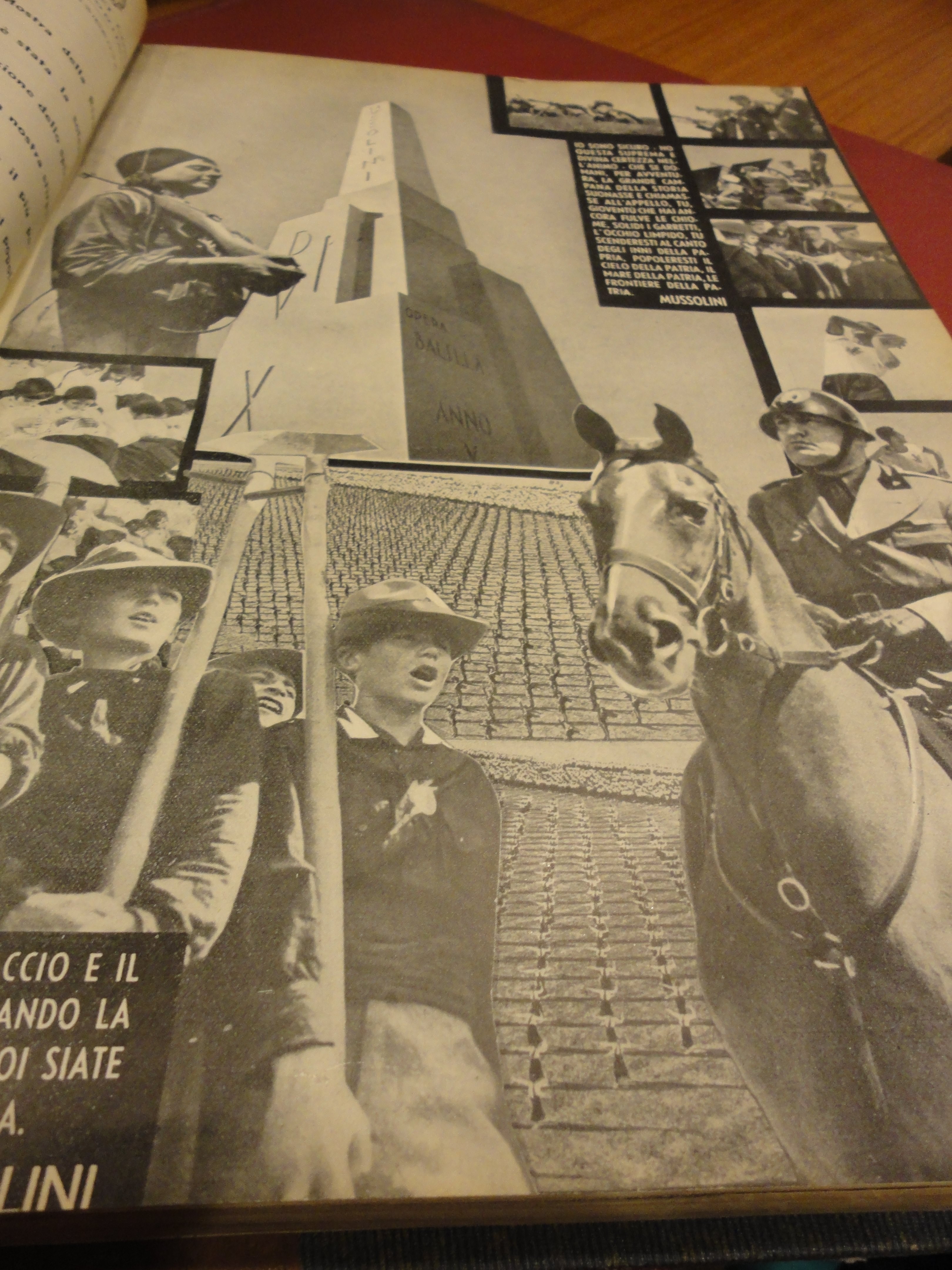 Teams of artists and historians meticulously designed 23 exhibition rooms at the Palazzo delle Espozione to affect an emotional, even spiritual response.  Depicting a “cycle of crisis, redemption, and resolution,” (Maria Stone) and frequent references to martyrdom, the viewer is led to worship at the altar of Fascism.  Beyond solidifying political support, the Mostra–which offered travel discounts and other perks to incentivize visitors–also became a nationalist celebration, a registering of what it meant to be Italian.  Italiani e stranieri alla Mostra della Rivoluzione at Beinecke is a huge volume which recounts the 2 year exhibit in detail, illustrated by large-scale photomontages.  It is fascinating to see this account of the Mostra by Franceso Gargano: as carefully curated as the show itself, Italiani e stranieri manages to legitimize Fascist aims in recognizable avant-garde fashion.

In another gigantic volume at Beinecke we learn of the elaborately imagined and haflway realized “Espozione Universale Roma”, or World’s Fair, of 1942.  Designed by Mussolini to celebrate 20 years of Fascism and stymied by the war, the EUR was also a project to expand Rome to the southwest, toward the sea.  The plans for a grandiose Fascist wonderland are fun to look through; talk about hubris. 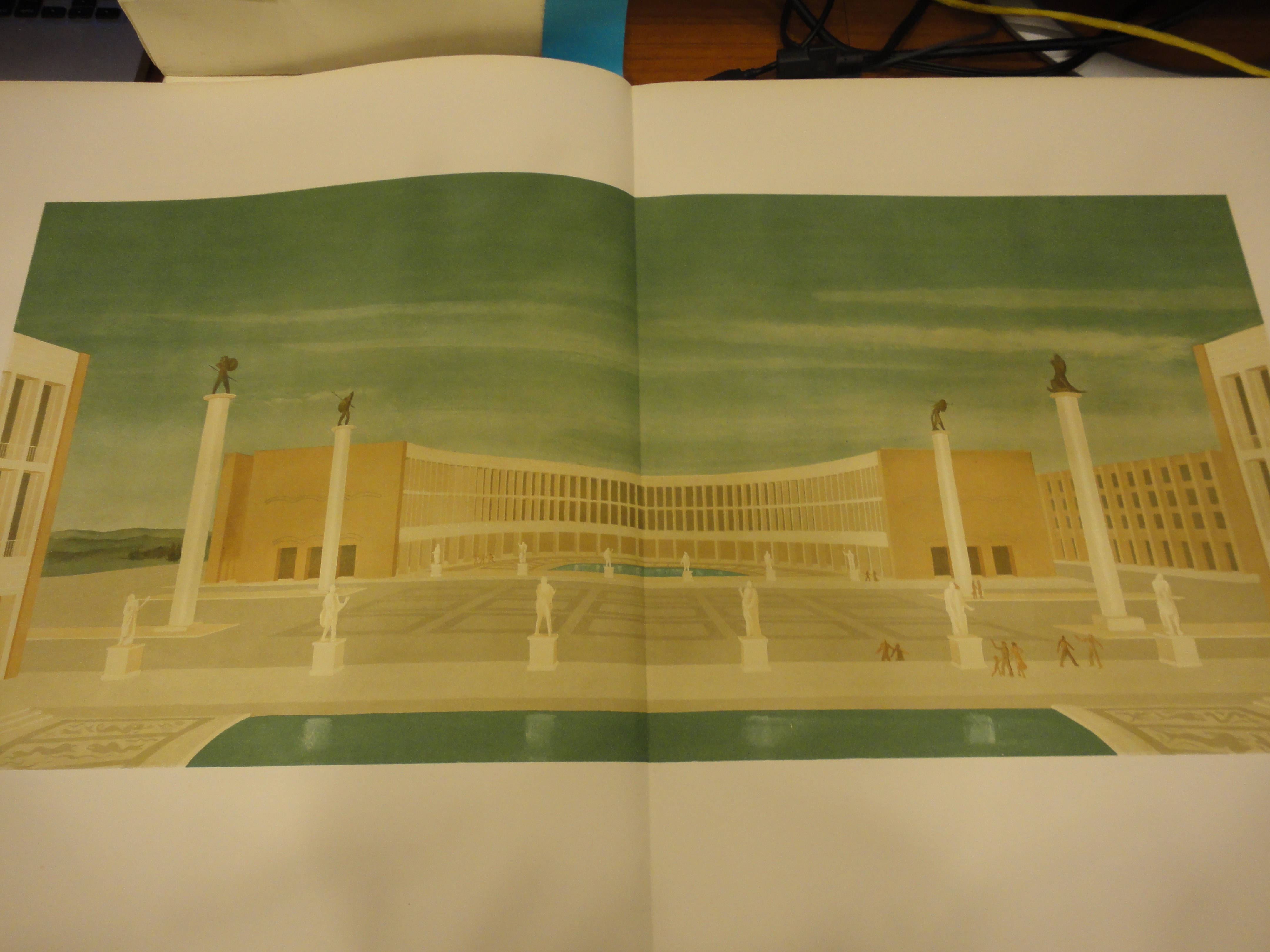 Plans for the EUR pavillion 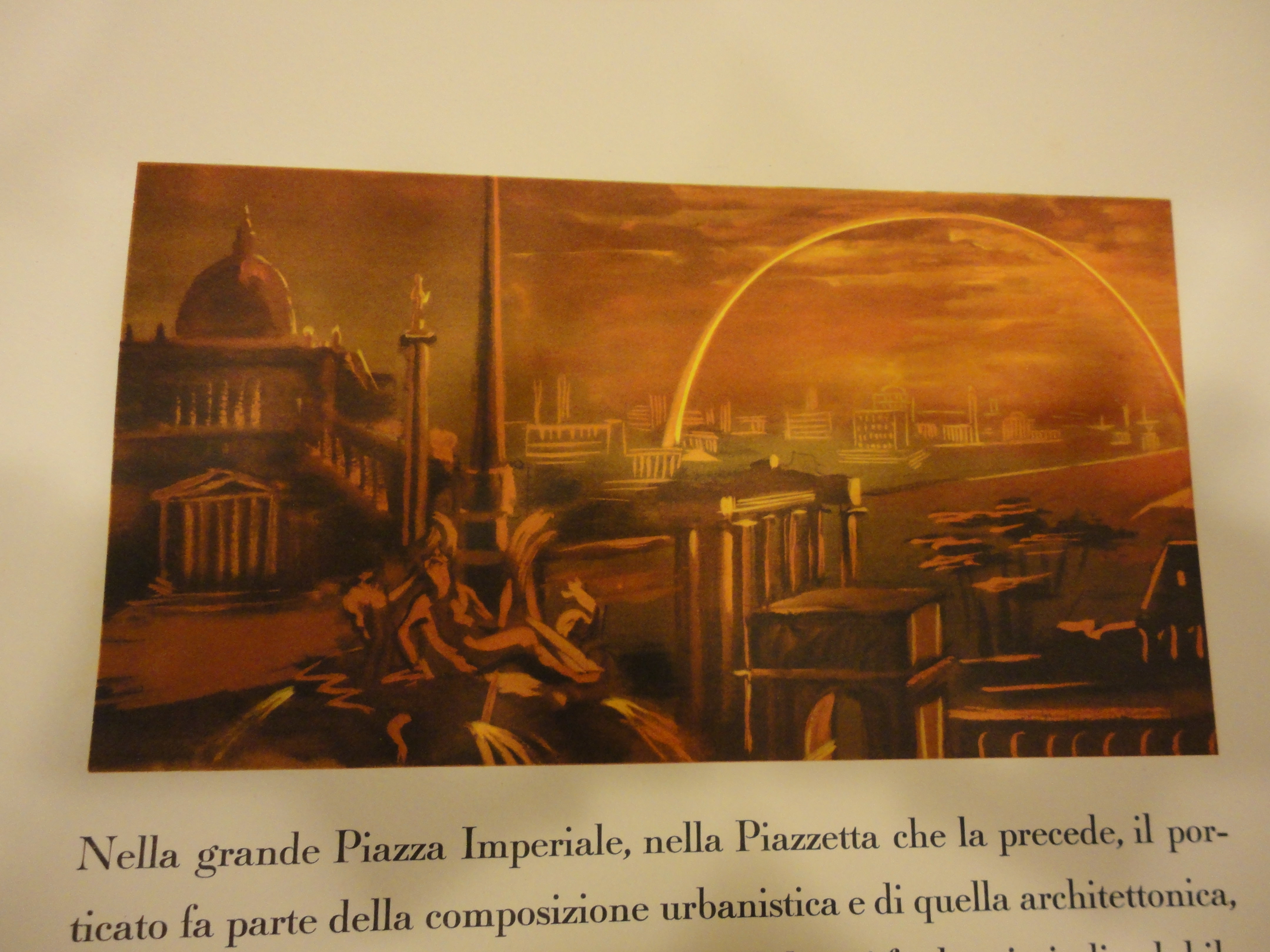 The EUR was slowly completed, though not entirely in the Fascist style, almost entirely for the 1960 Olympics.  The planned archway instead became a Sports stadium. Nowadays, it is a business and government district.  The NYTimes gave a great overview of it in 1999.