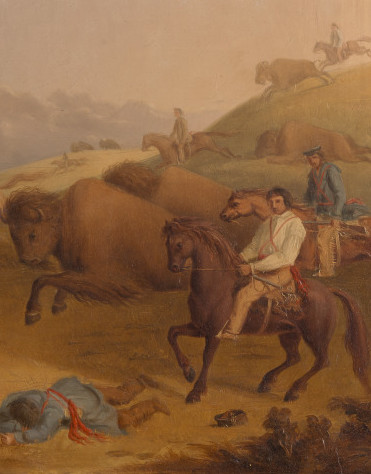 This month saw the addition of many one-of-a-kind items to our Digital Library, such as this commentary on the al-Burda (a well-traveled Sufi poem in praise of the Prophet), an oil painting of triple-threat James Gates Percival (an accomplished geologist, linguist, and poet), and an illuminated manuscript which depicts an angel leading its author to the Fountain of Penitence. Of equal significance are our newly digitized many-of-a-kind items: Music, illustrations, and text are each employed to reveal the “secret nature of chemistry” in this Latin alchemical book. One map advertised emphasized the ease of labor and the abundance of water in the Salt River Valley. Interested scholars can now view exhibition catalogs for Suzanne Duchamp’s paintings, a poster for Barbara Hammer’s experimental queer documentary Nitrate Kisses, and five dust jackets from books published by Alfred A. Knopf, Inc. in the 1930s-40s—works that all illustrate how painters, filmmakers, writers, and publishers participate in their own reception histories. These reproduced works challenge us to not view an object’s uniqueness as indicative of its value.

Four oil paintings by Paul Kane have been digitized. These mid-19th century works depict Pacific Northwestern landscapes including waterfalls, rivers, buffalo at ease, and buffalo in peril. An additional mountain scene from this collection has unclear authorship. Osborne Russell chose verse to memorialize the life of the hunter in the Rocky Mountains and the effects of overhunting: “But now those scenes of cheerful mirth are done […] / The numerous trails so deep by Bisons worn / Now teem with weeds or overgrown with grass […].” Russell’s prose adds hues of loss to Kane’s paintings.

The Samuel R. Delany papers found many readers this month. Delany is often pigeonholed as a science-fiction writer, though his papers elude easy categorization. Newly digitized items include  journals and diaries, photographic accounts of getting tattooed, fan mail from Cyberpunk genre-founder (and style icon) William Gibson, and, yes, science-fiction illustrations. Delany’s elision of categorization shines in Times Square Red, Times Square Blue, his academic monograph which combines ethnography, photojournalism, critical theory, and erotic memoir to document gay sexual life around 42nd Street and the gentrifying forces which eradicated it by the mid-1990s. Photographs document buildings which no longer stand, closed theaters, and the men who inhabited these tenuous spaces. Despite demolition, Delany is hopeful that pornographic theaters can instruct readers on the creation of new institutions that promote contact across classes, races, and genders—making our newly digitized original photographs and design drafts from his monograph a key resource for those seeking to make a better word possible.

These dissimilar definitions can be easily joined: This photograph contains a hidden gay club. When “the building was demolished, substantial pieces of its mirrors and mosaics clung to the brick wall for another year, till they too were pulled down, a glittering reminder of the young men who had worked there” (Delany p. 107). The reminder is coruscating—it physically glitters— and coruscating—it protests its own removal.