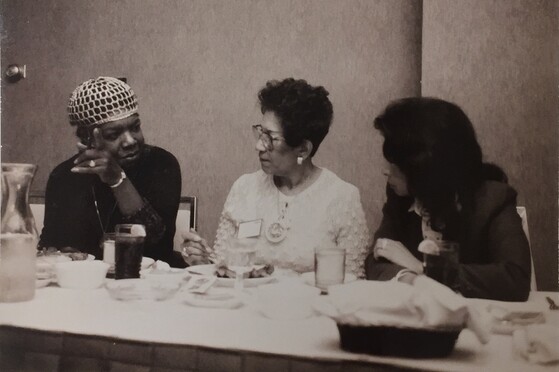 “Out of such chaos, of such contradiction / We learn that we are neither devils nor divines”

— “A Brave and Startling Truth”

Maya Angelou was an American poet, autobiographer, and activist. Alongside her writing career, Angelou was a singer, dancer, actress, and Hollywood’s first female black director. As an activist, she worked for Malcolm X and Dr. Martin Luther King Jr., and across her lifetime, she was awarded over 50 honorary degrees, including the National Medal of Arts and the Presidential Medal of Freedom. Angelou joined the Harlem Writers Guild in the 1950s.

Researchers may be interested in Angelou’s explorations of sound, memory, and sexuality in her poetry and prose. Angelou’s texts, performances, and collaborations trace and mark historical moments and movements, and her words investigate the history of Black oppression, activism, and power in America. The Beinecke holds many uncorrected first proofs of Angelou’s books, and researchers may use these texts to investigate the processes of book-making and publishing.

Books of Prose and Poetry

Just Give Me a Cool Drink of Water ’fore I Diiie, Maya Angelou, 1971

Angelou also wrote a multi-volume autobiography, beginning with I Know Why the Caged Bird Sings and ending with Mom & Me & Mom.

I Know Why the Caged Bird Sings, Maya Angelou, 1969

Gather Together in My Name, Maya Angelou, 1974

Singin’ and swingin’ and gettin’ merry like Christmas, Maya Angelou, 1976

Wouldn’t Take Nothing For My Journey Now, Maya Angelou, 1993

Angelou was also a singer, dancer, actress, and director. She often performed her poetry.

I Dream a World: Portraits of Black Women Who Changed America, Brian Lanker with a foreword by Maya Angelou, 1989

My Painted House / My Friendly Chicken / and Me, Maya Angelou, photographs by Margaret Courtney-Clarke, 1994

Women on War / Essential Voices for the Nuclear Age from a Brilliant International Assembly, edited by Daniela Gioseffi