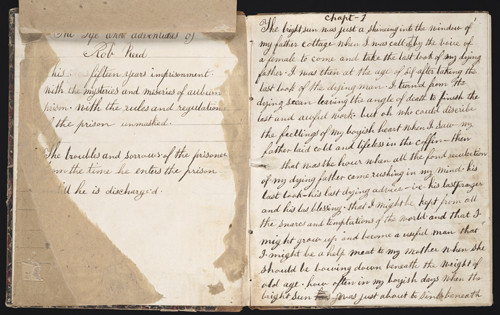 Scholarly detective work has revealed that an 1858 manuscript, housed at Yale’s Beinecke Rare Book & Manuscript Library, is the earliest-known prison memoir written by an African American.

Acquired by the Beinecke in 2009, the book-length manuscript, titled “The Life and Adventures of a Haunted Convict” and written under the name Robert Reed, eloquently describes the author’s experiences while incarcerated in New York State from the 1830s through the 1850s. The memoir provides an insider’s account of the prison system and race relations in the mid-19th century.

Caleb Smith, professor of English and American Studies, has authenticated the manuscript and identified its author as Austin Reed, a free black man who was born in upstate New York.

“Finding any new text by an African-American author of the 19th century is significant, but this memoir has so much to say about captivity, freedom, and human rights. It is a truly remarkable discovery,” says Smith. “Today, our country’s sprawling prison system draws comparisons to plantation slavery. Reed’s narrative shows how an especially gifted prisoner in the 1850s was already making the same connection. It’s also a beautiful and haunting piece of writing.”

As recounted in the memoir, which was never published, Reed served time as a child in The House of Refuge in Manhattan, the first reformatory for juvenile delinquents in the United States that combined punishment with education and productive labor. During this period, he learned to read and write, but was also frequently whipped.

Later, Reed served a series of sentences in Auburn State Prison – one of the first penitentiaries designed for rehabilitation.

Reed’s memoir was intended to introduce a curious public to life in the new institution – the solitary cells, the dining hall and the hospital, the work to be done in the various workshops, and regulations for inmate conduct. Reed’s account also aimed to expose the unusual and brutal punishments inflicted on dissenters, and he made a pointed comparison between New York prisons and the slaveholding South.

“The Reed prison narrative manuscript is a revelation. Nothing quite like it exists,” says David Blight, the Class of 1954 Professor of American History and director of the Gilder Lehrman Center for the Study of Slavery, Resistance, and Abolition. “Reed is a crafty and manipulative storyteller, and perhaps above all he left an insider’s look at the American world of crime, prisons, and the brutal state of race relations in the middle of the 19th century.”

Smith collaborated with archivists at the Beinecke and with Chris McKay, an expert genealogical researcher at New York’s Schomburg Center for Research in Black Culture, to assemble Reed’s story.

The key piece of evidence was an 1895 handwritten letter, preserved in state files, from Austin Reed to the warden of the House of Refuge that recounts some of Reed’s story and inquires whether the institution has maintained any records of his time as an inmate.

Research confirmed the accuracy of events and details given in the manuscript, and revealed that Reed decided to change certain parts of his story when he committed it to paper.

According to Smith, Reed composed one of the 19th century’s richest and most elaborate works in the tradition of “prison literature,” an evolving canon that includes classics such as “The Autobiography of Malcolm X” (1965) and Martin Luther King, Jr.’s “Letter from Birmingham Jail” (1963). Smith is preparing the manuscript for publication with a foreword by Blight and footnotes to provide context.

The Beinecke Library made the manuscript accessible online shortly after acquiring it in 2009. Study of the manuscript may be enriched by the important resources of the James Weldon Johnson Memorial Collection of African American Arts and Letters, which is housed at the Beinecke Library. In addition to outstanding holdings of printed books and ephemera documenting African American history and culture, the collection includes other 19th-century manuscripts by African American writers, such as “The Bondwoman’s Narrative by Hannah Crafts, a Fugitive Slave Recently Escaped from North Carolina,” (ca. 1853–1861], which was donated to the library by Henry Louis Gates, Jr. (Yale 1973).