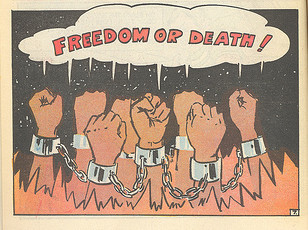 The Beinecke Library has acquired a rare group of illustrated history magazines devoted to important figures and events in African American history. Published in the 1960s and 1970s, the series is designed to encourage young readers to “develop interest for further study” by employing a “a new approach to history.”  The Golden Legacy series also hopes to “implant pride and self-esteem in Negro youth while dispelling myths in others.” Figures and subject featured in the series include Frederick Douglass, Toussaint L’Overture and the Birth of Haiti, Robert Smalls, Crispus Attucks, and black inventors. Records for the collection and for individual copies can be located in the Beinecke Libary’s Uncatalogued Acquisitions Database.

Images: Interior image from “Joseph Cinque and the Amistad Mutiny;” cover images of “The Saga of Harriet Tubman: The Moses of her People,” “The Life of Matthew Henson,” and “Black Cowboys.”