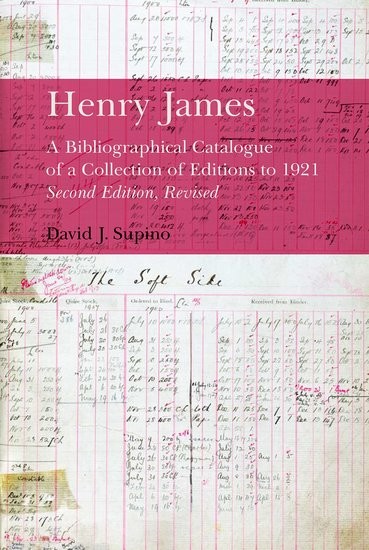 David Supino, Henry James: A Bibliographical Catalogue of a Collection of Editions to 1921, Second Edition Revised, Oxford UP, 2014.

In this revised edition of his acclaimed bibliographical catalogue of the works of Henry James, David Supino sheds new light on a number of crucial areas. It is only in fairly recent times that scholars and book collectors have come to appreciate fully the interest and significance of the dust jackets of early editions. Ignored in many earlier bibliographies, Supino provides much valuable new material in an area revealing the transition of dust jackets from a protective medium to an important marketing and advertising tool. His book also unearths new information on early Colonial re-issues and the first appearance of American editions. The new edition provides a full description of each edition in Supinos expanded collection including transcription of the title page, collation, contents, binding and inserted ads, inscriptions, bookplates, binders and booksellers tickets and commentary. His book performs a genuine service to the history of book and will be an invaluable resource for bibliophiles and Henry James fans alike.