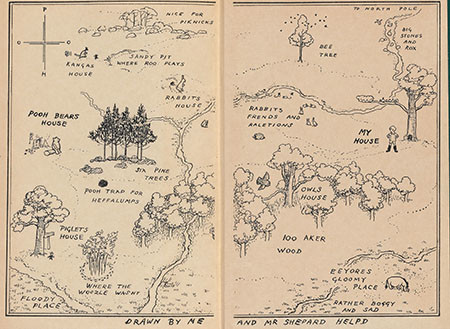 Readers would be hard-pressed to find a better point of entry into the imaginary world of Christopher Robin, Pooh Bear, Piglet, Roo, Rabbit and Eeyore than this splendid endpaper map of the “100 Aker Wood,” drawn by Ernest Shepard for A. A. Milne’s Winnie-the-Pooh.

The endpaper map does more than decorate the inside front cover. It provides a guide to the topographical and narrative landscape of Winnie-the-Pooh, and does much more besides. The action of each chapter in the book is charted by a specific location of the map, such as where Pooh and Piglet set the trap for Heffalumps, the Sandy Pit where Roo is snatched from his mother’s pouch and traded for Piglet, and, best of all, that elusive track, “Where the Woozle Wasn’t.”

In addition to the delightful setting of scene, the map delineates character, sometimes in surprisingly humorous ways. Pooh is often described in the book as “a bear of very little brain,” and the compass points that should provide direction to Winnie-the-Pooh spell out P-H-O-O, rather than N-S-E-W, turning the central character inside out and sweeping up the reader into the dizzying logic of Pooh.

Eeyore, the old blue donkey, is invariably depressed. In one chapter, he loses a tail; in another, he receives for his birthday a burst balloon and an empty pot of honey. Eeyore is a donkey who is down in the dumps, and Shepard cleverly places him physically there on the map, in the furthest southeast corner in the “Gloomy Place” that is “Rather Boggy and Sad.”

The first London edition of Winnie-the-Pooh was published by Methuen & Co. in 1926. The Beinecke also holds the first American edition, in which the endpaper maps are printed in red.