But Is It Illumination? 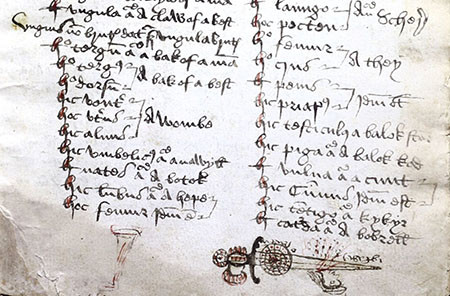 Archives have a delightful way of reminding us that nothing is new. A set of rough (very rough) drawings that decorate the margins of this manuscript Latin-English vocabulary, copied sometime in the fifteenth century, seem to say that to be bored by Latin grammar is simply to be human.

The quintessential heart shot through with an arrow suggests that Cupid may have been foremost on this scholar’s mind, even though the vocabulary that is set down in the first section of the manuscript lists the parts of the human body.  The text and illustration, however, are not entirely unrelated. The next two pages show a crude drawing of two hands, one holding a dog leash (manus), and the head of a man being struck off by the blade of an ornate sword (capud; gladius). Perhaps the head belongs to the man confounded by Cupid, depicted on the preceding page?

The writing is a difficult-to-read secretary hand, and, like the drawings, has a mark of untidiness. But these features in no way detract from the curious charm of what is essentially an early pictorial textbook.

The Latin-English vocabulary was a gift of Norman Holmes Pearson, a professor of English and American Studies at Yale. Pearson collaborated with Donald Gallup to establish the Yale Collection of American Literature, a cornerstone of the Beinecke Library. The vocabulary, for its part, is a wonderful complement to the library’s strong holdings of pre-1600 manuscripts and early printed books.