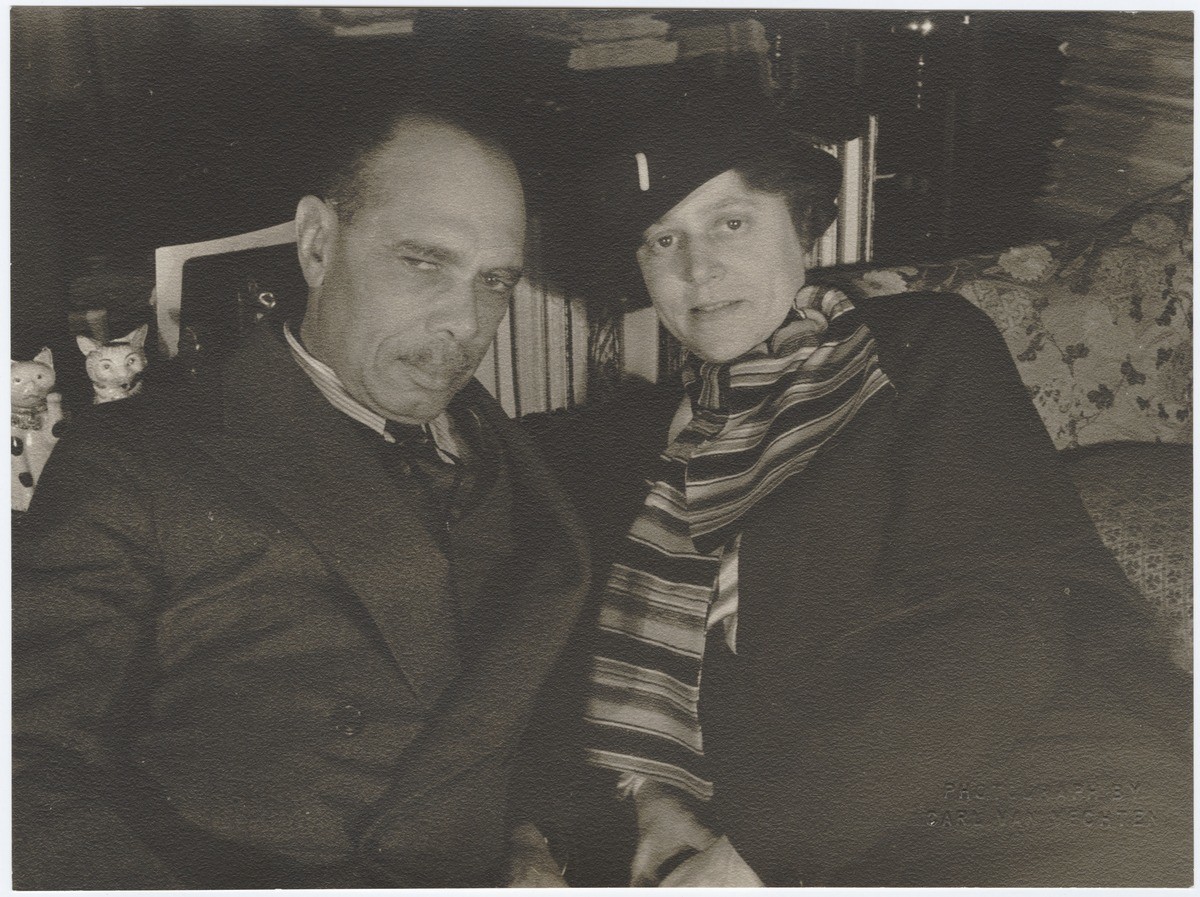 The James Weldon Johnson and Grace Nail Johnson Papers, recently re processed, are now available for research.  The new finding aid to the papers is available online:  The James Weldon Johnson and Grace Nail Johnson Papers (JWJ MSS 49).  The Papers provide evidence of the personal and professional life of James Weldon Johnson spanning the years 1850 to 2005, with the bulk of material dating between 1900 and 1976. The papers chronicle Johnson’s writing career and involvement in education, politics, and cultural affairs and consist of a variety of documents, including correspondence, writings, personal papers, scrapbooks, photographs, artwork, objects, and audiovisual materials. Johnson was involved in a number of significant movements and organizations during his lifetime, and, as a result, the papers also provide insight into broader topics in American and African-American history during the twentieth century. James Weldon Johnson (1871-1938) is best known for his work as an author and civil rights leader.  His publications include the fictional account The Autobiography of an Ex-Colored Man (1912) and poetry collections Fifty Years and Other Poems (1917), God’s Trombones (1927), and Saint Peter Relates an Incident (1936). Johnson also worked as a lyricist in collaboration with his brother, the composer Rosamond Johnson (1873–1954), with whom he wrote “Lift Every Voice and Sing” (1900).  This piece became the official song of the N.A.A.C.P. and was widely lauded as the “Negro National Anthem.”

Johnson served as Field Secretary and then as Executive Secretary for the National Association for the Advancement of Colored People (N.A.A.C.P.).  During his tenure Johnson investigated the American occupation of Haiti and lobbied for an anti-lynching bill (among many other endeavours).  Following his resignation as Secretary, Johnson continued his involvement with the N.A.A.C.P. on the Board of Directors.

In addition to these accomplishments Johnson worked for the United States Consular Service (in Puerto Cabello, Venezuela and Corinto, Nicaragua) and as an educator.  He began his career as principal at Stanton School (Florida) and later in his career he was a professor at Fisk University and New York University.  Johnson also studied law and became the first African-American licensed by an open examination in Florida. These various facets of Johnson’s professional life are represented in the papers, with particular emphasis on his career as an author. His writings include notes, background materials, drafts, published versions, and reviews, which combined, provide insight into various phases of the writing craft and the publishing process. Johnson often retained various drafts of his writings, many of which contain handwritten corrections and notes, providing rich evidence of his creative process. The only known extent copies of The Daily American, which Johnson established and which is believed to be the first daily African-American newspaper in the country, can be found in Johnson’s scrapbooks. Johnson’s correspondence with Grace Nail also reveals his ideas and ambitions as an author. His correspondence records more broadly his literary and social circles, with correspondents such as writers Benjamin Brawley, William Stanley Braithwaite, Sterling Brown, Claude McKay, and Anne Spencer as well as publishers such as Alfred Harcourt and Alfred and Blanche Knopf. Throughout his career, and particularly during the Harlem Renaissance and his professorships at Fisk University and New York University, Johnson mentored many aspiring authors, a role that is documented in his correspondence. The Johnsons were an influential couple during the Harlem Renaissance, mentoring and hosting artists, and the papers provide a window into this significant period in African-American cultural history.

Johnson’s work as an educator, lyricist, and member of the United States Consular Service, are also represented in the papers. For example, his early career as a teacher and ongoing interest in education are illustrated in photographs of Johnson as Principal of Stanton School (Jacksonville, Florida), his correspondence with Atlanta University, and his writings about African-American education.  Johnson’s tenure at Fisk University and New York University during the later period of his life is recorded in pedagogical documents ranging from lecture notes and syllabi to student papers. Combined, this material provides insight into Johnson’s role as an educator and his methods for teaching creative writing and literature.

Johnson’s work for the United States Consular Service is represented in his correspondence, reports, photographs, and printed ephemera, such as clippings and invitations. Johnson’s correspondence with Grace Nail during this period also provides insight into his experience

with the Consular Service. In addition this material documents American interests in South America during this period, such as the American intervention in Nicaragua, and consular life.

Johnson’s work as a lyricist and collaboration with his brother Rosamond Johnson and Bob Cole are chronicled in Johnson’s writings, which include drafts for various short song lyrics and “Lift Ev’ry Voice and Sing.” The Cole and Johnson Brothers song-writing team is also captured in photographs such as a portrait autographed by all three members. Johnson also maintained scrapbooks on musical comedy and theatre documenting various productions and performers during the early twentieth century. The Papers are thus a resource for understanding theatre and performance, particularly in New York, during the first half of the twentieth century. In addition to Johnson’s own materials relating to his work as a lyricist are those of his brother as well as research material gathered by Johnson while writing Black Manhattan.

There is a small amount of material relating to Johnson’s role in the N.A.A.C.P., however, the majority of this documentation is in the N.A.A.C.P. records at the Library of Congress. The Beinecke Library holds some of Johnson’s N.A.A.C.P. writings, such as his series of essays “Self Determining Haiti” based on his investigation on behalf of the Association on the American occupation of Haiti. In addition, Johnson’s personal relationships with prominent N.A.A.C.P. Board members, such as Arthur B. Spingarn, Joel E. Spingarn, and Mary White Ovington, are documented in his correspondence. A number of snapshots also record the Johnsons’ visits with Ovington at her home “Riverbank,” which influenced the Johnsons to likewise choose Great Barrington, Massachusetts, as the site for their summer home “Five Acres.” The Johnsons’ personal lives are also richly documented in the Papers, which include correspondence from early in their marriage, snapshots of the couple with friends and family, legal and financial records, and a number of other personal effects, ranging from stationery and Johnson’s last pen to monogrammed towels.

The Johnsons’ family and close friends (chiefly their protégée Ollie Jewell Sims Okala) are also documented in the Papers. Correspondence between family members as well as formal and candid photographs provide insight into the Johnson and Nail families, members of which are prominent in their own right. For example, Johnson’s correspondence with his brother, Rosamond, reveals information about the latter’s career as a successful musician and performer. The correspondence also records the lives of John B. Nail and John E. Nail, who were influential African-American businessmen largely involved in real estate. Other documents, ranging from legal and financial papers to personal papers, similarly document the Johnson and Nail families. For example, Mrs. Johnson avidly collected newspaper clippings and created scrapbooks, and in addition to documenting the Johnsons, this material chronicles the lives of John B. Nail, John E. Nail, Rosamond Johnson, and Mildred Johnson. (HD)