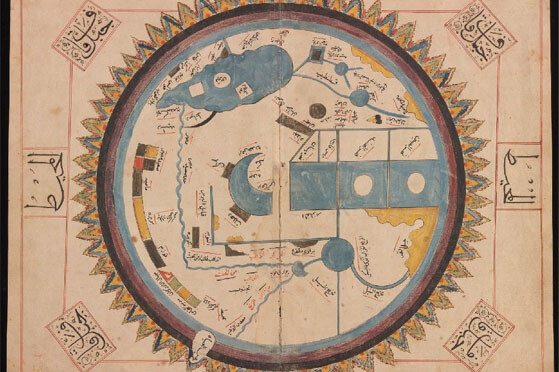 In January 2021, the Beinecke Rare Book and Manuscript Library launched its new Digital Library. A wide variety of brand new images joined our new platform this month including a German deck of playing cards from the Cary Collection, etchings from a Dutch 1791 edition of Robinson Crusoe, fifty slides relating to Augusto Boal and the Theatre of the Oppressed, photographs from rehearsals for Orson Welles’ production of Richard Wright’s Native Son, and a world map. Twenty-one years of correspondence between William Beckford and two art dealers are prefaced with a document certifying that one Patrick Dodd is eligible to serve as a private soldier in the East India Trading company, witnessed and authorized by William Beckford (senior). Four newly digitized issues of the anti-fascist newspaper Arbeiter illustrierte Zeitung feature remarkable handmade photomontages fifty-seven years before the release of Photoshop.

January also saw substantial additions to the Alfred Stieglitz / Georgia O’Keeffee archive in the Digital Library, especially of material concerning Stieglitz’s early and family life. Nine tintypes record Stieglitz childhoods, including precocious Alfred’s adventures in mustache cultivation. This mounted photograph of a newly-21-year-old Stieglitz’s room in Berlin shows that he hung an oil painting of himself by Fedor Encke above his desk. Cabinet cards featuring this same portrait and one other are now also on the Digital Library. Another cabinet card, also from Alfred’s Berlin days, features him with collaborators Louis Schubart and Joseph Obermeyer.

Finally, an album of illustrated postcards created Wilhelm Hasemann has been completely digitized. These sketches were used by the Stieglitz family to write letters to one another; they include rural scenes and illustrations of the Stieglitz family. Edward Stieglitz was a patron of Hasemann, and he also created his own sketches in Hasemann’s style.