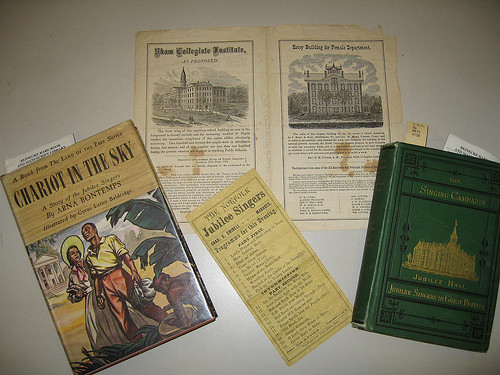 The Jubilee Singers were established in 1871 by Fisk University treasurer George L. White to raise funds for the newly-opened university. The group included eleven students—all former slaves—and two advisors who traveled the country and, eventually, across the Atlantic, performing; they became very well known and they were invited to perform for the President of the United States, the Queen and Prime Minister of England, among many others. They sang sacred hymns and Negro spirituals, dubbed “slave songs,” with an eye not only to earning money for their alma mater, but also to building up positive representations of African-Americans and African-American performance for the concert-going public. The proceeds from their first years of touring were enough to build Jubilee Hall, the first permanent building on the Fisk campus, still standing today.
Taking advantage of their acclaim, other groups toured the nation as “Jubilee singers.” Some of these groups followed the Jubilee Singers’ precedent of presenting strong positive images of African Americans, but most were bands of minstrels who appropriated the identifier “Jubilee” without adopting the Singers’ constructive principles.