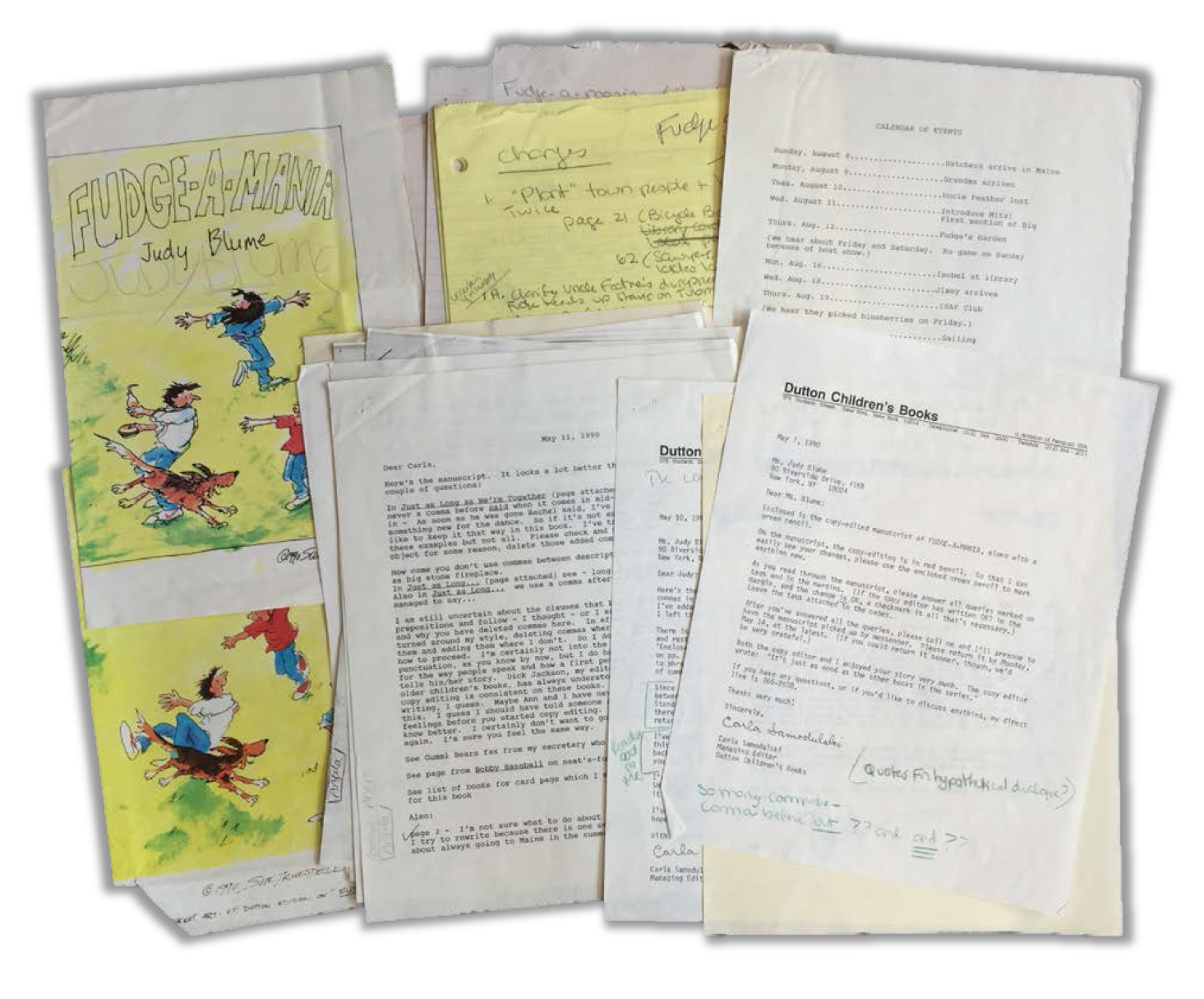 The Beinecke Library’s extensive holdings in children’s literature will soon grow with the addition of the archive of renowned young-adult writer Judy Blume, opening new opportunities for future research, teaching, and exhibitions related to this vital and vibrant cultural field.

“If you ask anybody on the street to name a young-adult writer, the response often is Judy Blume,” says Timothy Young, curator of modern books and manuscripts at the Beinecke Library. “She is the iconic person that you’ve read and you loved or you didn’t love but you knew her work.”

“Once upon a time, there were lots of picture books for children but not many stories for young-adult readers,” the Wall Street Journal’s Brenda Cronin writes. “Then along came Judy Blume. In the 1970s, the author of Are You There God? It’s Me, Margaret, spun pitch-perfect prose for adolescents and middleschoolers, detonating a genre that exploded with wizards, babysitters, vampires and the junior-high drama of BFFs and frenemies.”

The Judy Blume archive spans more than four decades and documents the writing of over 20 published books, all of which are beloved across generations to readers of all ages. The reach of Blume’s work is a testament to the timelessness of each story, and to her great talent for capturing the challenges of growing up: she’s helped millions of readers grapple with childhood and adolescence and all that these life stages can involve. But she didn’t stop there; Blume has also tackled adulthood, writing about marriage, motherhood, fidelity, and adult friendship (among many other things).

The archive includes several unpublished early works – including a 128 pp. story, “Donna and Jessie’s Name Hunting Society” – as well as the earliest incarnation of Fudge and Peter, the characters who would later appear in Superfudge and Fudge-a-mania – as a 12-page story titled “Peter, Fudge, and Dribble.” Among the published works represented in the archive are: “Flying Munchgins,” Blume’s first published story; Are You There God? It’s Me, Margaret (1970); Otherwise Known as Sheila the Great (1972); Starring Sally J. Freedman as Herself (1977); Superfudge (1980); Just As Long As We’re Together (1987); Fudge-a-mania (1990); and Double Fudge (2002).

In addition to manuscript material, the archive notably also documents the reception of Blume’s work, from censorship and banning to grateful outpourings from legions of fans. Indeed, her enormous impact on her readers over the years is represented with thousands of letters from children, teens, parents, teachers, and librarians that run the gamut from simply thankful for her books to heartbreakingly candid about an astounding range of hardships.

“Young-adult literature is among the most popular and beloved genres among readers,” notes Young, “and yet one of the most largely unexamined areas of archival study. My colleagues and I are excited about this acquisition for how it complements our existing collections and, especially, for how it will excite current and future generations of scholars and students.”

“Just as her books have been a gateway to lifelong reading for so many,” Young observes, “the Judy Blume archive will be a gateway to new scholarship that will inform and inspire people for a very long time.”

The depth and breadth of the Beinecke Library’s holdings in children’s literature, and their value to scholars, was showcased in the book Story Time, published in January 2017, which brings together 14 essays written by researchers who have worked in the Betsy Beinecke Shirley Collection of American Children’s Literature at Yale. To learn more about that book and the collection, please click here.

The Judy Blume archive will begin to be accessible to researchers later in 2018.