King, Woodward, and The Strange Career of Jim Crow 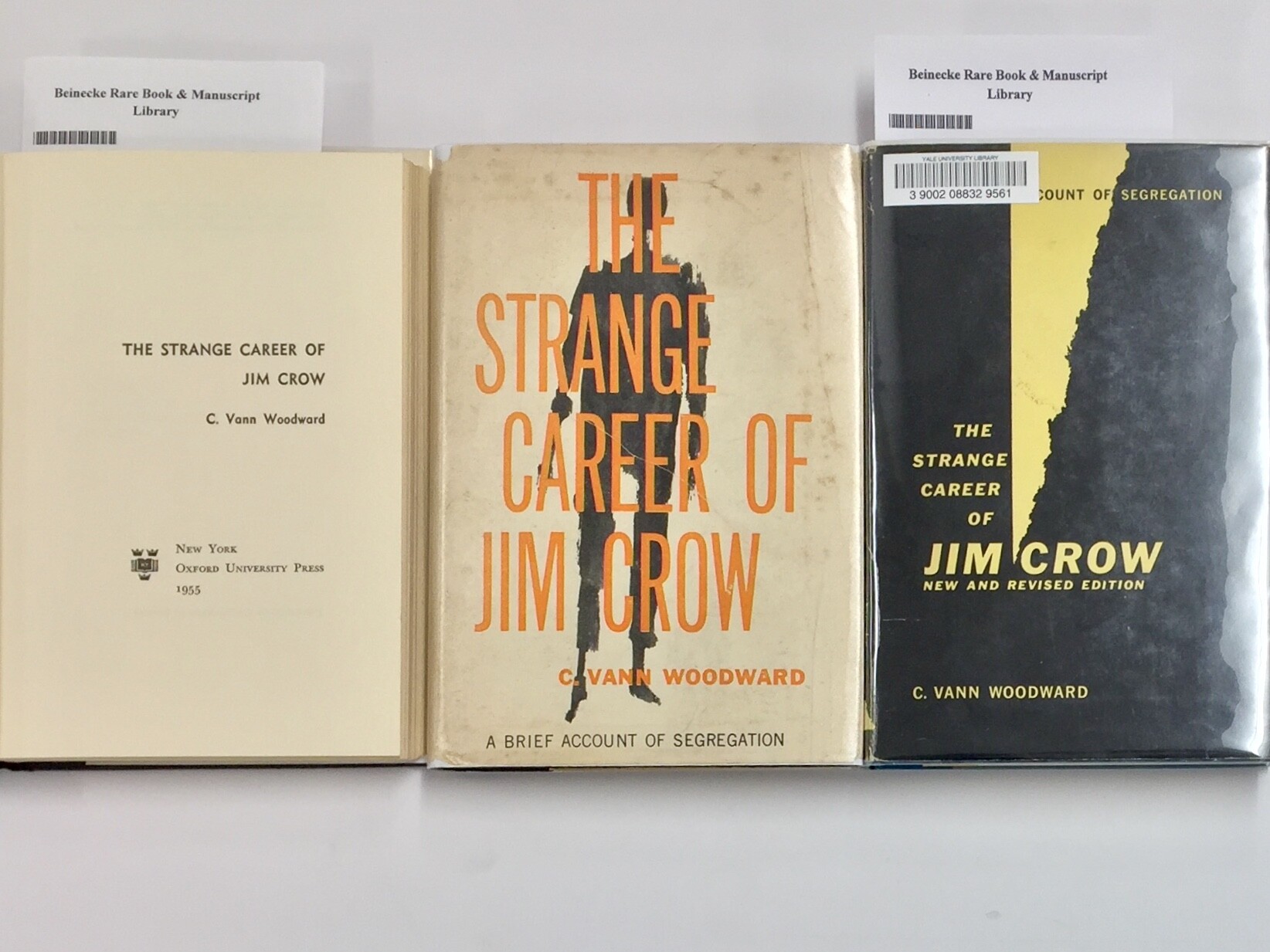 On March 25, 1965, Martin Luther King, Jr. spoke to the largest civil rights demonstration in Southern history: more than 25,000 people at the capitol in Montgomery, Alabama, at the end of a 5-day voting rights march from Selma. King’s analysis of the roots of racial segregation drew on C. Vann Woodward’s The Strange Career of Jim Crow, first published by Oxford University Press in 1955. Woodward joined the Yale faculty in 1961. He was in Montgomery that day with other historians organized by John Hope Franklin to support the march.

The Beinecke Library will have the first edition of Woodward’s book, and a revised edition from 1957, on temporary display for the Martin Luther King Holiday on Monday, January 15, 2018, from noon to 4 pm. The C. Vann Woodward Papers (MS 1436) are accessible to researchers in Manuscripts and Archives, Yale University Library.

In his address at the conclusion of the Selma to Montgomery march in 1965, King said:

Racial segregation as a way of life did not come about as a natural result of hatred between the races immediately after the Civil War. There were no laws segregating the races then. And as the noted historian, C. Vann Woodward, in his book, The Strange Career of Jim Crow, clearly points out, the segregation of the races was really a political stratagem employed by the emerging Bourbon interests in the South to keep the southern masses divided and southern labor the cheapest in the land. You see, it was a simple thing to keep the poor white masses working for near-starvation wages in the years that followed the Civil War. Why, if the poor white plantation or mill worker became dissatisfied with his low wages, the plantation or mill owner would merely threaten to fire him and hire former Negro slaves and pay him even less. Thus, the southern wage level was kept almost unbearably low.

Toward the end of the Reconstruction era, something very significant happened. That is what was known as the Populist Movement. The leaders of this movement began awakening the poor white masses and the former Negro slaves to the fact that they were being fleeced by the emerging Bourbon interests. Not only that, but they began uniting the Negro and white masses into a voting bloc that threatened to drive the Bourbon interests from the command posts of political power in the South.

To meet this threat, the southern aristocracy began immediately to engineer this development of a segregated society. I want you to follow me through here because this is very important to see the roots of racism and the denial of the right to vote. Through their control of mass media, they revised the doctrine of white supremacy. They saturated the thinking of the poor white masses with it, thus clouding their minds to the real issue involved in the Populist Movement. They then directed the placement on the books of the South of laws that made it a crime for Negroes and whites to come together as equals at any level. And that did it. That crippled and eventually destroyed the Populist Movement of the nineteenth century.

If it may be said of the slavery era that the white man took the world and gave the Negro Jesus, then it may be said of the Reconstruction era that the southern aristocracy took the world and gave the poor white man Jim Crow. He gave him Jim Crow. And when his wrinkled stomach cried out for the food that his empty pockets could not provide, he ate Jim Crow, a psychological bird that told him that no matter how bad off he was, at least he was a white man, better than the black man. And he ate Jim Crow. And when his undernourished children cried out for the necessities that his low wages could not provide, he showed them the Jim Crow signs on the buses and in the stores, on the streets and in the public buildings. And his children, too, learned to feed upon Jim Crow, their last outpost of psychological oblivion. (“Address at the Conclusion of the Selma to Montgomery March,” accessed at http://kingencyclopedia.stanford.edu/encyclopedia/documentsentry/doc_address_at_the_conclusion_of_selma_march/index.html)