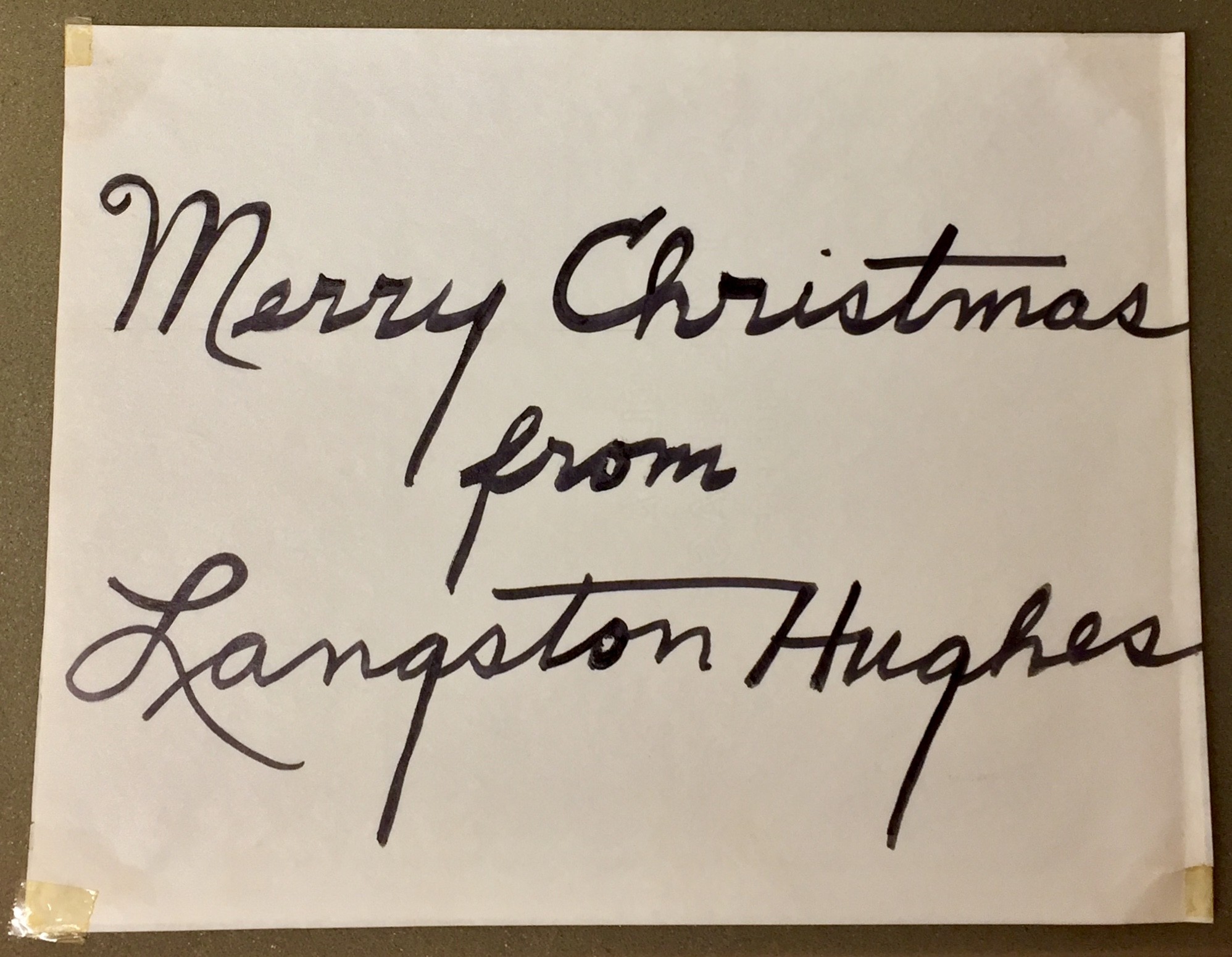 What’s a poet with a large circle of friends, rich in words if limited in financial resources, to do when checking the names off his holiday list? For Langston Hughes, during the holiday season of 1950, the answer was to share some of his wit in homemade Christmas postcards.

In one, Hughes wrote:

IF TIMES WERE NOT SO DOGGONE HARD

BUT SINCE I’M BROKE AS CAN BE,

The draft typescript for this and other cards in a set of Christmas greetings are among the extensive Langston Hughes Papers in the Beinecke Rare Book and Manuscript Library. The Hughes archives were given to Yale University by the renowned writer beginning in 1941, continuing throughout his lifetime, and including more materials from his estate upon his death in 1967.

The 1950 Hughes holiday cards are all on view in a special pop-up holiday display on the Beinecke Library’s mezzanine in temporary exhibition cases from Friday, December 8, through Wednesday, December 20.

The cards provide a window on the state of the legendary author’s career and challenges in 1950. According to Arnold Rampersad in his magisterial two volume biography, The Life of Langston Hughes (Oxford University Press, 1988), “The last weeks of 1950 found him nevertheless in a melancholy mood, his spirits sinking lower again as he again became a target of red-baiting.”

Hughes was living at 20 East 127th Street, in thrifty comfort in the home of Toy and Emerson Harper, who were as an adoptive family to him from the 1920s onward. As Rampersad notes, Hughes’ career was at a difficult moment, with the opera he wrote the libretto for, The Barrier, a commercial and critical failure, and his book Simple Speaks His Mind not the bestseller he hoped (although critics appreciated it). Hughes was working on a book and another opera, but both projects had begun to bore him, and he was low on cash.

Hughes was not, however, low on good wishes for his friends. As one of the postcards declares:

BUT NOT IN WISHING

The Beinecke Library pop-up holiday display also includes a companion set of Christmas cards Hughes received from his friends in the early 1950s, as well as a holiday cards produced by the Race Relations Department of the American Missionary Association with lines from his poem, “I Dream a World.” The selections for the display were made by Beinecke student interns Mariah Kreutter ’20 and Ryan Seffinger ’19, together with Michael Morand, the library’s communications director.

Many of the cards sent to and kept by Hughes that are on display are, themselves, handcrafted greetings. The works displayed include:

-       A 1951 illustrated booklet titled “A Christmas Message in Pictures,” produced by he Boston Department of Social Service, with illustrations by artist Allan Rohan Crite depicting the nativity, including dark-skinned representations of Jesus, Mary and Joseph.

-       A 1950 card from Russell and Rowena Jelliffe, founders of Cleveland’s Karamu House, the oldest African American theater in the United States and a frequent producer of Hughes’ plays. The card features a block printed design of an African mask.

-       A 1944 anti-fascist card from William and Louise Patterson, prominent intellectuals and activists whose work included collaborations with Hughes on theater and film projects, featuring humorous images of their daughter Mary Lou.

-       A 1951 printed card featuring a handwritten message from Charlemae Rollins, a pioneering children’s librarian at the Chicago Public Library who worked to provide children’s books that accurately portrayed black humanity.

These cards from his friends are drawn from a total of 17 boxes with numerous holiday cards that Hughes received from 1935 to 1966, all of which he donated as part of his overall papers. Together with numerous other boxes of correspondence, the cards demonstrate the breadth, depth, and strength of Hughes’ friendships and artistic collaborations.

His archive in total comprises 305 linear feet of archives in 671 boxes, plus 11 broadside folders and art storage. The Langston Hughes Papers are among the most consulted collections by readers in the Beinecke Library’s reading room, faculty and students in the library’s classrooms, and visitors online in the Beinecke’s digital library. They are part of the James Weldon Johnson Memorial Collection of African American Art and Letters in the Yale Collection of American Literature (YCAL) at the Beinecke Library.

“Langston Hughes was, in so many ways, a man for all seasons,” notes Melissa Barton, co-curator of YCAL. “He was a poet, witness, and prophet for his own times. His voice and work resonate across the decades down unto today, with his line, ‘I, too, am America,’ engraved in the National Museum of American History and Culture on the National Mall in Washington, D.C.”

“We hope many of our neighbors will take a moment this holiday season to come and see some thoughts Langston Hughes shared with his friends as a Christmas gift in 1950,” Barton says. “Happily, as Hughes would surely appreciate, visiting the Beinecke Library is always free for all.”