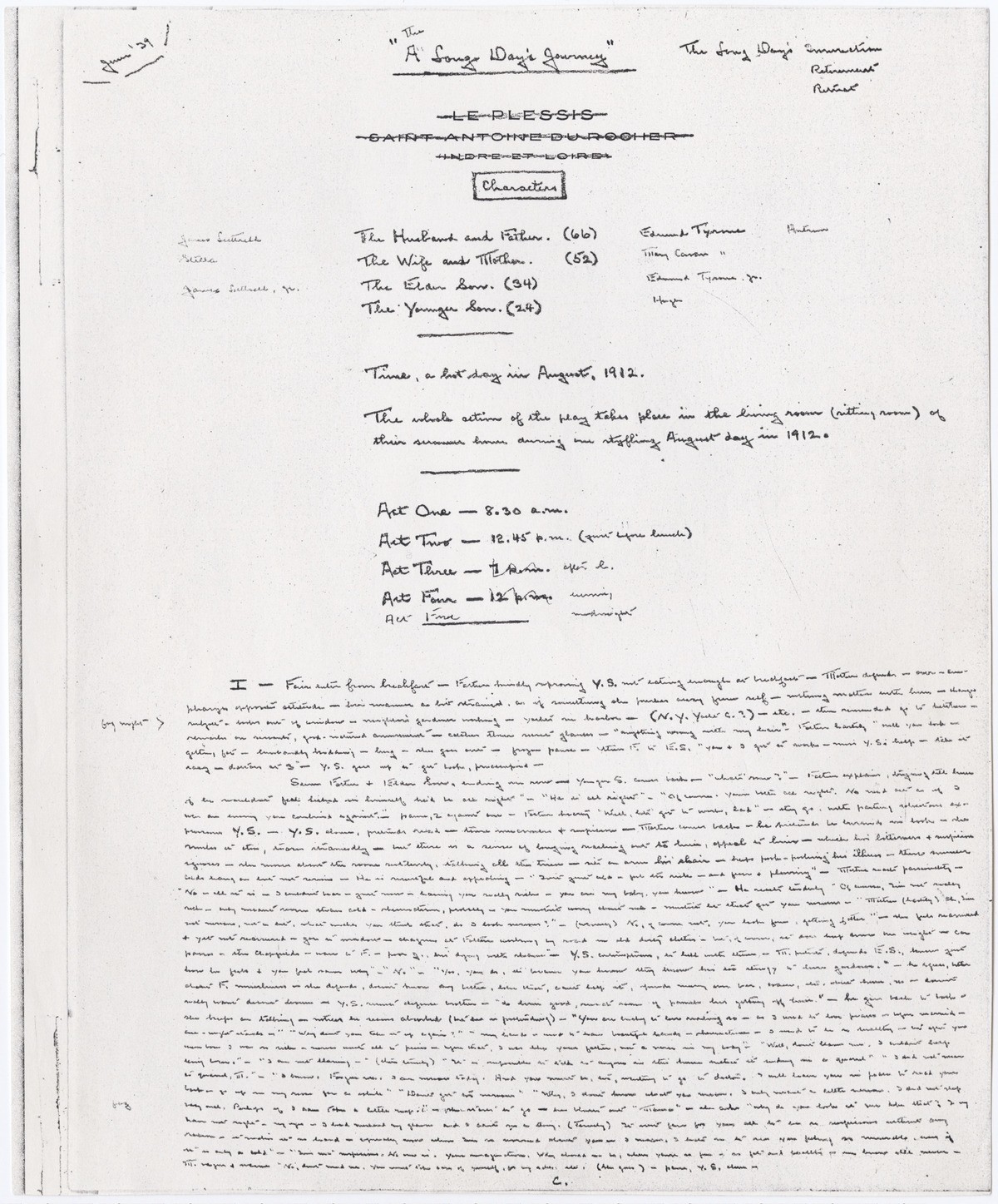 From YaleNews, by Susan Gonzalez:

Readers of Eugene O’Neill’s “Long Day’s Journey into Night” — considered to be the playwright’s masterpiece — can now experience the play in ways never before possible via a newly released multimedia edition by Yale University Press.

The interactive e-book — edited by Yale alumnus William Davies King and believed to be a first-ever multimedia edition of a play — features dozens of photographs, critical essays, notes, videotaped clips of the work in performance or rehearsal, audio recordings of the playwright reading key scenes, and even tours of two important homes in the playwright’s life: Monte Cristo Cottage in New London, Connecticut, O’Neill’s boyhood summer home where “Long Day’s Journey into Night” is set, and Tao House in Danville, California, where he wrote the play. The e-book aims to help readers understand and delve more deeply into the American classic and its historical context.

O’Neill completed the semi-autobiographical play in 1942 but instructed that it not be published until 25 years after his death. He also stipulated that the play never be performed. However, his third wife, Carlotta Monterey O’Neill, transferred the rights of “Long Day’s Journey into Night” to Yale, which also houses an extensive collection of papers, photographs, original manuscripts, and other items related to O’Neill in its Beinecke Rare Book & Manuscripts Library. Yale University Press first published the play in 1956, three years after O’Neill’s death, and “Long Day’s Journey into Night” — now in its 99th printing — remains its best-selling book.

The four-act “Long Day’s Journey into Night” portrays one day in the life of the dysfunctional Irish-American Tyrone family on a summer’s day in 1912 at their cottage in New London. The four are bent on confronting each other’s secrets and pasts while concealing their own: Mary Tyrone is a morphine addict; her aging actor husband James and their two sons, Jamie and Edmund (whom O’Neill based on himself), are alcoholics. Conflict between the family members — and their individual and collective despair — intensifies as the day goes on, culminating in a wrenching final scene.

O’Neill dedicated the autobiographical work to Carlotta in honor of their 12th wedding anniversary, describing it in his dedication as a “play of old sorrow, written in tears and blood.” He wrote it, he said, “with deep pity and understanding and forgiveness for all the four haunted Tyrones.”

King, who also edited the Yale University Press’ 2014 critical edition of “Long Day’s Journey into Night,” is a 1977 Yale College graduate who earned his M.F.A. and D.F.A. from Yale School of Drama in 1981 and 1983, respectively. Now a professor of dramatic art at the University of California-Santa Barbara and an O’Neill scholar, he fell in love with the work as a 14-year-old student at Andover.

“[I]t changed my life,” says King of the work. “I became obsessed with O’Neill and read all his plays and everything I could get my hands on before I got to Yale three years later. The play touched me because it told me that one could make art — something beautiful and moving and worth sharing — out of the painful circumstances within one’s family. My family circumstances were not as dire as O’Neill’s, but I saw in him a guide to find meaning in pain, and then, once I got to know more of his work, I was inspired by his relentless experimentalism and disdain for selling out.”

King said that while he considered it a “stroke of destiny” that Yale Press invited him to put together the 2014 critical edition of “Long Day’s Journey into Night,” he was at first “leery” about taking on that project.

“O’Neill and his widow, Carlotta Monterey O’Neill, made it clear that the play should be published with only his inscription of the play to her, no other framing,” King explains. “And to a large extent, the play has remained sacrosanct in its stand-alone Yale edition. It’s not in anthologies; it’s not footnoted and glossed like every Shakespeare play; and when it is staged, directors are held to the play as O’Neill wrote it.”

However, he said he was willing to go even a step further — putting together a multimedia edition — because he thought it would help readers, including his own students, better understand the work, for which O’Neill won a posthumous Pulitzer Prize for Drama in 1957.

“[S]ixty years have passed since the play was published, and the very nature of the book has in many ways shifted,” King explains. “In my teaching of the play, I have seen students moved by the play as deeply as I was when a teenager, but they often demonstrate that they need help understanding the play’s references and language and the depth of its historical and autobiographical dimensions. The critical edition attempted to create an interpretative frame around the play without telling students what to think about it. The step from that sort of framing to the multimedia edition was logical and timely, given that students and general readers are more inclined to read from digitized media than from books, and the intersection of pictorial and hypertextual and performative material with the literary text does not seem to them a violation, as (I will admit) it seemed to me initially.”

The multimedia edition of “Long Day’s Journey into Night” draws heavily on materials from the Beinecke Library’s Eugene O’Neill Papers and Eugene O’Neill Collection, as well as from smaller related collections, such as the Agnes Boulton Collection of materials that were purchased from O’Neill’s second wife and her estate.

“The O’Neill collections at Beinecke Library are without question the foremost source of insight into his life and career,” says King, who is also editor of the Eugene O’Neill Review. “I was able to include the biggest set of O’Neill notes and stage scenarios and manuscripts and letters and diary entries [related to the play] — material to enable even full-fledged scholars to do fairly deep research. At the same time, we could include large clips showing actors performing the play and O’Neill himself reading some of its characters’ speeches. That sort of material might be especially helpful to a student who needs help imagining the life of this play beyond its many words.”

Available for Kindle, Nook, and iPad platforms, among others, the e-book is set up so that readers can take notes in it, extract quotations, and search terms, according to King. “At the center, always, is O’Neill’s great play, but you can shoot out from it in multiple directions,” he says.

Melissa Barton, curator of prose and drama for the Yale Collection of American Literature at the Beinecke, oversees the library’s O’Neill collections. She says that during library tours she leads each fall for new students at the School of Drama, the students are especially excited to see O’Neill’s manuscript for “Long Day’s Journey into Night,” which he wrote in near-microscopic handwriting. She believes that students and other readers will enjoy exploring manuscripts and other O’Neill treasures in the e-book.

“The multimedia edition of ‘Long Day’s Journey into Night’ is thrilling … I will never think of this play the same way again,” said School of Drama dean and artistic director of the Yale Repertory Theatre, James Bundy. “How fitting that one of the greatest of all American plays should give rise to this brilliant and generous work, which sets an entirely new standard for publishing in drama.”

Play scenes are from a 2015 production of “Long Day’s Journey into Night” by the Oregon Shakespeare Festival. The e-book also features scenes of professional actors — all alumni of Yale School of Drama — rehearsing the play and discussing how to perform specific scenes under the direction of Joe Grifasi, a 1975 graduate of Yale School of Drama. The Yale actors are two-time Tony Award winner James Naughton DRA ’70 (as James), Lizbeth MacKay DRA ’75, (as Mary), Brian Hastert DRA ’09 (as Jamie), and Daniel Reece DRA ’14 (as Edmund).

“The people of Yale University Press, led by Sarah Miller [editor for literature, language, and the performing arts], provided expert support in bringing this edition to its maximum potential,” King says. “It was a fascinating process because we were together trying to figure out how a book like this might work. There was no model. It had to be conceptualized and realized from scratch, and I give a lot of credit to the work and expertise they brought to it.”

The e-book was released just as “Long Day’s Journey into Night” is being reprised on Broadway by the Roundabout Theater Company, featuring Jessica Lange in the role of Mary Tyrone and Gabriel Byrne in the role of James. Lange, who previously performed in the same role in a 2000 production of the play in London, wrote the forward to the e-book, in which she says, “No part I have ever played on stage or in film has ever captured me more.”

O’Neill received an honorary degree from Yale in 1926. He had studied as a special student at Harvard University with George Pierce Baker, who became first chair of the Yale School of Drama. His son, Eugene O’Neill Jr., earned a B.A. from Yale College in 1932 and Ph.D. degree from the university in 1936. A professor of Greek literature, he committed suicide at age 40.

Royalties from the sale of “Long Day’s Journey into Night” fund scholarships for students at the School of Drama and support the university’s O’Neill Playwriting Program, which brings School of Drama playwrights and Yale College students into theater and creative classes at New Haven’s Cooperative Arts and Humanities High School to lead playwriting sessions. The Yale undergraduates and high school students then develop original plays during a retreat at the Eugene O’Neill Theater Center in Waterford, Connecticut, and School of Drama mentors later stage the fully formed plays at the Yale Cabaret.

King is currently working on a critical edition of O’Neill’s “The Iceman Cometh.” He says that he now looks back on one episode from his Yale undergraduate days with some embarrassment: As a freshman in 1973, he wrote a letter to the Yale Daily News chastising the university for not acknowledging O’Neill’s 85th birthday.

“It’s possible that O’Neill himself might snarl at me for putting hypertextual links in his play, but on the whole he would have to recognize that the university and Yale University Press have done him a great service,” says King.

Watch the promotional trailer for the multimedia edition of “Long Day’s Journey into Night.”