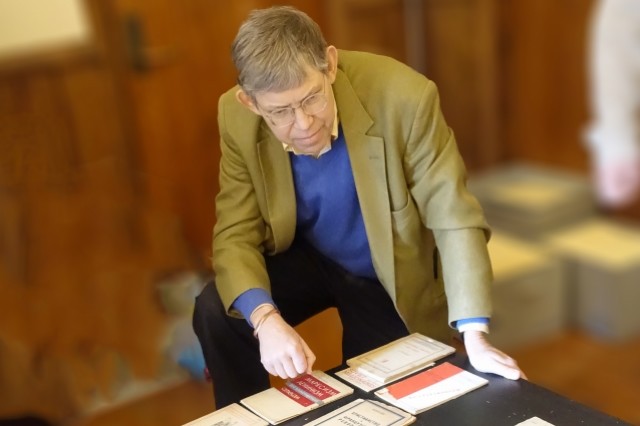 The Beinecke Rare Book & Manuscript Library mourns the death of William Reese ’77, an extraordinary friend and collaborator with the library for more than four decades as a bookseller, collector, advisor, and supporter.

He established the William Reese Company in New Haven as one of the world’s preeminent antiquarian booksellers and from his time as a student in Yale College had an unparalleled engagement with the life of Yale University Library. “Bill was among the most knowledgeable, generous, and longstanding friends Yale’s libraries have ever had, and his loss is inestimable,” University Librarian Susan Gibbons wrote on his death on June 4, 2018.

As an undergraduate, he worked with Archibald Hanna, the Beinecke Library’s first curator of Western Americana, to identify books in the open stacks in Sterling Memorial Library that best were housed in the Beinecke Library. Famously, in what was perhaps his first act as a bookseller, while a sophomore at Yale he found a rare sixteenth-century map from Mexico in a furniture sale and placed the winning bid for it in 1974.  Shortly thereafter, he presented his find to Hanna and Beinecke Library Director Louis Martz and offered it for sale to the library – with a price equal to the remainder of his Yale tuition. The library agreed and the map, known as the Codex Reese, hangs prominently in the Beinecke Library’s largest classroom as an inspiration to ongoing generations of students and scholars.

“There has not been a moment since his own undergraduate days when Bill Reese has not been involved in the work of the Beinecke Library,” said Director Edwin C. Schroeder. “As a Yale College student, he twice won the Adrian Van Sinderen Book Collecting Prize, a program he would go on to serve as selection committee chair through to now. Over the years, he co-curated four major public exhibitions in the library, created four research fellowships, and donated hundreds of books and manuscripts, including significant collections of Robert Graves and of Siegfried Sassoon – and those are just a few of his contributions to the Beinecke Library, not to mention his support throughout the Yale University Library and other parts of the campus.”

Reese was always ready with advice for the library’s directors and curators and represented the Beinecke Library at auction. “Bill would encourage us to be more aggressive when necessary – and he was not shy about telling us when we were crazy or misguided!” according to Schroeder. “Time after time, things worked out according to an abiding formula: follow Bill’s advice and you come out the winner.”

His ongoing engagement and support for the Yale Collection of Western Americana was among Reese’s most outstanding passions. When George Miles succeeded Archibald Hanna as curator of the collection in 1981, Reese was named as advisor to the curator. “I was a wet-behind-the-ears academic with no experience in the rare book and manuscript trade,” Miles recalls, “but Bill’s advice and patient encouragement showed me a path to maintain the extraordinary tradition that Archie Hanna had established. As our mutual friend Martha Sandweiss observed, ‘Bill has a prodigious brain.’

“Visiting the Reese Company at 409 Temple Street to discuss his newest acquisitions was like dropping in on an advanced seminar in American cultural history. As much as Bill knew, he graciously shared, but what I came to appreciate even more than Bill’s knowledge was his insatiable curiosity. There was nothing quaint or musty about rare books and manuscripts for Bill; they were pathways to fresh insights.

“Time and again, the Western Americana Collection benefited from his eagerness to explore poorly documented aspects of western history from German colonization in the Republic of Texas and the complexities of urban life in the 19h century West to 20thcentury utopian communities and the experiences of Japanese-Americans interned during World War II. I couldn’t have had a better guide or colleague.”

Schroeder reflected, “Few people have had the impact on special collections at Yale that Bill Reese had – an impact that is tangible not only in the physical collections, but also alive and real in the spirit of generosity and accessibility he brought to everything he did.

“Bill’s optimism and hope were there right until the end.  When I had lunch with him recently, we were discussing a possible conference for spring 2019, and we both assumed that he would play an important role. Alas that won’t be the case, but one thing is certain: Bill Reese’s legacy will endure throughout the Beinecke Library and beyond.”

The Beinecke Library is grateful for all that Bill Reese meant to this library and all that he did with it. The library extends its deepest condolences to his beloved wife, Dorothy, and his entire family.

You can watch a video of the Celebration of Life for William S. Reese held at Yale University on September 16, 2018, on the Yale University YouTube channel here: https://youtu.be/nUp0OFdk2Yg