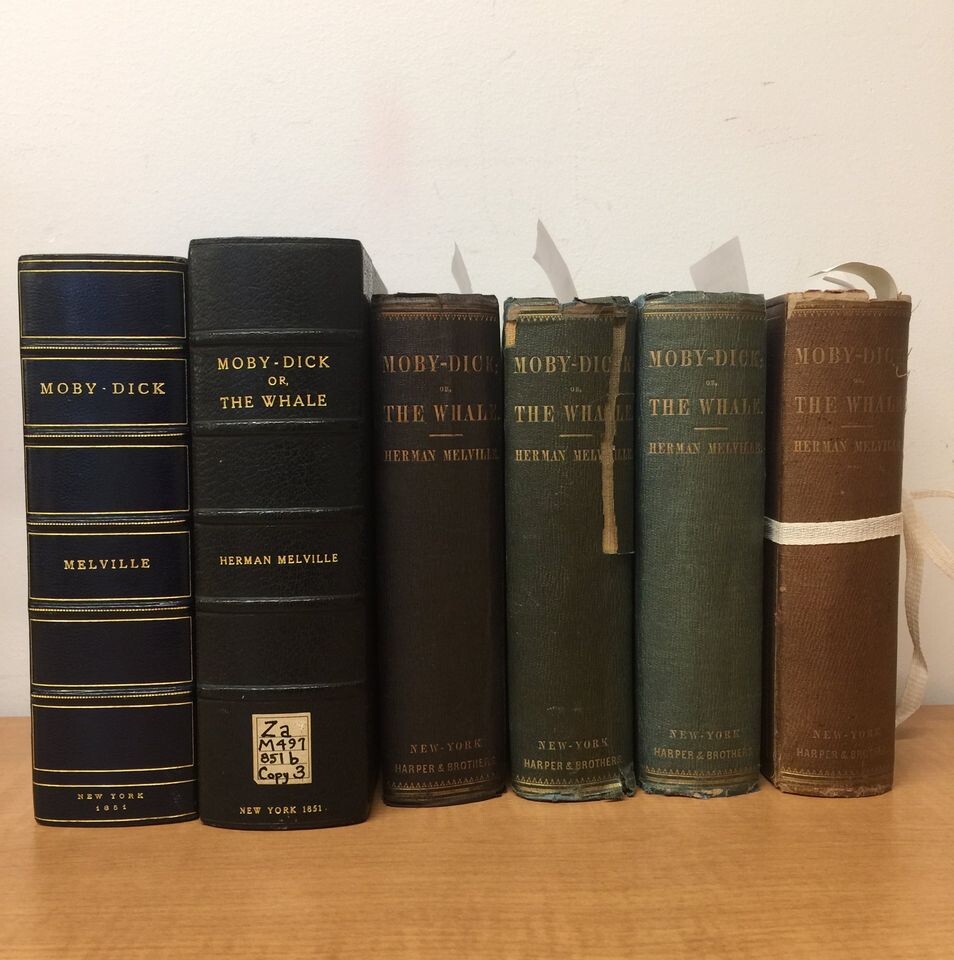 Herman Melville’s novel Moby Dick has an unusual and compelling publishing history. Books and other materials in the Beinecke Library related to Melville’s work offer opportunities to consider the publication and reception of this exceptional work and to explore aspects of 19th century American print culture.

In order to secure Melville’s copyright in the US and in Great Britain, Moby Dick was published almost simultaneously in both places. The novel was published in London by Richard Bentley on October 18, 1851, and then in the US, by Harper and Brothers, on November 14, 1851.

Though less than a month separated the two publication dates, there are roughly 600 substantive differences between the two texts; the British edition is some 2000 words shorter than the US publication.There is little hard evidence about how and why the many changes between the two editions were made.

Melville had printing plates set in the US in July of 1851, even before he had found a publisher. This means that he couldn’t revise or correct the text before it’s US publication. But he likely edited the pages before he sent them to Bentley in London months later. Bentley, too, may have had the text edited; many believe, in fact, that he had several passages cut that were deemed likely to offend British readers. Errors and word substitutions may also have been made when the novel was typeset by the UK printer.

Though many of the changes are minor–“covertly” for “correctly” and “death-grasp” for “death gasp”–some are significant. For example, among many deletions of political content, chapter 25 is left out of the UK edition entierly. Still more critical: the all-important epilogue does not appear in the UK edition. This deletion, possibly a printing error, may especially have informed the novel’s poor reception among British reviewers and readers.

A detailed account of the publication of the first editions of Moby Dick appears in Moby-Dick, or, The Whale by Herman Melville; Edited, with Historical Note, by Harrison Hayford, Hershel Parker, G. Thomas Tanselle, published by Northwestern University Press & the Newberry Library, 1988. ORBIS Record 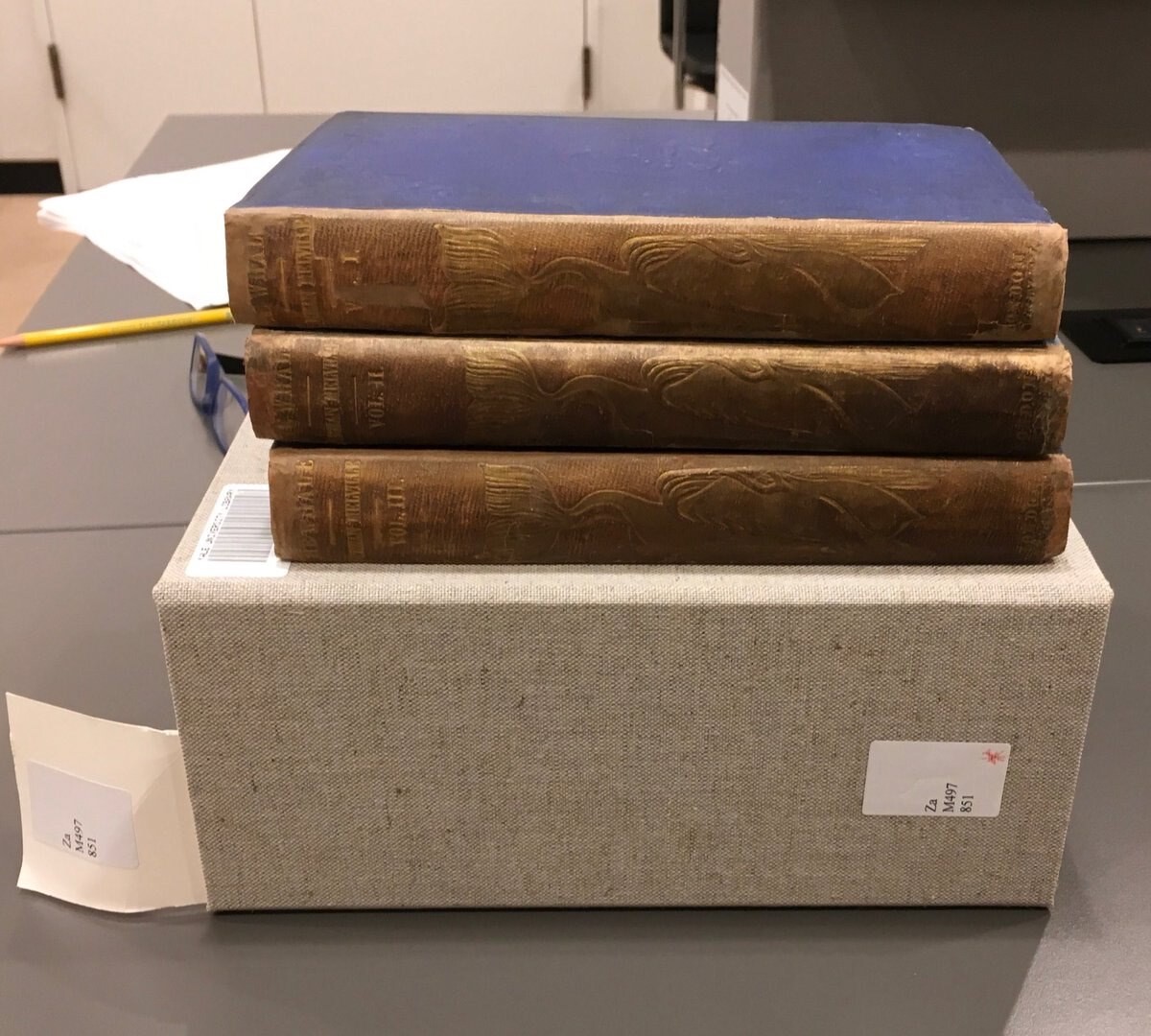 The British first edition, titled The Whale, was printed as a three volume “triple decker” in an edition of 500 copies. The gilt binding was illustrated with a diving whale.

The “Extracts Supplied by a Sub-Sub-Librarian” that appear at the beginning of the US edition here appear at the end of volume three. 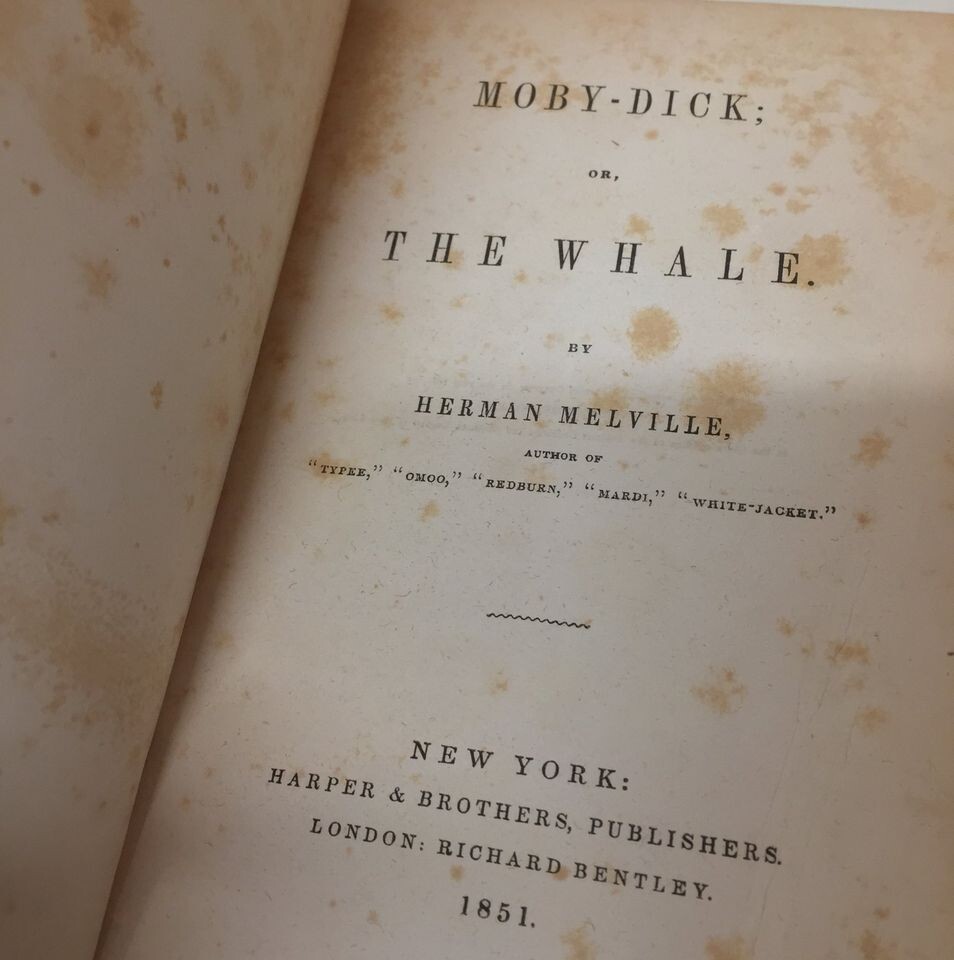 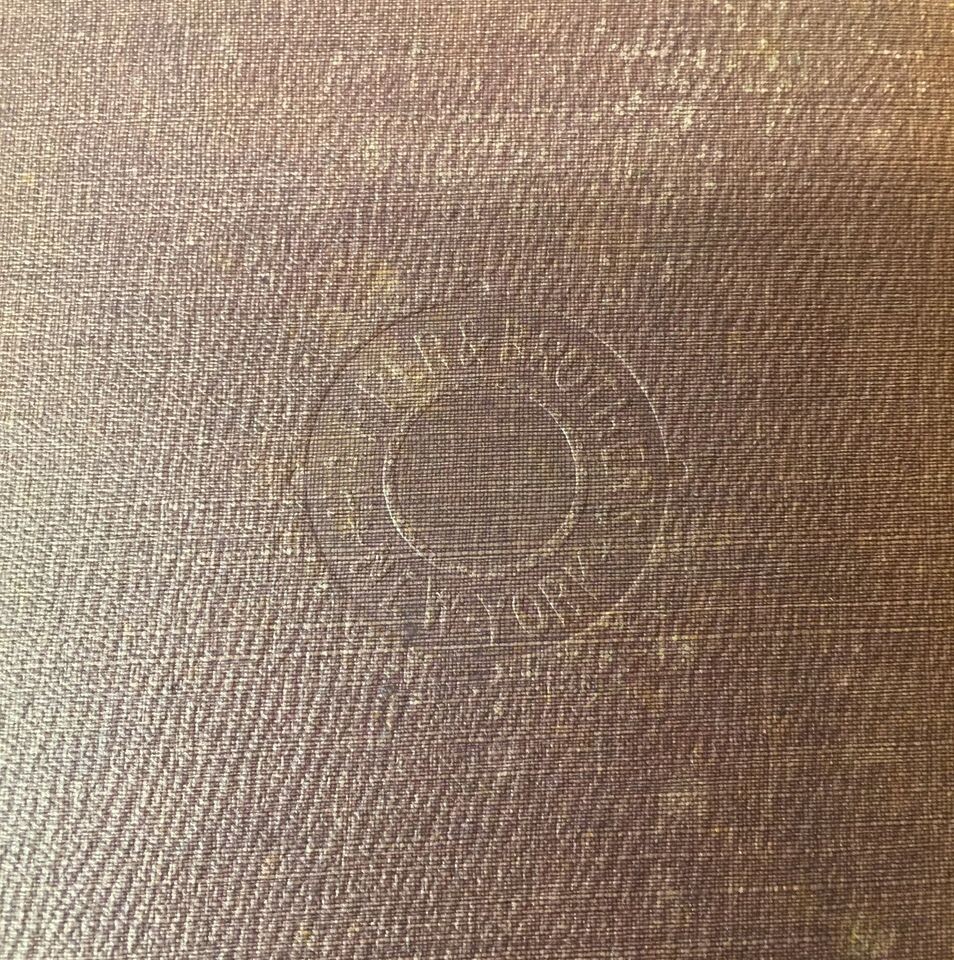 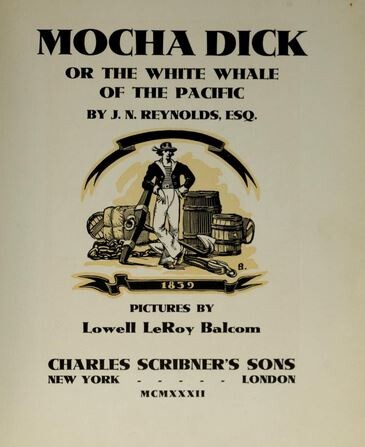 The Beinecke Library collections include copies of accounts of whaling and of whaling shipwrecks that were among Melville’s research materials:

Narrative of the Most Extraordinary and Distressing Shipwreck of the Whale-Ship Essex by Owen Chase, 1821
ORBIS Record
FULL TEXT (Yale VPN Required)

“Mocha Dick, or the White Whale of the Pacific,” by J.N. Reynolds, originally published in Knickerbocker magazine 1839
ORBIS Record 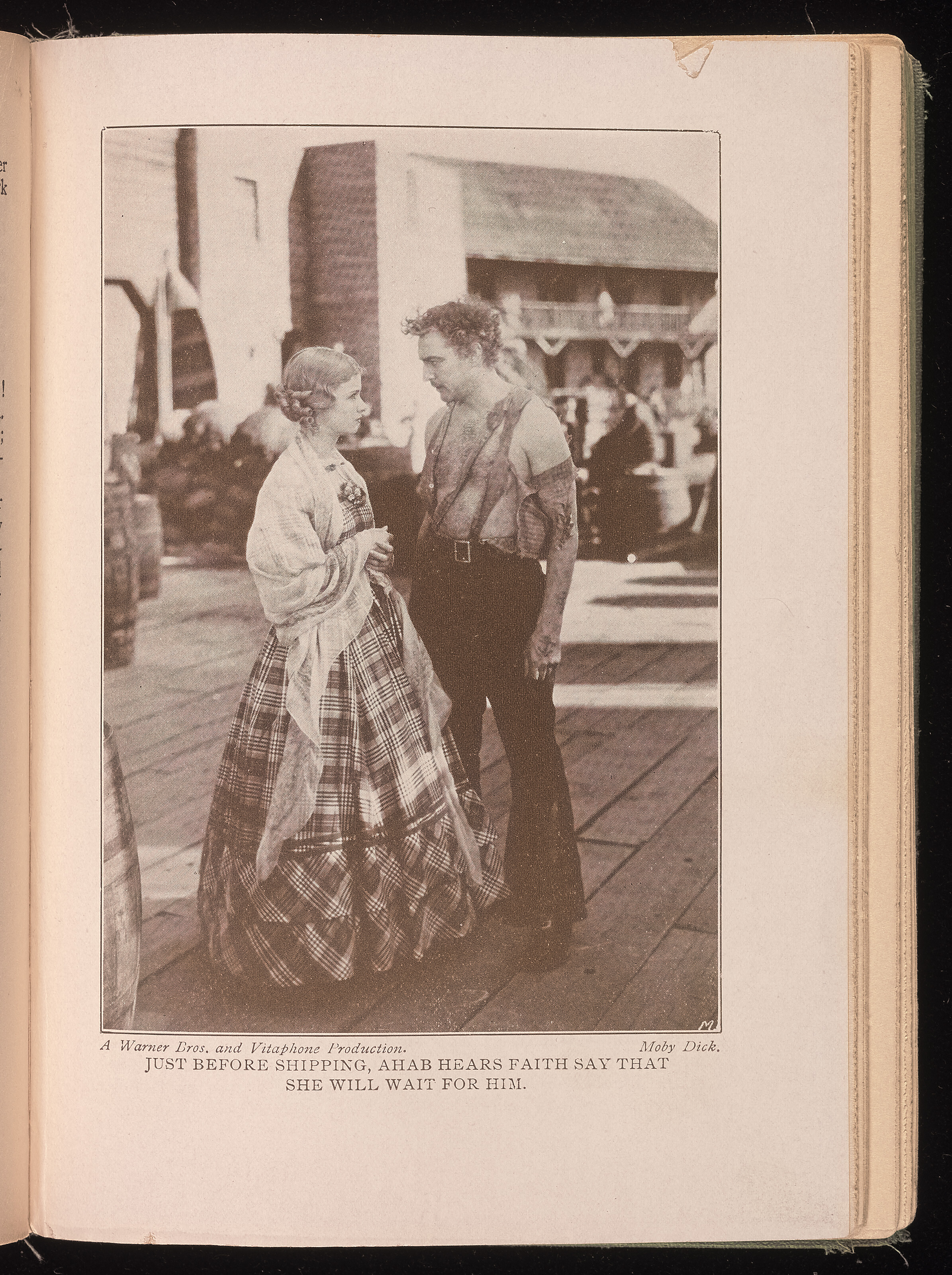 Moby Dick  was not a critical or popular success in Melville’s lifetime; the book was decades out of print by the turn of the twentieth century.

Before long, the novel was an undisputed “classic” of American literature. It appeared in new editions, adaptations, and abridgements. Illustrated version celebrated the adventures of life at sea; films revised and reimagined the story for the screen; inexpensive and abridged versions circulated widely; and expensive artists books underscored Moby Dick’s cultural significance.

One of the most successful films of 1925 was a “talking picture” called The Sea Beast (image above), derived from Moby Dick but including plot lines and characters that do not appear in the novel. Teleplay editions–illustrated with film stills–were published to accompany the film.

In the early 20th century, many editions of Moby Dick promoted the novel as a tale of adventure, a story of men sailing the high seas. These editions, some of which were abridged to something less daunting the novel’s full length, were often illustrated with drawings of whale hunts and camaraderie among sailors on the decks of the Pequod. As Moby Dick came to be viewed as a great work of American literature, it started to appear in expensive editions geared toward collectors of rare and finely made books.  The most famous of the collectors’ editions was published in 1930 by Chicago’s Lakeside Press and illustrated by Rockwell Kent. The Lakeside edition is legendary in rare book circles for its beautiful and grand production. Printed in three oversized and heavily illustrated volumes, the books were issued in a custom-made aluminum slipcase. The edition in its slipcase is sometimes jokingly referred to as “the fish in the can.” Later reprinted in more affordable editions, Kent’s illustrations are among the most well-know representations of the novel.

Moby Dick: or, The Whale, by Herman Melville; with an introduction by Clifton Fadiman and illustrations by Boardman Robinson, [New York] : Limited Editions Club, 1943.
ORBIS Record
IMAGES in the Beinecke’s Digital Library

Moby Dick came to be considered a “classic” American novel, an exemplary artistic achievement worthy of the widest possible readership. To reach a diverse group of readers, the novel appeared in various easily accessible editions including inexpensive paperback abridgements and “classic” comics.

Moby Dick, or, The White Whale, by Herman Melville: an abridged edition; edited and with an introduction by Maxwell Geismar, New York: Pocket Books, 1949.
ORBIS Record