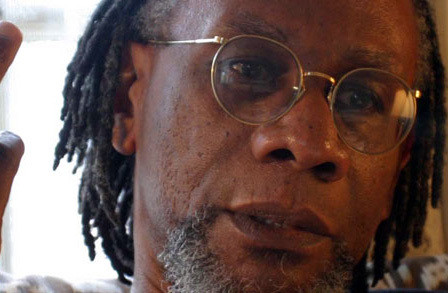 Nathaniel Mackey has been named the winner of Yale’s 2015 Bollingen Prize for American Poetry, joining a list of past winners that includes such luminaries as Ezra Pound, Wallace Stevens, E.E. Cummings, and Marianne Moore.

“I’m thrilled to learn that I’ve been awarded the Bollingen Prize,” Mackey says. “Joining so distinguished a group of recipients makes it especially moving. I’m deeply honored by the recognition and endorsement the award represents.”

Of Mackey’s work, the three-member judging committee said: “Nathaniel Mackey’s decades-long serial work—Songs of the Andoumboulou and Mu—constitutes one of the most important poetic achievements of our time. Outer Pradesh (2014)—jazz-inflected, outward-riding, passionately smart, open, and wise—beautifully continues this ongoing project.”

Mackey has authored numerous books of poetry, including the National Book Award-winning Splay Anthem (2006), Nod House (2011), Whatsaid Serif (1998), and Eroding Witness (1985), which was chosen for the National Poetry Series. His most recent book, Outer Pradesh, was published in 2014. Additionally, Mackey has published four book-length volumes from his ongoing prose work, From a Broken Bottle Traces of Perfume Still Emanate, including Bedouin Hornbook and Bass Cathedral.

Mackey was the 2014 recipient of the Ruth Lilly Poetry Prize, an annual award that honors a living U.S. poet for outstanding lifetime achievement. Among other honors, he has received the Whiting Writer’s Award, the Stephen Henderson Award from the African American Literature and Culture Society, and a 2010 Guggenheim Fellowship. He served as a chancellor of the Academy of American Poets from 2001 to 2007. Mackey is the Reynolds Price Professor of Creative Writing at Duke University.

Of Outer Pradesh the judges said: “The book’s epigraph is Jean Toomer’s assertion of modernist open-endedness and generic not-belonging: ‘There is no end to ‘out.’’ Mackey applies this endlessly outward-going passage to an ecstatic, exilic experience, as a group of travelers—a ‘philosophical posse’—makes its way across an Indian province. What they and we encounter on this journey is a pre-history embodied by ‘old-time people’ whose songs must be heard. Together we find ourselves within an improvised social continuum that grows larger, stranger, more remote, and more consoling at every turn. Memory becomes a site of social commentary and collective vision. Mackey’s epic of fugitivity forms a stunning meditation on being.”

The Bollingen Prize in American Poetry, established by Paul Mellon in 1948, is awarded biennially by the Yale University Library to an American poet for the best book published during the previous two years or for lifetime achievement in poetry. From its controversial beginnings in 1948, when the Fellows in American Letters of the Library of Congress awarded the prize to Ezra Pound for The Pisan Cantos, the Bollingen Prize has honored the literary accomplishments of poets whose work continues to define modern American literature. The prize, administered by Yale’s Beinecke Rare Book & Manuscript Library, includes a cash award of $150,000.

Al Filreis is Kelly Professor of English at the University of Pennsylvania, faculty director of the Kelly Writers House, director of the Center for Programs in Contemporary Writing, co-director of PennSound, and publisher of Jacket2—all at the University of Pennsylvania. Among his books are Secretaries of the Moon, Wallace Stevens & the Actual World, Modernism from Right to Left, and Counter- Revolution of the Word. He has taught a massive open online course, “ModPo,” to 118,000 people worldwide in the last three years.

Tracy K. Smith is a professor of creative writing at Princeton University, and the author of three books of poetry: The Body’s Question (2003), which won the Cave Canem prize for the best first book by an African-American poet; Duende (2007), winner of the James Laughlin Award and the Essense Literary Award; and Life on Mars (2011), which won the 2012 Pulitzer Prize for Poetry. Her memoir, Ordinary Light, will be published this spring.

Elizabeth Willis’s most recent book, Address (2011), won the PEN New England / L. L. Winship Prize for Poetry. Her other books of poetry include Meteoric Flowers (2006); Turneresque (2003); The Human Abstract (1995), which was selected for the National Poetry Series; and Second Law (1993). Her Selected Poems is forthcoming in 2015. Willis has been awarded fellowships from the Guggenheim Foundation, the California Arts Council, and the Howard Foundation. She is the Shapiro-Silverberg Professor of Creative Writing at Wesleyan University.

From Outer Pradesh by Nathaniel Mackey

As with the old-time people, the
word their one rescue, words
would be our rescue we’d been
told. Believing so braced us,
book
of the book’s advantage, book of
the word’s leverage, lift…
Al-
beit words were our one rescue
they were those Night Choir
sang. No way could we be free
of apprehension… But in the
state
known as fretless his and her
heads flew, Nunca and Anuncio
thumbing the book of not, not
that what would be would have to
do
with them, not that they were there
though
they were