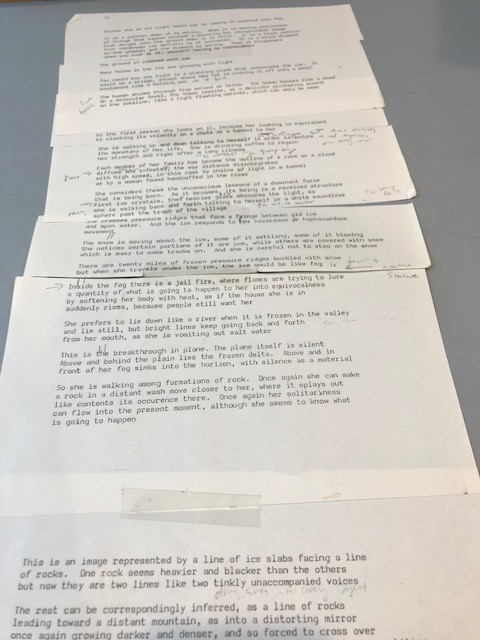 The Beinecke is excited to announce the acquisition of a new collection: the papers of contemporary poet Mei-mei Berssenbrugge. The collection spans Berssenbrugge’s career up to 2015 and includes her correspondence, writings, photographs, teaching materials, and personal papers. It is available for research under the call number YCAL MSS 1082.

Berssenbrugge was born in Beijing in 1947, to a Chinese mother and an American father. The family moved to the United States when she was very young, and Berssenbrugge grew up in Massachusetts. She earned a BA from Reed College, and an MFA from Columbia University in 1973. Since then she has lived and worked mainly in New Mexico and New York. She has taught at the Institute of American Indian Art in Santa Fe, at Brown University, and in New York City. Associated with both the New York School of poets and the Language poets, Berssenbrugge has also worked on books in collaboration with New York-based visual artists like Kiki Smith and Richard Tuttle. She has also been a contributing editor of Conjunctions Magazine since 1978.

Berssenbrugge has written many celebrated poetry books including The Heat Bird (1983), Empathy (1989), Four Year Old Girl (1998), and most recently Hello, The Roses (2013). She has received two American Book Awards, two fellowships from the National Endowment for the Arts, and honors from both the Asian American Writers Workshop and the Western States Art Foundation. Her poetry is notable for its long-lined style and shifting range. It mixes the formal and the familiar, the scientific and the humanistic. Berssenbrugge thinks of her poetic work in terms of collage—it often makes use of philosophical concepts, abstract language, and images from the New Mexico Landscape.

The collection now housed in the Beinecke includes a wealth of Berssenbrugge’s writing and papers. These include correspondence with many poets and artists such as John Ashbery, Charles Bernstein, Susan Bee, Ray DiPalma, Rachel Blau Duplessis, Joy Harjo, Ron Padgett, and Arthur Sze. The curious researcher can also find Berssenbrugge’s own drafts. Many are of unpublished poems, and contain Berssenbrugge’s notes to herself on her poetic process. The collection also contains wonderful teaching materials from throughout Berssenbrugge’s career, including poems written by elementary school students in her workshops. 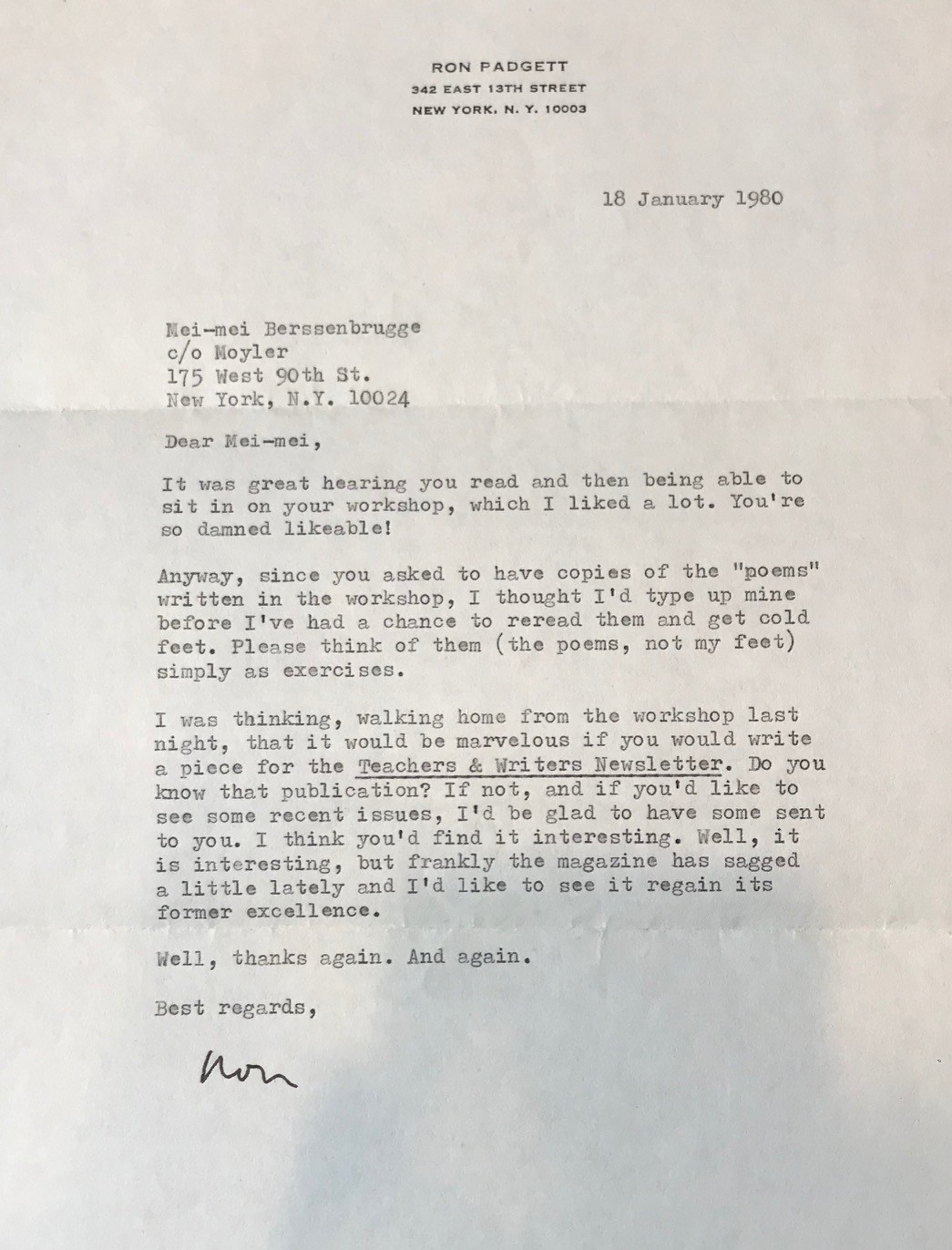 A letter from Ron Padgett to Mei-mei Berssenbrugge in 1980 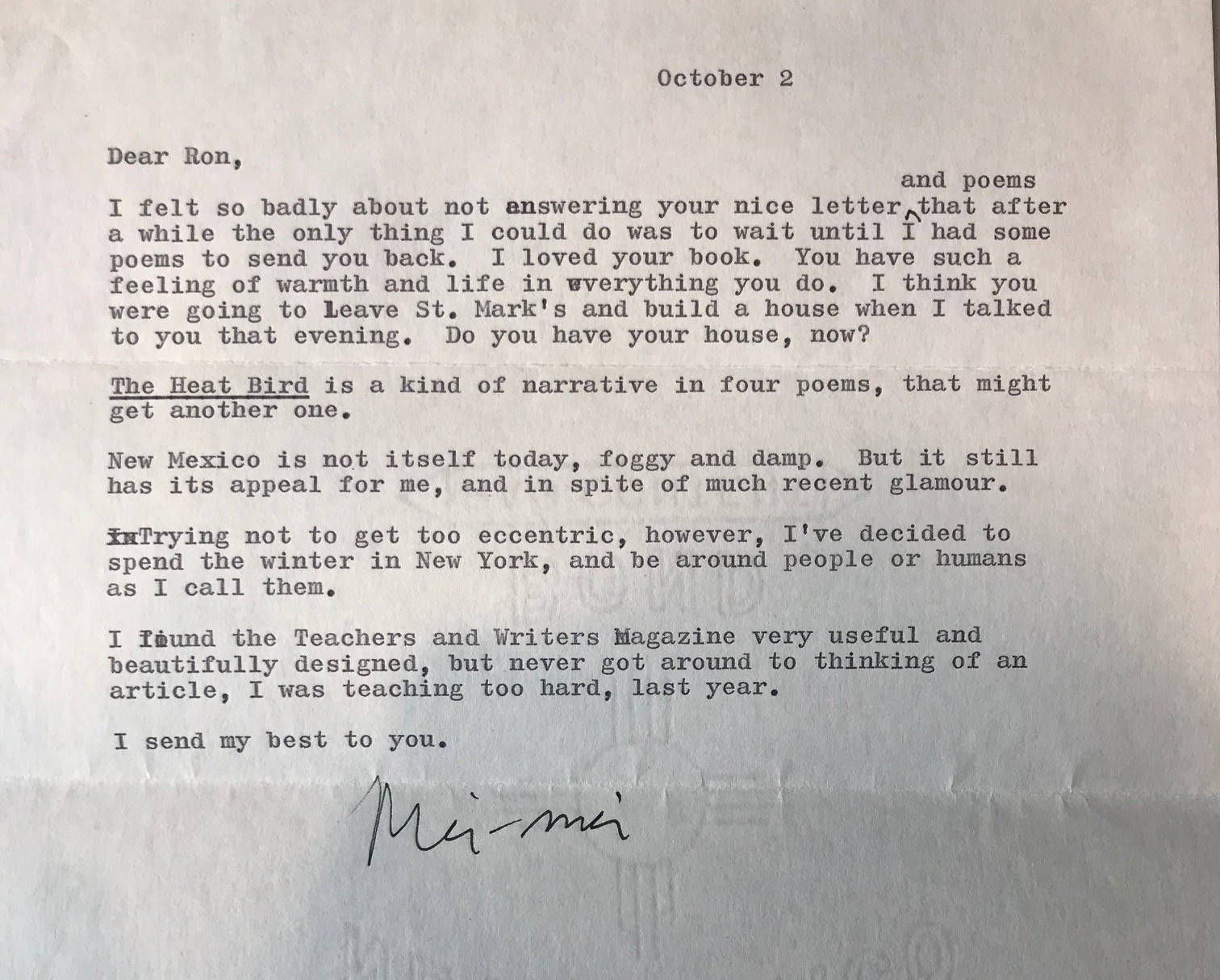 First image: Many of the poetic drafts in Berssenbrugge’s papers are composed of lines cut apart and put back together, like in this poem. These drafts present an opportunity to explore Berssenbrugge’s poems in relationship to collage, and offer a window into how Berssenbrugge uses the space between lines.