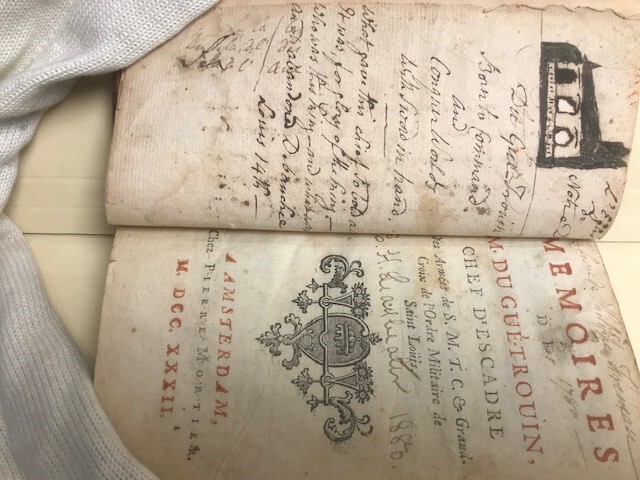 A new acquisition of annotated books and a silhouette portrait owned by descendants of Philip Morin Freneau (1752-1832) offer evidence of reading, writing, and book ownership by the early American poet and his family at their home in Mount Pleasant, New Jersey.

Freneau owned a copy of Memoires de M. du Gué-Trouin (Amsterdam: Mortier, 1732). A French naval officer during the War of Spanish Succession, René Du Guay-Trouin first published his memoirs in 1730.  Freneau’s copy bears his ownership signature on the title page, dated 1780, the same year that Freneau was imprisoned by the British during his service in the New Jersey militia and on a privateer in the Caribbean during the American Revolution.  Intriguingly, the book contains two extended annotations by Freneau, apparently draft poems:

On a preliminary page:

With Sword in hand.

What gave this chief so bold a wing

It was for glory of the king –

Who was this king – and what was he 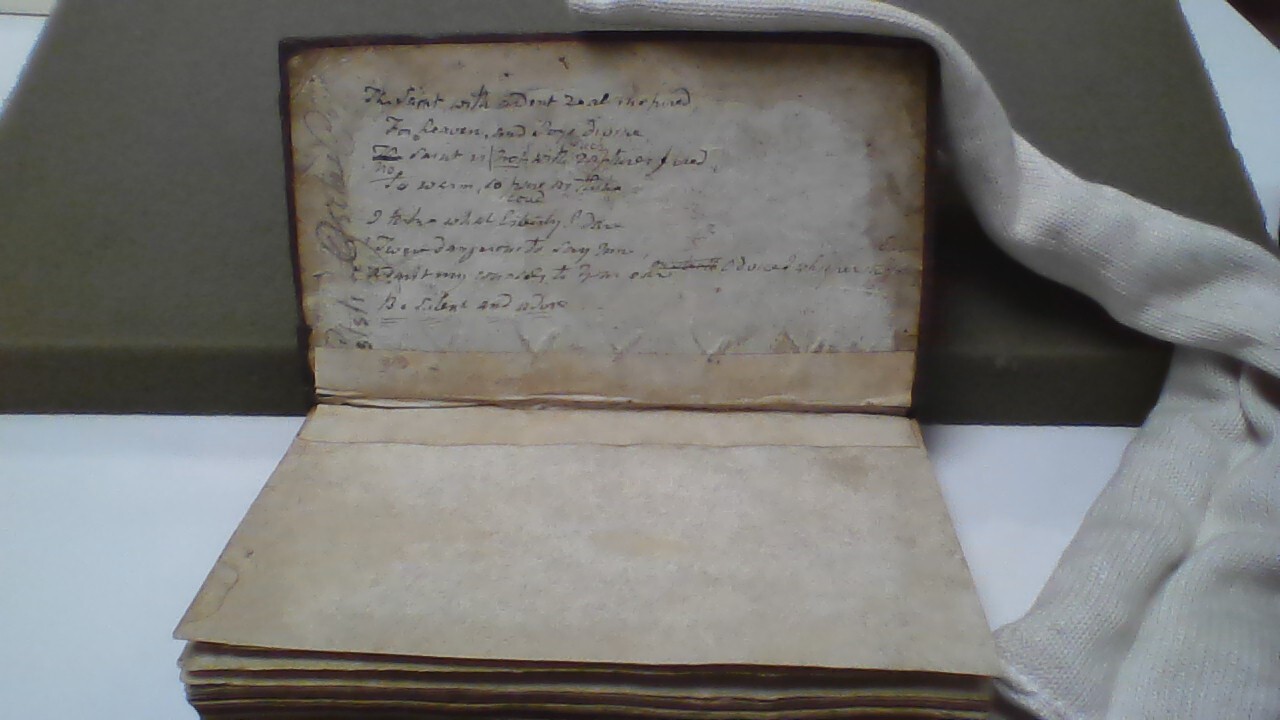 On the back pastedown, with alternate wording noted by Freneau transcribed in brackets:

“The saint with ardent zeal inspired

To heaven and joys divine

[The] No saint is [not] with such raptures fired

I take what liberty I dare

Be silent and adore”

On a preliminary page, a third manuscript poem, in an unidentified hand, and scored through, begins “So of Anchises he began a lay…” 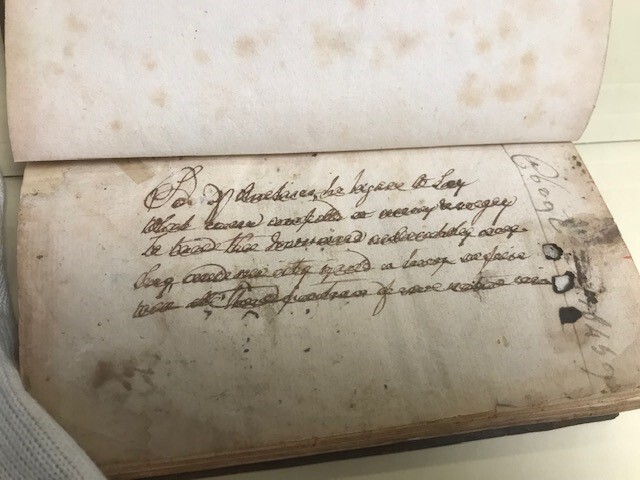 Poems written between the years 1768 & 1794 was printed on Freneau’s own press at his home in Mount Pleasant, New Jersey, in 1795.  This copy contains ownership inscriptions and stamps of his great-grandson Edward Henry Leadbeater (1855-1941), dated 1883. 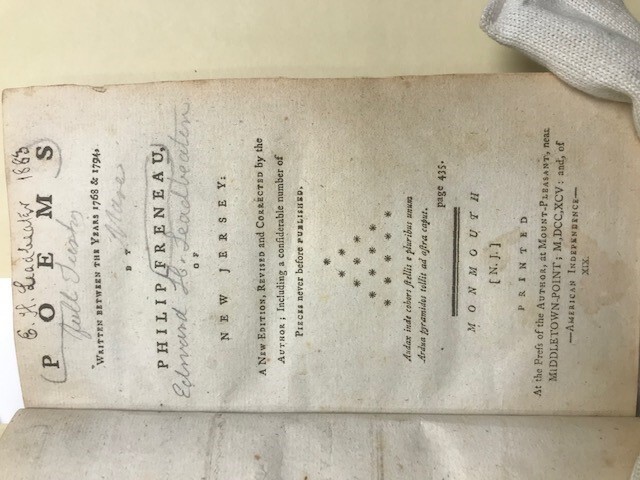 A copy of A collection of poems, on American affairs, and a variety of other subjects, chiefly moral and political:  written between the year 1797 and the present time (New York: David Longworth, at the Dramatic Repository, Shakespeare-Gallery, 1815), volumes 1 and 2, bound in 1 volume, contains ownership inscriptions of Freneau’s wife Eleanor Forman Freneau, undated, and their daughter Catherine Ledyard Freneau, dated 1848.  Affixed to preliminary pages are several undated paper cutouts of buildings and landscapes, possibly picturing the Freneau family’s home in Mount Pleasant, New Jersey.  Creation of the cutouts is attributed to Eleanor Forman Freneau by an unidentified annotator.  This volume also bears an ownership inscription of Edward Henry Leadbeater (1855-1941), dated 1883. 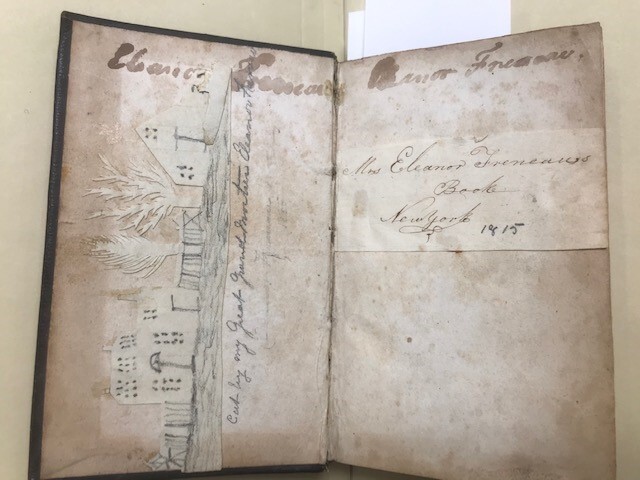 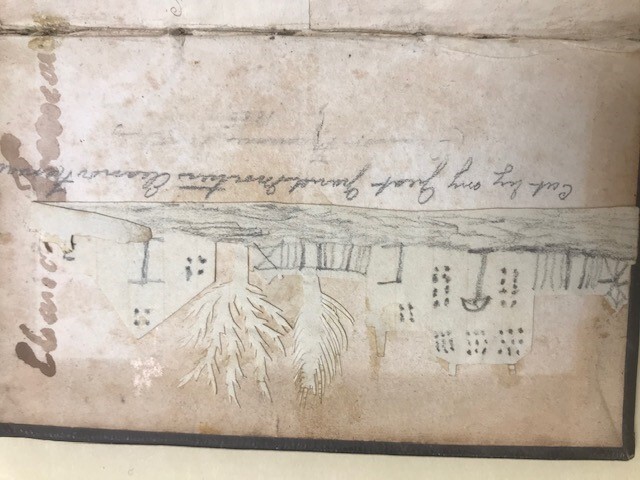 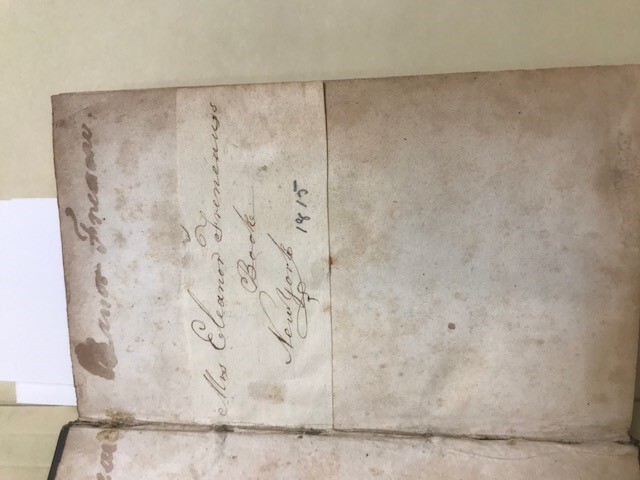 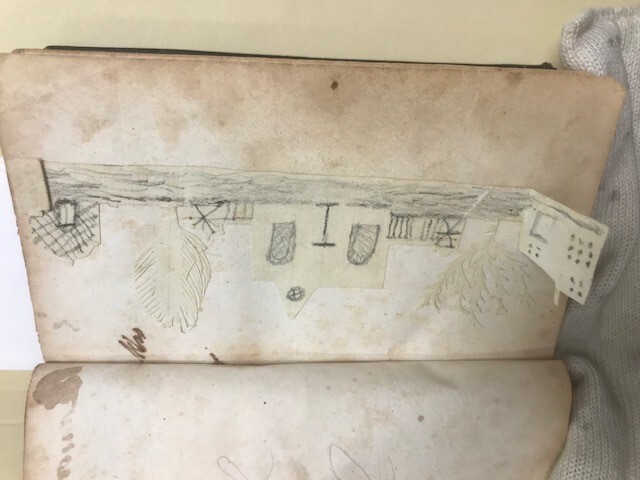 These books are accompanied by an untitled portrait of a man, consisting of paper cut in silhouette framing a faint pencil drawing, mounted together in a metal frame.  The undated portrait is accompanied by a manuscript note on a fragment of a 1939 printed calendar: “Philip Freneau, only picture take from life about the year 1775 by Longacre of Philadelphia.” The note may have been written by a descendant of Freneau, possibly his great-great-granddaughter Jacqueline Noel (1886-1964), who was the city librarian of Takoma, Washington.  The note appears to refer to American artist James Barton Longacre (1794-1869), though 1775 predates his year of birth. 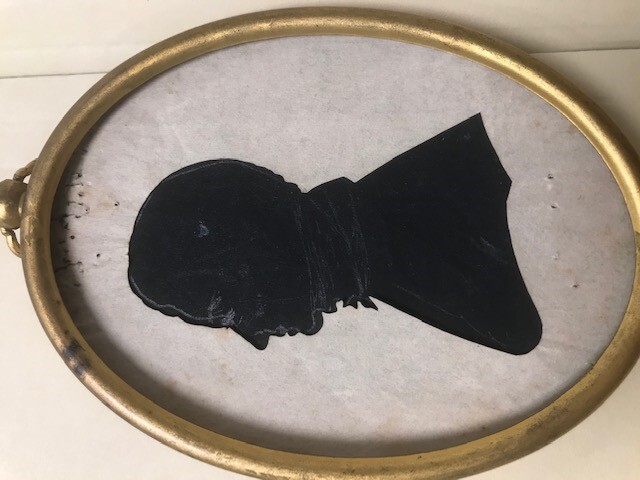 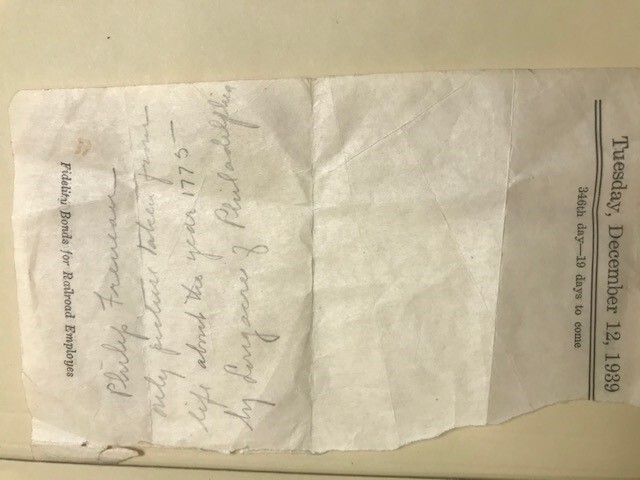 The Philip Morin Freneau Annotated Books and Portrait collection (call number YCAL MSS 1312) is open for research and may be paged in Beinecke’s reading room.  A full description is available in Yale’s online catalog, and additional catalog records have been added  to collocate these books with other copies already held by the Yale Library