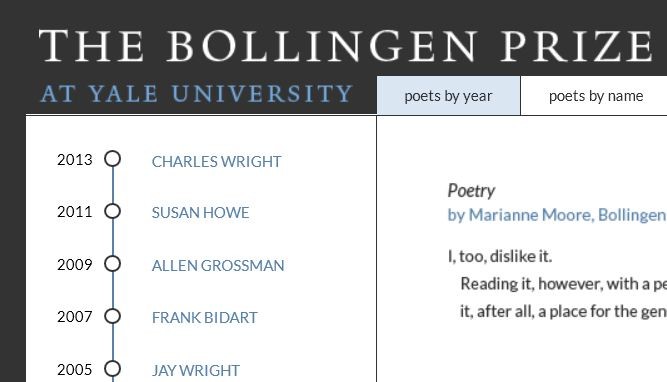 The Bollingen Prize for American Poetry has a new website: http://bollingen.yale.edu/

Among the most prestigious prizes available to American writers, the Bollingen Prize for Poetry has, for more than fifty years, been a force in shaping contemporary American letters. Early Bollingen Prize winners—Ezra Pound, Wallace Stevens, Marianne Moore, E.E. Cummings, to name a few—are today widely considered to be writers whose work defined a new American literature of the twentieth century. More recent winners—John Ashbery, Robert Creeley, Louise Glück, Anthony Hecht, John Hollander, Stanley Kunitz, W.S. Merwin, Gary Snyder, Mark Strand, and Richard Wilbur—represent an exciting stylistic diversity in American writing; the work of these poets will influence and characterize the future of American poetry in all its variety.

The prize was established in 1948 by Paul Mellon and was named after Carl Jung’s home in Switzerland. The Bollingen Prize for Poetry is awarded every two years for the best volume of poetry published in those years or for a poet’s lifetime achievement in his or her art. The poets, editors, critics, and teachers who have awarded and received the Bollingen Prize are at the root of its distinguished history. The list of judges includes many of the most important figures in twentieth-century literature—Robert Penn Warren, W.H. Auden, Katherine Anne Porter, Muriel Rukeyser, Robert Lowell, Adrienne Rich, Louis L. Martz, Marie Borroff, Joseph Parisi, J.D. McClatchy, and Harold Bloom among them.

Throughout its history, the Bollingen Prize for Poetry has recognized and celebrated the very best in American poetry. From its controversial beginnings in 1948, when the Fellows in American Letters of the Library of Congress awarded the prize to Ezra Pound for the Pisan Cantos, the Bollingen Prize has honored the literary accomplishments of poets whose work continues to define modern American literature.