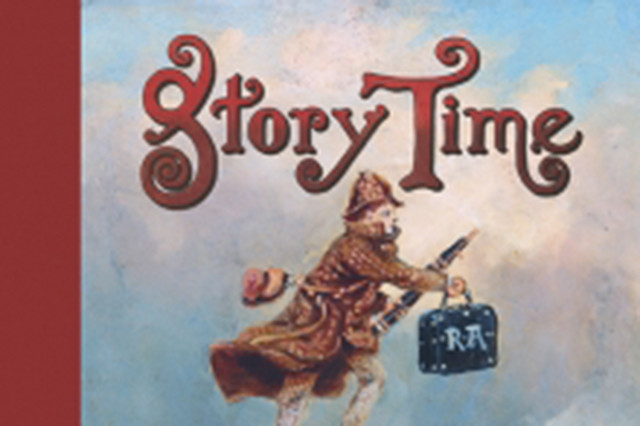 No casual collector, Shirley was the daughter of Walter Beinecke, one of the three brothers who planned and endowed Yale’s Beinecke Rare Book & Manuscript Library. With guidance from knowledgeable book dealers, she built a world-class research archive of children’s literature, featuring rare and important books, manuscripts, and artwork.

In 1987, Shirley began systematically donating her collection the Beinecke Library, basing annual donations on a specific theme. After she passed away in September 2004, the remainder of her collection arrived in New Haven, where it continues to grow and inspire scholarship.

“Story Time,” a new book of essays collected and edited by Timothy Young, the Beinecke’s curator of modern books and manuscripts, shows how the Betsy Beinecke Shirley Collection of American Children’s Literature has enriched and expanded people’s understanding of childhood and of the adults who write, illustrate, publish, and continue to cherish children’s books.

One of three books the Beinecke published this year with Yale University Press, “Story Time” is composed of 14 essays written by researchers who have worked in the collection, including Beinecke staff and Yale faculty members. Elizabeth Frengel, research librarian at the Beinecke, writes on the life and work of Ludwig Bemelmans, who created the “Madeline” series. Sandra Markham, the Lewis Legacy Archivist at the Lewis Walpole Library and a former archivist at the Beinecke, highlights penmanship books from the 18th century, including a copybook that once belonged to John Hancock.

Heather Klemann, who teaches in the Department of English, writes about how the work of Mo Willems, one of today’s bestselling and most critically acclaimed children’s authors, speak to parents as well as children. Katie Trumpener, the Emily Sanford Professor of Comparative Literature and English at Yale, examines the roles of children, mothers, and animals in the work of Robert McCloskey, winner of two Caldecott Medals.

Young, who has curated the collection since 2002, provides the introduction and an essay on  “Happy Deaths and Urban Dangers,” an exploration of books from the 17th century through the 20th century that sought to frighten children into being pious and well behaved.

The book, which will be officially published on Jan. 10, is available for pre-orders online. Young recently spoke with YaleNews about “Story Time” and the Shirley Collection. An edited version of the conversation follows:

The essays in the book cover a variety of subject matters. Can you talk a little about the collection’s breadth?

This hits upon the soul of the book, which is meant to provide a sense of the many different kinds of research that the collection enables.

I had consulted with Betsy Shirley’s daughters, Betsy Michel and Jody Gill, and our idea was to do something that would memorialize the collection and show why children’s literature is crucial in the research library setting. To that end, I thought over the last several years about the collection’s strengths. It is American, first and foremost, and it documents what American children were reading for education and for fun — how they learned and also how they played. It was important to Betsy Shirley to demonstrate that children had these expansive lives and that they read and imagined on their own as well as in classrooms.

Did you learn anything about the collection as you assembled the essays?

Every essay opened my eyes.  I was reading the essays as an editor — giving them a close reading to ensure the narrative flowed and made sense — and I often had to stop and read them from the beginning as a novice because the writers were telling me things about the collection that were completely new to me.

For example, I had been aware of Langston Hughes’s collaboration with Arno Bontemps on “Popo and Fifina,” the first mass-market children’s book featuring sympathetic main characters who were of African descent, but Michelle Martin brought this sense of context concerning the tension that surrounded the publication of the book in the mid-1930s that I didn’t know about.

Each essay took its subject to a place of scholarship where I myself had never had a chance to go. A couple of writers consulted collections at other libraries as well and made connections with our collection.

Also, the essays are approachable to lay readers, which was very important to me. I had asked the folks writing the essay, most of whom are academics, to try to write for a broad audience. They use some academic language, but they do a good job of explaining why certain terminology is used when writing about a certain theme or historical period.

How does the importance of illustrations in children’s books affect the scholarly approach to children’s literature?

You cannot talk about children’s literature without acknowledging that images carry a part of the weight. So much of children’s literature, particularly books for young audiences, relies on images to drive the narrative. In some cases, there are only images. In books for more mature children, with longer written narratives and chapters, pictures help to set the scene and spur the imagination. The images may be what stay with you after you put down the book.

If you look at a list of great children’s books, some might be considered wonderful because this person or that person wrote them. In others, the illustrator is the star of the show. You can have a back and forth over who is the great genius behind a particular work.

How do you draw scholars and students into the collection?

Yale does not have a degree program for children’s literature. It’s only taught in a few courses here. Children’s literature as a discipline only started to take shape in the 1970s, so it’s relatively young. People take it seriously, but it hasn’t matured to the point where there are a lot of degree programs. There is Ph.D. program at Trinity College in Dublin. The Beinecke hosts a visiting graduate student from Trinity every year because we have a lot of books and imprints from the United Kingdom and Ireland that aren’t available over there.

A lot of the researchers I engage with come from outside of Yale, but I take every opportunity to work with Yale faculty to bring classes and students into the library to study and work with the collection. If an undergraduate expresses interest in the collection, I try to give them a lot of attention and point them to interesting things because they may end up doing important work in the field.

How do you approach expanding the collection?

It’s a big responsibility. It’s a beautiful collection, and we’re fortunate that we can build on it thanks to the Beinecke family.

I knew Betsy Shirley very closely for two years before she passed away. She was always very clear and direct when talking with me. She gave me a crash course in understanding her collection and understanding her rationale for adding to it.

There’s no limit of materials that I could bring in to the library. The challenge is to think about what is good for research, what we can catalog and care for. It is also to try to think with Betsy in my mind a little bit: What would Betsy like? Luckily, her daughters were involved with the collection, and I have spoken with them over the years, and their feedback has been very helpful.

Over the last five or six years, I’ve focused a bit on acquiring the archives of people who make children’s books. A lot of people visit the library to do archival research — it’s one of our great strengths. I wanted to see what we could acquire that would document the growth of the children’s book, especially in the 20th century. I acquired the archive of Ingri and Edgar Parin d’Aulaire, who made this wonderful suite of books and won several major awards for their work, including the Caldecott Medal.  I also acquired the papers of Russell and Lillian Hoban, who created the Frances books. Of course, we were also fortunate to acquire Mo Willems’ papers.

Additionally, I’ve tried to document people who made really great books that kids devoured but who didn’t become household names.

While preparing “Story Time” for publication, I had to contact about 15 estates and publishers for permission to use images in the book. I had to reach out to Thacher Hurd, who is the son of Clement Hurd — the illustrator who worked with Margaret Wise Brown on “Goodnight Moon” and “The Runaway Bunny.” During our phone conversation, he said something that curators love to hear: “Oh, by the way, I still have my father’s papers. What should I do with them?”

Well, the second batch of his father’s papers will arrive at Yale this month. Most of the “Goodnight Moon” material is in Minneapolis, but we’ve acquired some materials that were precious to Hurd, including his complete dummy book for “The World is Round,” which he did with Gertrude Stein in 1938 for William R. Scott. We have Stein’s papers at the Beinecke, so this provides a crucial nexuses between modernism and children’s literature.

What do you hope readers of “Story Time” will be thinking about after the finish the essays?

I’ve read a lot of essays on children’s literature, and there is a lot of wonderful stuff, but it can get into the weeds a bit with the very dense critical apparatus. I wanted this book to be attractive, featuring a lot of great images to provide a sense of the wonder and joy discussed in the essays. I wanted it to be fun to read, but the goal is that the reader will understand that all the contextual issues that surround adult literature are also happening in children’s literature. The child was the reader, but illustrator, writer, agent, publisher, printer, and distributor were parts of an adult network. There are lots of really interesting stories about how the books came to be or almost didn’t come to be; how they were promoted so that some books and authors became famous while others didn’t; and also about the editorial method of creating a children’s book.

The idea that a beautiful book springs fully formed from an author of illustrator’s mind is a little bit of a myth. “Story Time” explains the work of making books a physical product without, I hope, making it seem dull or stripping the joy from it. It provides a window into the world in which children’s books were created and how they survived through years of readers and collectors to become evidence of how we were educated and entertained.