New From our Collections: What About This by Frank Stanford 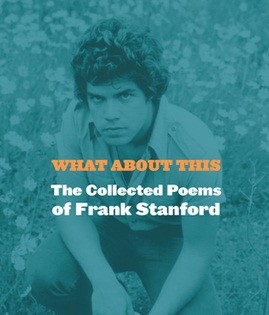 From the publisher: Largely out of print and unavailable for decades, the singular poetic voice of Frank Stanford has been propelled to mythic status in the years since his death in 1978. Upon his suicide at age 29, the poet left behind dozens of unpublished manuscripts, as well as uncollected poems, stories, and fragments–to augment 10 published books of poetry and a collection of short stories. The amount of writing Stanford generated in such a short life is staggering, and his poetry is further solidified beyond its quantity by a confident, ungovernable voice that moves effortlessly among surrealism, colloquial speech, racial politics, cultural memory and “the things which can pass through / your mind when the fish don’t bite.” This long overdue, comprehensive retrospective collects from all of Stanford’s previously published work, together with unpublished manuscripts, ungathered poems, and carefully chosen drafts and fragments. Excerpts (and outtakes) from his 15,283-line poem “The Battlefield Where the Moon Says I Love You,” are included to punctuate the collection, alongside sample of rare archival material never before seen in print.