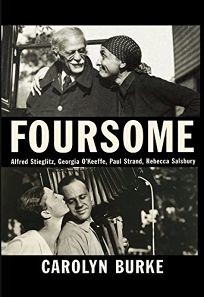 The lives of a quartet of some of the most influential painters and photographers of the early 20th century are chronicled in this intimate and exhaustively researched group biography. Burke (No Regrets: The Life of Edith Piaf) follows the careers of Alfred Stieglitz, Georgia O’Keeffe, Paul Strand, and Rebecca Salsbury as they made a “ ‘quiet challenge’ to those who refused to see photography as art.” The book opens in 1921 with Stieglitz’s New York City exhibit that contained his works of an unidentified nude that, Burke writes, captured the “creative zest and sexual desire in his portraits.” From there, Burke follows Stieglitz, O’Keeffe, Strand, and Salsbury all over New York City as they held popular exhibits, and, later, to Taos, N.Mex., where they became part of the town’s art scene. The four inspired each other professionally, through mentorship and as photo subjects (O’Keeffe posed for Stieglitz’s early nudes), and romantic relationships between the two couples (Stieglitz and O’Keeffe, Strand and Salsbury) developed: Salsbury once described her connection to Strand by saying, “You… seem to be in my hands, my feet, my breasts, stirring in my womb—and outside me too in everything that is beautiful.” This biography offers detailed insight into one of the most important periods in American art.