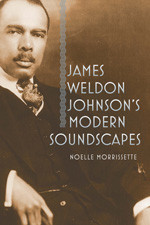 From the University of Iowa Press:

“Noelle Morrissette brings to the forefront an undervalued aspect of Johnson’s amazing career—his attempt to bridge the separation between black political activism and black popular culture. Impressively informed but quite accessible and engaging, James Weldon Johnson’s Modern Soundscapes is an authoritative reconsideration of critical approaches to Johnson. I expect it to be quickly established as one of the essential books for anyone interested in Johnson, and an important methodological model for any scholar working in this period of American cultural history.”—John Ernest, University of Delaware

“An engaging, thought-provoking book. This is an important work in African American literary studies, American studies, and the growing field of sound studies.”—Miriam Thaggert

“A timely and much needed book on James Weldon Johnson, an African American Renaissance man who bridges the gap between Reconstruction and the New Negro Movement.”—Dolan Hubbard

James Weldon Johnson’s Modern Soundscapes provides an evocative and meticulously researched study of one of the best known and yet least understood authors of the New Negro Renaissance era. Johnson, familiar to many as an early civil rights leader active in the National Association for the Advancement of Colored People and an intentionally controversial writer on the subject of the significance of race in America, was one of the most prolific, wide-ranging, and yet elusive authors of twentieth-century African American literature.

Johnson realized early in his writing career that he could draw attention to the struggles of African Americans by using unconventional literary methods such as the incorporation of sound into his texts. In this groundbreaking work, literary critic Noelle Morrissette examines how his literary representation of the extremes of sonic experience—functioning as either cultural violence or creative force—draws attention to the mutual contingencies and the interdependence of American and African American cultures. Moreover, Morrissette argues, Johnson represented these “American sounds” as a source of multiplicity and diversity, often developing a framework for the interracial transfer of sound. The lyricist and civil rights leader used sound as a formal aesthetic practice in and between his works, presenting it as an unbounded cultural practice that is as much an interracial as it is a racially distinct cultural history.

Drawing on archival materials such as early manuscript notes and drafts of Johnson’s unpublished and published work, Morrissette explores the author’s complex aesthetic of sound, based on black expressive culture and cosmopolitan interracial experiences. This aesthetic evolved over the course of his writing life, beginning with his early Broadway musical comedy smash hits and the composition of Autobiography of an Ex-Colored Man(1912), and developing through his “real” autobiography, Along This Way (1933). The result is an innovative new interpretation of the works of one of the early twentieth century’s most important and controversial writers and civil rights leaders.